This LAN is your LAN: Storage world still keen on high-speed Ethernet, luckily for Mellanox

Hot on the heels of Intel's reported acquisitive interest, Ethernet and InfiniBand networker Mellanox has closed out its final quarter of 2018 with an Ethernet-boosted bottom line.

For its fourth quarter of fiscal 2018, ended 31 December '18, the firm reported $290.1m in revenues, up 22.1 per cent year-on-year, and $42.8m profit, up from a loss of $2.59m the year before. Mellanox chalked up its top line boost to "record sales" in its Ethernet switches and LinkX cables and transceivers segment. 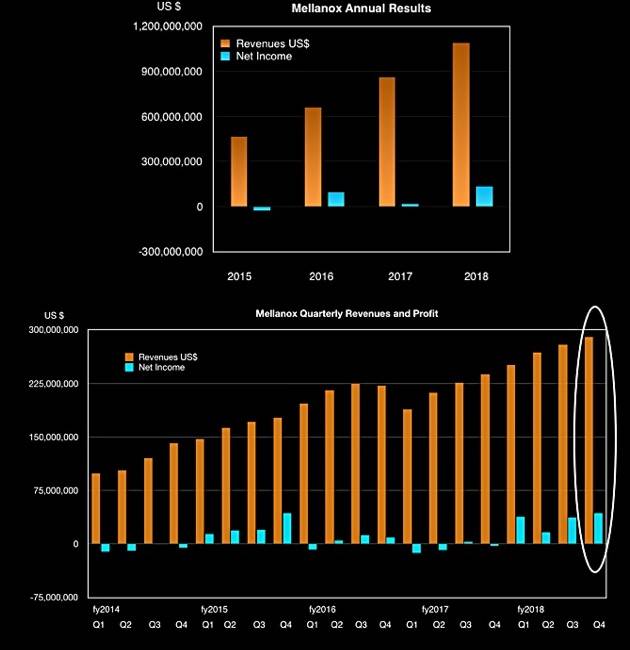 Mellanox revenuea and profits with a blow-out final 2018 quarter,

Ethernet sales rose 21 per cent year-on-year, with 25Gbit products selling well and the transition to 100Gbit tech starting; 2018 sales were 2.5 times those in 2017.

InfiniBand sales grew less strongly; they were up 8 per cent on the year, with 200Gbit HDR product sales ramping up. It expects InfiniBand revenue to grow in the upper single to lower double-digit range in 2019 supported by the race to Exascale supercomputing.

The earnings call was revealing about Intel’s competing Omni-Path InfiniBand products, with Mellanox president and CEO Eyal Waldman saying: "We're not seeing demand for Omni-Path almost at all ... So InfiniBand is gaining momentum and taking big market share from Omni-Path.”

China is seen as a growth market by Mellanox, notwithstanding US-China trade tensions.

Waldman was asked to compare the Chinese and US markets, and said: “First, in 2018, we grew very nicely, much more than in the US, in China" - without getting specific.