I would never betray the trust of customers, says man perhaps doing exactly that 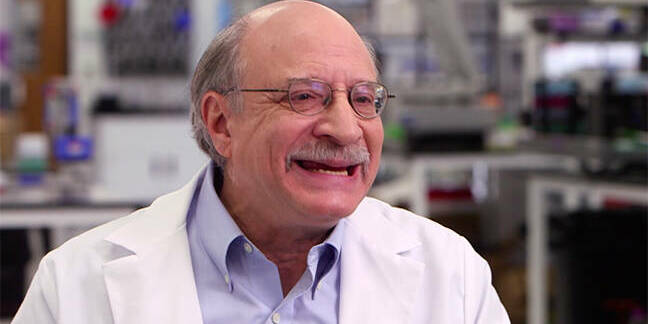 Comment Some would argue he has broken every ethical and moral rule of his in his profession, but genealogist Bennett Greenspan prefers to see himself as a crime-fighter.

"I spent many, many nights and many, many weekends thinking of what privacy and confidentiality would mean to a genealogist such as me," the founder and president of FamilyTreeDNA says in a video that appeared online yesterday.

He continues: "I would never do anything to betray the trust of my customers and at the same time I felt it important to enable my customers to crowd source the catching of criminals."

The video and surrounding press release went out at 10.30pm on Thursday. Funnily enough, just a couple of hours earlier, BuzzFeed offered a very different take on Greenspan's philanthropy. "One Of The Biggest At-Home DNA Testing Companies Is Working With The FBI," reads the headline.

Here's how FamilyTreeDNA works, if you don't know: among other features, you submit a sample of your DNA to the biz, and it will tell you if you're related to someone else who has also submitted their genetic blueprint. It's supposed to find previously unknown relatives, check parentage, and so on.

And so, by crowd sourcing, what Greenspan means is that he has reached an agreement with the FBI to allow the agency to create new profiles on his system using DNA collected from, say, corpses, crime scenes, and suspects. These can then be compared with genetic profiles in the company's database to locate and track down relatives of suspects and victims, if not the suspects and victims themselves.

He insists that this approach "does not change our policy never to sell or barter our customers’ private information with a third party" because it doesn't give the Feds access to information beyond an ordinary user.

"We came to the conclusion that if law enforcement created accounts, with the same level of access to the database as the standard FamilyTreeDNA user, they would not be violating user privacy and confidentiality," he argues.

"In order for the FBI to obtain any additional information, they would have to provide a valid court-order such as a subpoena or search warrant."

In short, FamilyTreeDNA has agreed to actively work with the FBI to give the g-men access to two million genetic profiles.

Those profiles have been built by customers who have paid between $79 and $199 to have their generic material analyzed, in large part to understand their personal history and sometimes find connections to unknown family members. The service and others like it have become popular with adopted children who wish to locate birth parents but are prevented from being given by the information by law.

You heard the latest Chinese CRISPRs? They are real: Renegade bio-boffin did genetically modify baby twins

However, there is a strong expectation that any company storing your most personal generic information will apply strict confidentiality rules around it. You could argue that handing it over to the Feds doesn't meet that standard. Greenspan would disagree.

"Greenspan created FamilyTreeDNA to help other family researchers solve problems and break down walls to connect the dots of their family trees," reads a press release rushed out to head off, in vain, any terrible headlines.

"Without realizing it, he had inadvertently created a platform that, nearly two decades later, would help law enforcement agencies solve violent crimes faster than ever."

Crime fighting, it seems, overrides all other ethical considerations.

Unfortunately for Greenspan, the rest of his industry doesn't agree. The Future of Privacy Forum, an organization that maintains a list of consumer DNA testing companies that have signed up to its privacy guidelines struck FamilyTreeDNA off its list today.

Or, in other words, while catching crims is desirable, would people submitting their DNA to trace their family history really be comfortable knowing they're handing over the genetic profile to what is essentially a police database. That their DNA may match that found at a crime scene, that arrests and awkward questions may follow, even though they've not broken the law. That certain freedoms might have fallen by the wayside.

Is that the sort of thing a respectable DNA-testing facility should consider a good revenue source?

A spotlight has been on the DNA industry since it was revealed the eventual arrest of the so-called Golden State Killer more than 30 years after a series of horrific murders and rapes was tied to the FBI using an open-source DNA service to track down potential suspects.

While Greenspan seems to believe that his vast database can be a force for good, others are deeply concerned about the privacy implications. It's unclear when FamilyTreeDNA started opening access to its database, but it's fair to say that the company was aware its approach would not be warmly welcomed by paying customers since it made no mention of the agreement prior to being contacted by journalists.

Greenspan insists that everything is fine, however, and he has even gone to the trouble of allowing customers to avoid having their DNA profiles searched by the government. You just have to login and opt out.

If you do do that, however, you will become invisible to others who have put in their own DNA, rather than, you know, someone else's from a crime scene. But, to be fair, it is impossible to imagine how to design any other system. Its the Feds or nothing.

We have no doubt that Greenspan's entirely convincing arguments will be embraced by all his customers. In fact, we imagine that anyone learning that they can pay to have their DNA details handed over to the FBI will jump at the chance to improve society by allowing criminals to be tracked down faster. We all owe Greenspan and FamilyTreeDNA a debt of gratitude for his ethical and moral stance. ®