Seagate was caught out by an unexpectedly deep drop in disk drive demand and saw its revenues fall 7 per cent. Along with the rest of the tech world, it talked about a recovery mid-year, and promised world+dog at least one more lousy quarter.

The Cupertino firm's revenue dive – at least percentage-wise – was less than that of Western Digital, which saw revenues slump 20 per cent. It was hit by demand drops in both disks and SSDs. Seagate's flash business is a relative drop in the ocean in comparison, but a tad healthier.

That business was grouped with enterprise systems and other stuff, which altogether netted $225m. CFO Gianluca Romano said revenues for this "non-hard disk" group were "up 8 per cent year-over-year – mainly driven by higher SSD revenue".

The company shipped 87.4EB of capacity, down from the 87.5EB shipped a year ago, and averaging out at 2.4TB/drive. The big fall was in nearline drive demand, as a Seagate chart shows. It expected a fall two quarters ago but not this deep. 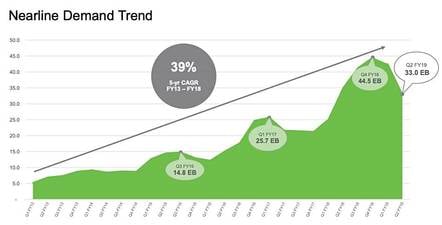 I would say that the cloud is weaker than what we've thought 90 days ago...

There was also a significant demand drop in Edge and client consumer electronics drives.

In the earnings call, CEO Dave Mosley said: "It really looks like we're in the trough now again and the question is how deep is the trough and how wide is it and so on?"

He added: "I would say that the cloud is weaker than what we've thought 90 days ago... We're going to take our medicine a little bit this quarter by making sure we turn off the factories, don't overbuild the wrong stuff so that we come out as fast as we can."

The drop was attributed to customers digesting an inventory of drives, and to "some cloud customers are also pausing ahead of next generation mass storage technology transitions that will deliver significant capacity, performance and total cost of ownership benefits".

That means 16TB next-generation drives, not the coming HAMR drives which will follow them.

The company said it was closely managing expenses and optimising product mix for profitability. There was no mention of any coming headcount reductions.

Seagate said demand would rise in the second half of this year, meaning the next quarter will be poor, with $2.3bn revenues forecast – a 17.9 per cent fall on the year-ago $2.8bn. There was no forecast for the quarter after that, but it could well be another weak one. ®