Pics, video Scientists believe they may have found a second meteorite impact crater lurking under ice sheets on Greenland.

Researchers say they've clocked a hole measuring 22.7 miles (36.5 kilometres) wide caused by an ancient space rock slamming into our home world. The exact historical timing of the cosmic prang isn’t clear, though it appears ice has been eroding the crater for anywhere between a hundred thousand years and a hundred million years. Interestingly, the two kilometre-thick ice sheets covering it right now are at least 79,000 years old.

Evidence of the epic pit was taken from eleven datasets compiled from a variety of resources, including radar and satellite imagery of Earth’s poles and Greenland’s ice sheets. All together, it reveals tantalizing features of an impact crater.

The flat basin-like structure implanted into the bedrock has a circular rim with irregular peaks in its center. "We’ve surveyed the Earth in many different ways, from land, air and space – it’s exciting that discoveries like these are still possible," said Joe MacGregor, a NASA glaciologist and co-author of the research published on Monday in the Geophysical Research Letters.

MacGregor was also on the team that found the first impact crater buried under Greenland ice sheets last November. The scientists named that one the Hiawatha impact crater, and it’s about 19 miles (30.5 kilometers) wide. The new candidate crater was spotted just 114 miles away (183 kilometres) from the earlier discovery. So yes, that's two meteorite craters near each other under Greenland's ice sheets – lightning may or may not strike the same place twice, but space rocks definitely can, relatively speaking. 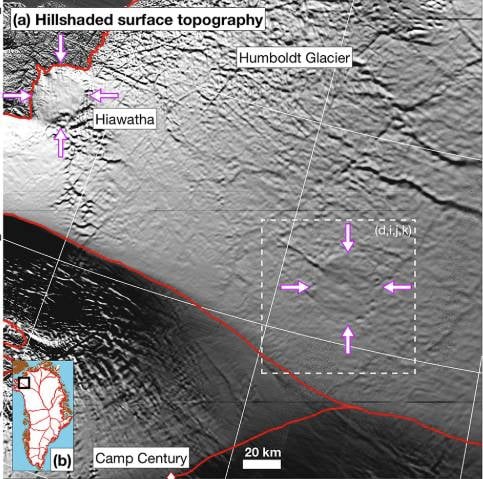 The faint outline of the 19-mile wide Hiawatha impact crater, and the new 22.7 mile-wide candidate marked out my four pink arrows to its right. Image credit: MacGregor et al.

"I began asking myself ‘Is this another impact crater? Do the underlying data support that idea?’," MacGregor said. "Helping identify one large impact crater beneath the ice was already very exciting, but now it looked like there could be two of them."

Laser-zapping scientists will save the Earth from meteorite destruction

Although the holes are close to one another, they probably weren’t formed at the same time as the icy deposits sitting above the Hiawatha impact crater are younger. The close proximity of both craters is probably down to two different impact events that happened to occur near each other by chance.

If the new discovery is verified as a crater, it’ll be the 22nd largest one ever found. The biggest one, the Vredefort crater, stretches more than 190 miles across in South Africa, and was declared an UNESCO World Heritage Site.

MacGregor believes that researchers might even find a third crater: "The existence of a third pair of unrelated craters is modestly surprising but we don’t consider it unlikely. On the whole, the evidence we’ve assembled indicates that this new structure is very likely an impact crater, but presently it looks unlikely to be a twin with Hiawatha." ®