If you’re living in Earth's southern hemisphere, chances are you may be able to see some of the stars in a newly identified cosmic river that's flowed through the Milky Way for hundreds of millions of years.

Astronomers say the freshly discovered gigantic cluster of stars is passing relatively close to our Solar System. The cluster contains at least 4,000 stars that have been steadily moving together across the night sky like a river, covering almost the entire southern sky. To be clear, the stars aren't new discoveries: the fact they are in a cluster together is the revelation here.

“Most star clusters in the galactic disk disperse rapidly after their birth as they do not contain enough stars to create a deep gravitational potential well, or in other words, they do not have enough glue to keep them together,” said Stefan Meingast, lead author of the study published today in Astronomy & Astrophysics journal and an astronomer working at the University Vienna, Austria.

“Even in the immediate solar neighborhood, there are, however, a few clusters with sufficient stellar mass to remain bound for several hundred million years. So, in principle, similar, large, stream-like remnants of clusters or associations should also be part of the Milky Way disk."

It is estimated the stellar river formed about a billion years ago, and has circled the Milky Way four times already. 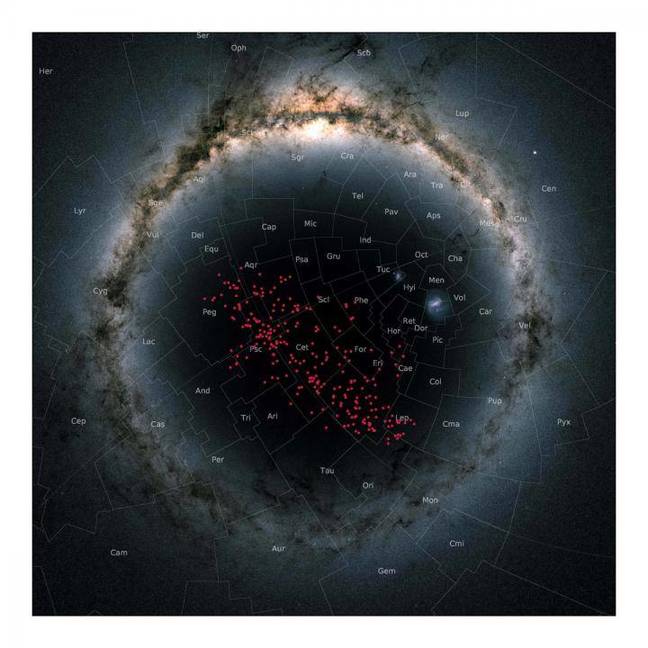 The projection of the stellar stream centered around the south Galactic pole. The Milky Way is curved around in an arc, and the red points are the stars in the cluster. Image credit: Astronomy & Astrophsyics.

The researchers from the University of Vienna and Harvard University spotted the stellar stream by carefully mapping the 3D motion of 200 stars using data taken from Europe's Gaia spacecraft. The stars' distribution and movements showed telltale signs that they were all locked in a clump together, and are being pulled apart by the Milky Way’s gravitational field.

"Identifying nearby disk streams is like looking for the proverbial needle in a haystack,” said João Alves, co-author of the paper and an astrophysics professor at the University of Vienna.

“Astronomers have been looking at, and through, this new stream for a long time, as it covers most of the night sky, but only now realize it is there, and it is huge, and shockingly close to the Sun. Finding things close to home is very useful, it means they are not too faint nor too blurred for further detailed exploration, as astronomers dream."

The team hope that studying the river of meandering stars will give them a better understanding of the the Milky Way’s mass and gravitational field, and help scientists work out how it got its stars. ®

Getting to them is, however, quite another kettle of fish