Isn't it ironic, don't you think? 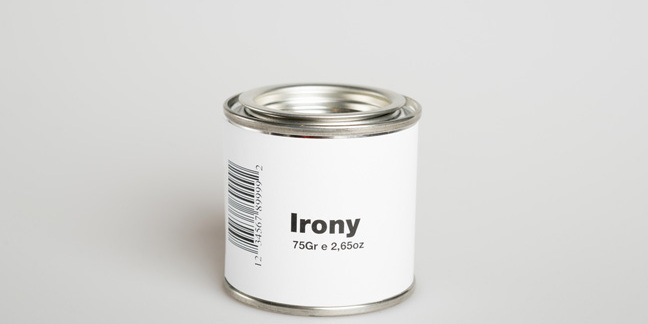 It is ironic that Oracle, which normally tries to make class-action suits "disappear into arbitration", is now taking an anti-arbitration stance in a pay dispute, a judge in San Francisco said late last week.

The case dates back to 2017, when former Oracle staffer Marcella Johnson sued Big Red, saying it "systematically denies" its sales reps their commissions. She asked a California court to force Oracle to participate in arbitration over wage claims – which the Ninth Court did.

However, Oracle appealed against the decision in December that year, arguing that the Ninth Court failed to carry out the first in the two-step process to compel arbitration.

The problem in this case is that there have been two arbitration agreements drawn up, and the parties disagree over which should be used.

The first does not include a class-action waiver, while the second does – meaning Johnson would have to enter arbitration alone. Unsurprisingly, Oracle favours the former and Johnson's team favours the latter.

The Ninth Court effectively delegated this decision to the arbitrator in the case – but Oracle argues that in doing so, it "[put] the cart before the horse", as it hadn't determined that there was a (and the firm is putting great emphasis here on the singular) valid, existing agreement.

In a hearing held last Friday in front of the United States Court of Appeals for the Ninth Circuit, the panel quizzed Oracle's counsel Brendan Dolan on this argument.

In particular, Judge Robert Lasnik said the idea that Oracle was taking an anti-arbitration stance lent a "man bites dog" aspect to the case.

"Usually, you're the big corporation, the ones imposing arbitration on people... You're the one who ends up paying JAMS [Judicial Arbitration and Mediation Services] for both sides... because the plaintiff doesn't want to be there," he said. "You're the ones who make these class actions disappear into arbitration."

Lasnik added that Oracle had "got all the power", in that it sends out sales agreements and determines how long someone has to sign it. "When the corporation has all the power, doesn't that enter into our analysis a bit here?"

In response, Dolan said it didn't enter into it "at this juncture", but might in the consideration of the second in the two-step process under discussion.

Referencing this exchange, plaintiff's counsel Michael Palmer said Oracle knew what the agreements said when it drafted them.

"Oracle has to face the facts that these are the documents they wrote and they must be required to actually abide by it," he said.

The fact the firm "keeps on trying to fight this out in the courts" is "so ironic", Palmer said, given that they usually go to "intense effort to have everything resolved in arbitration".

For his main argument against Oracle's appeal, Palmer pointed to the court's statement in the decision, which said: "There's no question that there's an arbitration agreement, the question is which of the two apply."

Dolan countered this, saying that the Federal Arbitration Act "does not use the plural" in its reference to agreements, and that the court had effectively shifted responsibility to the arbitrator.

"It kind of said, well there's two agreements, there's a dispute between the parties... I can't decide, I'm gonna throw up my hands and I'm gonna kick it to the arbitrator," he said.

However, Judge Johnnie Blakeney repeatedly asked Dolan if his team had done enough to bring this specific question to the attention of the District Court at the time, calling on him to specify exactly where this was raised during the case.

Dolan struggled to suggest a single, specific instance, rather saying that it had been referred to "repeatedly" – and added that, "in fairness" to the court, the Federal Arbitration Act is a "quagmire".

Blakeney picked up on this, saying: "Don't you think the district court should be appraised of what the issues are that the parties are asking the District Court to determine in this quagmire?"

She went on to say that there is an obligation for counsel and the courts to cooperate on such matters, which Dolan accepted. But he added that he believed his team did articulate where it felt the court's focus should be and that the court was obligated to "apply the right law".

The panel of judges are now to consider the appeal from Oracle, with Rawlinson saying it was a "challenging" case. ®