Twilight of the sundials: Archaic timepiece dying out and millennials are to blame, reckons boffin

How is there so much villainy wrapped up in one generation? 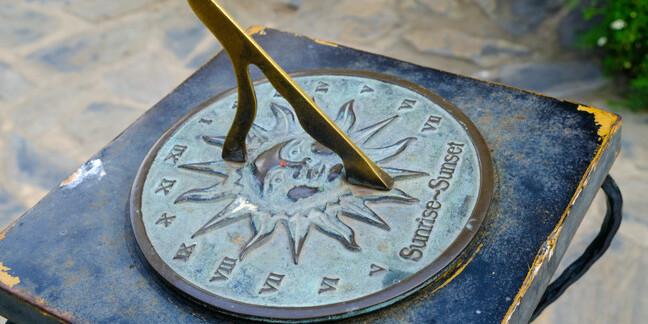 OK, what's the time? No, this thing is clearly broken

When was the last time you appreciated a sundial? I'll give you a mo...

Nothing? We could be seeing even less of the ancient time-telling method as those with the knowledge to build sundials pass on.

Seventy-six-year-old Dr Frank King, a fellow in computer science at Churchill College, University of Cambridge, has told the BBC that he fears sundials could go extinct if the yoof don't get involved.

"Sundials are old hat," he told the Brit broadcaster. "Those few people who are making innovative sundials are making extensive use of computerised tools to design them – that's a good thing.

"To get young people interested in sundials is extraordinarily challenging."

The boffin, who taught Raspberry Pi big cheese Eben Upton, railed against the state of education in the UK.

"How many school leavers have heard of Euclid?" [Why he brings up a Socratic philosopher when discussing geometry is beyond us – Ed]

King, who as Keeper of the Clock is responsible for Cambridge University's Great St Mary's Church timepiece, copped to an "obsession with time" and elegantly described sundials as "the perfect collaboration of science and art".

"Anything from atomic clocks to the most ancient of sundials I can tell you about."

King would likely be deeply saddened to know, then, that there are people of adult age out there incapable of reading analogue clocks.

Our notion of time over the 20th century was condensed into four unambiguous numbers, now always a glance away from the corner of whatever screen is to hand.

Would the death of sundials really be that terrible? Not only are they imprecise to read (oo, erm, is it 11:31 or 11:32? YES, IT'S IMPORTANT), but they're rarely seen outside a National Trust garden. They don't even work at night.

But if there's some way of guiding the millions of pre-teens making the uncanny split-second calculations of trigonometry and bullet velocity in Fortnite into a field of even more meticulous measurements, maybe there's hope for the old clock yet. ®

Zombie Cambridge Analytica told 'death' can't save it from the law

Comment No lie, says Zuck and co, it was a separate data thing that we forgot to mention