In preparation for next month's 30th anniversary of the proposal that gave us the world wide web, boffins at the behest of CERN have recreated the world's first web browser, and made it accessible as a modern web page.

Created by Sir Tim Berners-Lee, the ur-browser, first called WorldWideWeb, and later Nexus, was built from Objective-C in 1990 on a NeXT workstation to display its maker's HyperText Markup Language.

The browser's resurrection – click here to try it out – follows five days of hacking by an international team of nine developers, reunited after a previous effort to revive the original Line Mode Browser in 2013. 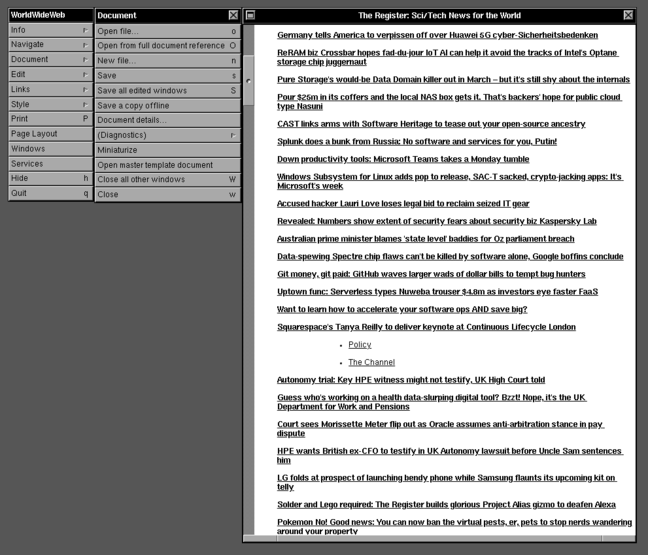 The server side part of the simulation comes from the Line Mode Browser source; binaries of various versions of WorldWideWeb/Nexus were also consulted. The project, unveiled this month, was built with JavaScript and the React framework.

The browser's monochrome window into the past includes a basic menu interface that features both functional and non-functional elements. It does allow you to open web pages, via the Document -> Open from full document reference menu, though they're all text. It serves as a reminder of how much the web has changed, for good or ill.

There are no images, videos, ads or ad tracking code. JavaScript, which wouldn't be invented until 1995, and Cascading Style Sheets (CSS), which wouldn't debut until 1996, have been employed to recreate the retro look and feel. Much attention went to the blocky aliased fonts. The color palette includes a four-option spectrum: black, white, and two shades of gray.

WorldWideWeb recognizes just 26 HTML tags – the term "element" was not a part of web development jargon.

One aspect of the original browser that got lost over time was that it was intended to be both a document viewer and editor.

"Today it's hard to imagine that web browsers might also be used to create web pages," the project's documentation explains. "It turned out that people were quite happy to write HTML by hand – something that Tim Berners-Lee and colleagues never expected. They thought that some kind of user interface would be needed for making web pages and links."

Modern browsers like Chrome retain the ability to edit loaded pages via the Inspect menu, but generally their tools for content display and editing have been separated.

Nowadays, web code tends to be difficult to read. It's often minified – compressed into a compact form to save space – or obfuscated – deliberately made obscure. Facebook web pages, for example, rely on impenetrable class names and words fragmented into multiple div elements to foil ad blockers.