There's no 'My' in Office, Microsoft insists with new productivity hub

If you like that then you'll just LOVE our 365 range 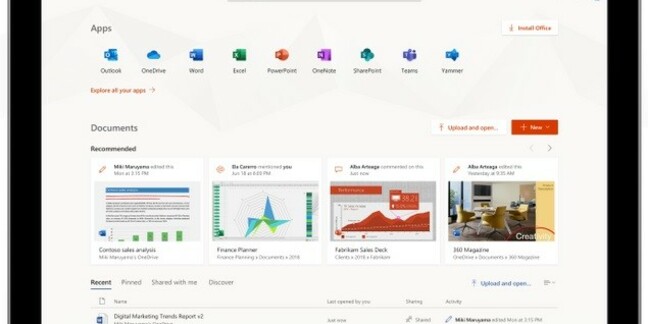 Microsoft has updated the My Office app and would like to remind users that there's a free, online version of the suite.

The purpose of the new Office app is to act as a hub for all things Office-y. Be it documents the user has recently worked on, or shortcuts to the Office apps themselves. And, oh, if you don't have that particular productivity app installed, the Office app will send you to where it can be downloaded or, significantly, off to the web version of Office.

While the previous "My Office" app had a definite whiff of 365 subscription about it, the new Progressive Web App (PWA) version makes the freebie incarnations of Word and its ilk easier to locate. And although that paid-for Office sub isn't required, you do, of course, need your own Microsoft account to access the goodies.

While some customers are likely to never touch the app – there is this thing called the Taskbar in Windows 10 to which commonly used Office apps can be pinned – Windows Insider head honcho Brandon LeBlanc was quick to express his delight with the new hub.

I am actually *loving* the new Office app for Windows 10 and use it quite a bit! If you haven't already - check it out! https://t.co/QpyVlPcIUO

Well, he would. It was, after all, flung out to Windows Insiders as a preview back in December and the feedback was that users found it handy for getting started with Office.

Once a user has been introduced to the free online versions of Word and its siblings, Microsoft is not shy about suggesting a closer look at Office 365.

Consumers aside, the Office app also has an eye on the enterprise. Admins can rebrand it, add third-party apps and plug in Microsoft Search.

The app is rolling out over the coming weeks as an update to My Office and will appear as one the Windows 10 pre-installed applications. ®