Inside HPE's $7.56bn quarterly revenues were $0.98bn storage revenues, 12.9 per cent of HPE's business. EVP and CFO Tarek Robbiati said in the earnings call: "We saw particular strength in all-flash arrays, which grew 20 per cent year-over-year driven by Nimble. Big data also had another strong quarter growing a 25 per cent year-over-year."

Robbiati told investors on the call that it was "the seventh straight quarter of [storage] growth" for HPE.

Composable infrastructure Synergy "is now a $1bn run rate business since being introduced just two years ago," Neri said. "Our hyperconverged portfolio with SimpliVity and Synergy grew 70 per cent."

That implies Synergy revenues in the quarter were $250m. Neri didn't separate out SimpliVity hyperconverged product revenues or their growth rate.

Robbiati said he expected "storage revenue to ramp targeting $1bn per quarter". There's only $25m to go, 2.65 per cent of the quarter's storage revenues; this should be a straightforward target to hit.

HPE and other storage suppliers

HPE's storage performance compared to other suppliers can be charted. Our consolidated Dell EMC storage numbers only go back a few quarters, but enough to show it's the big cheese with revenues of $3.9bn in its latest quarter, four times that of HPE. 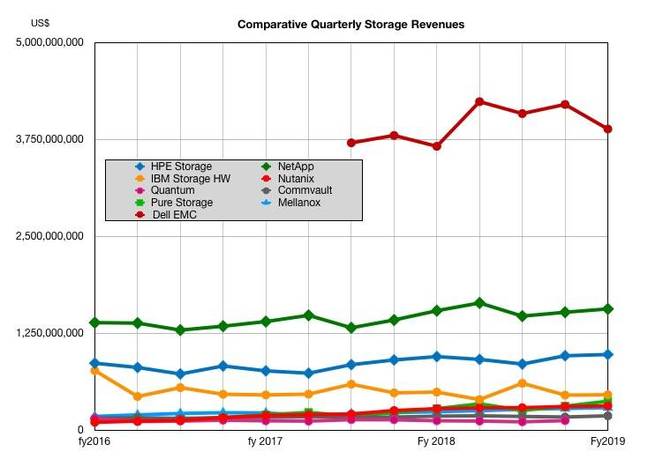 Let's take Dell EMC out and look at the others in more detail: 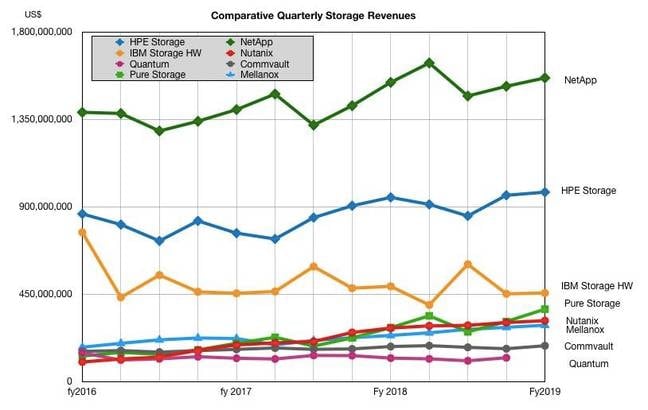 NetApp's latest revenues were $1.56bn, and it's comfortably ahead of HPE. It saw USA demand slow down in the quarter and the 2 per cent growth was less than its high-point guidance. HPE's 2 per cent was as guided and it saw no demand slowdown, especially not in the public sector, which was a NetApp weakness.

We also see HPE is comfortably ahead of IBM, Pure Storage, Nutanix, Mellanox, Commvault and Quantum. The IBM numbers are for storage hardware only and it has a storage software business, the Spectrum-branded products.

Big Blue does not reveal its revenues but we think it would send IBM's curve higher on the chart, possibly even matching HPE's. ®