Eggheads want YOU to name Jupiter's five newly found moons ‒ and yeah, not so fast with Moony McMoonface 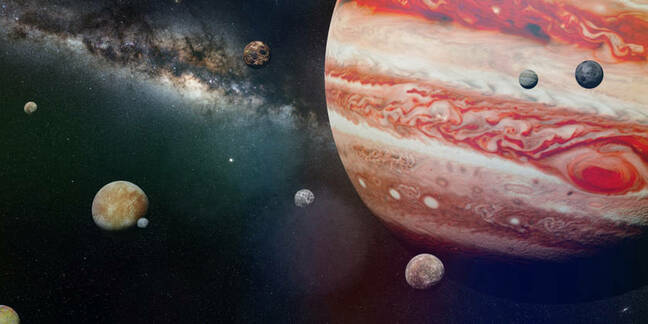 The Carnegie Institution for Science, a research hub headquartered in America's capital, is asking for the public’s help to name five of Jupiter’s newly discovered moons.

A team of astronomers discovered twelve satellites orbiting the gas giant last year. As the most massive planet in the Solar System, Jupiter has the largest gravitational pull so it isn’t too surprising it has some extra cosmic hangers-on. Jupiter has 79 moons, Saturn is second with 62 confirmed satellites, and third is Uranus with 27.

Not all moons need names, however. Out of the twelve new entries, it looks as though the institute believes only five of them deserve titles. If you fancy having a go, be aware there are rules to follow.

Here are the general rules:

If, after reading that, you’re still interested then there are individual rules relating to each of the five moons.

Here are the rules for each individual moon:

Got that? Okay, here’s how you submit your names to the institute, and you’ll need a Twitter account.

“Tweet your suggested moon name to @JupiterLunacy and tell us why you picked it using 280 characters or fewer or a short video. Don't forget to include the hashtag #NameJupitersMoons,” CIS said in an announcement.

So, no, we know what you're probably thinking but Moony McMoonface won't be allowed. Yes, it is 16 characters long, isn't particularly offensive or commercial in nature, and ends in the letter 'e' so it could work for three out of the five moons. But it's not the name of one of Jupiter's or Zeus' lovers or spawn.

If you need some inspiration, a group of researchers have just named Neptune’s smallest moon, a nub of rock measuring only about 20 miles across, Hippocampus. It does sound a lot nicer than is previous name S/2004 N1.

A paper published this week showed that Hippocampus, the seventh inner moon, is probably an ancient fragment of Proteus, a larger irregular-shaped moon. Proteus broke into pieces after it was hit by a comet, a sign that Neptune had a violent past. ®

It may be the oldest and largest planet, but it took a long time

Spacecraft gets mission extension to keep on gazing