Not so smart after all: A techie's tale of toilet noise horror

'The perils of wrist-based motion sensors' 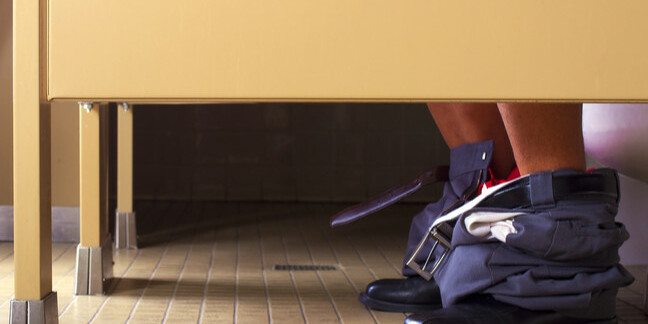 Ah the perils of a connected society were evidenced once again this week when some techies we know took on a pimply faced, smartwatch clad youth as an apprentice.

The lad, it was explained to The Reg, had synced his fitness bauble to his laptop and turned up the volume so all could hear.

The young chap was working on a desk in the outer reaches of the office and every couple of hours the laptop updated all within earshot of the distance he had walked and the calories he'd burned.

Then things took a darker turn. "Unfortunately, our offices are next to one of the toilets, so well within the BlueTooth range. Click. Clunk. Lock sounds. Dink. Lid down. Pause…."

Then horror prevailed as the laptop began to furiously update all within earshot of the distances walked, the er, calories burned – along with the praise, "good job".

The young 'un was apparently, er, exercising in the toilet cubicle but El Reg just isn't sure if he was using his legs or just, um, one arm.

"The problems of wrist mounted motion detectors?" our contact mused. "Could be entirely innocent of course. With the loo roll dispensers here, it can be a bit of a fight to get the end started when a fresh [loo roll] drops down."

A reporter in our newsroom confirmed our worst suspicions when they told us that when they use a hand whisk, their smartwatch believes they are running and behaves accordingly, assuming some displacement of distance had taken place during said motion.

Our techie source freely admits the 100m increments he remembers hearing might be not the exact amount reported by the smartwatch, however he believes his attempts to "pour mind bleach on to erase it all" may have affected his recollection of the numbers.

As always, if you have a tale to tell and want to lighten your load, feel free to relay your stories via the comments section or send them on to one of our intrepid reporters. ®

Are you sitting comfortably? Perhaps not for much longer

BOFH: Oh, go on, let's flush all that legacy tech down the toilet

Episode 6 Leads? Detective Bastard Operator From Hell has nothing to Go On

Clue: Home working might have played a bit part, even in return of the desktop

'I could very well have been bitten in a sensitive place, if you know what I mean'