We'd like to Azure you, mixed reality has a business application

MWC With mixed reality in danger or becoming the cold fusion of technology hypes (i.e. it never arrives), Microsoft has reminded everyone it has built up a significant body of practical know-how at MWC this week.

There's a new headset – HoloLens 2 – which is lighter and more powerful than the first generation, introduced three years ago. But more importantly, partners can license HoloLens and create custom industrial versions of the headwear.

And Microsoft is lending the computation power of its Azure cloud and new developer services to move things along. There's a new Azure Developer Kit, and a bunch of cloud services for the platform. Microsoft's Azure computation will now perform remote rendering for clients.

Developers will be able to create their own app stores alongside the Microsoft App Store "as first class citizens", Microsoft Technical Fellow Alex Kipman enthused.

Healthcare, media, manufacturing, design and architecture lead the pack of industries dabbling with HoloLens, and finding some use in it. For example, examining 3D models collaboratively across distance was allowing engineers to spot problems faster, construction workflow type Trimble testified.

"I'm just so inspired by the energy of our ecosystem," Kipman gushed as somewhere else on Earth a Mixed Reality Angel died.

Ominously, in one example, Kipman explained that aerospace and defence company General Dynamics is using HoloLens for "capturing wisdom" so that it can be passed on to "future generations" of workers – it's not hard to imagine that including cheaper ones offshore somewhere.

You can find more, including specs, here. We note that the thing will be able to run a prototype of Mozilla's Firefox: the Firefox Reality browser. 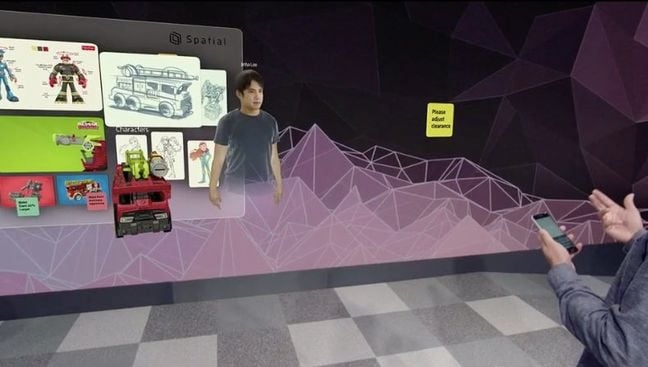 Mixed Reality is taking collaboration to a new level, e.g. sending a sticky note to an avatar

We also saw how users could send digital sticky notes across the ether, Minority Report-esque style. The temptation to create a Mixed Reality Clippy must have been overpowering.

HoloLens 2 Enterprise Edition will be available this year at a price of $3,500 or $125 per user, per month. The lucky UK is one of the markets to get it. The Azure kits can be used right away. ®