A Vodafone exec was plastered on the telco's intranet dressed in a "See You Jimmy"* hat and clasping a bottle of Irn-Bru ahead of a meeting to confirm the redundancy dates for 312 Glasgow call centre staff.

Antonio Shabbir, head of customer care at Vodafone, and one of the figures leading discussions with staff on the fate of their jobs, posed in a tartan cap with synthetic red hair attached to it for a pic shared on the firm's internal social media page by Voda's senior transformation manager, John Lowe, yesterday. 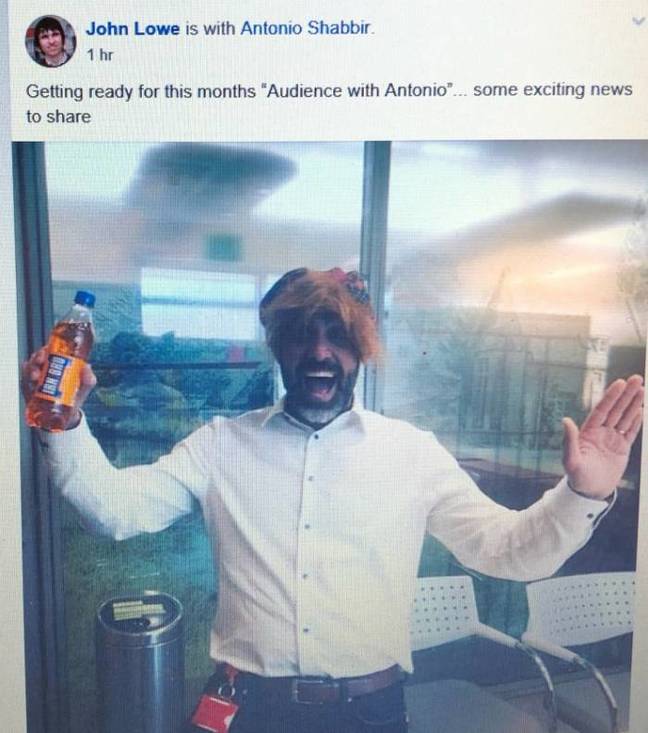 Obviously the post, and the timing of it, sparked outrage among staff that are already smarting from previous mistakes made by the exec.

"The Glasgow team were literally all waiting at their desks to see which of the three redundancy tranches they were going to be placed in. The whole team is getting the bump," a Voda source told The Reg.

"Dozens of staff following the internal Vodafone Facebook page at work stared in disbelief at the insensitive, bizarre and ambiguous message," our source added.

The call centre team was hired to look after consumers of broadband service, but we are told that this operation is being outsourced to Egypt, though Vodafone has yet to comment on this.

Vodafone is in cost-cutting mode, rationalising real estate – years after its buy of Cable & Wireless – and will shutter eight sites including three in Bracknell, one each in both Manchester and Birmingham, along with two stores in Glasgow. 2,700 staff have been asked to move to other locations, though for some this will not be feasible.

Shabbir, who told staff of their redundancies in January when El Reg revealed the company-wide restructuring, also made a gaffe last month – so our insiders say – when he sent out an "all hands" email telling the entire Consumer Care team of salary increases from April. He mistakenly included the at-risk Glasgow workers in this mass mailer.

"He's yet to apologise for that and probably won't," one Glasgow worker said. "Apparently the ongoing HR cases some of the employees have running now has additional fuel [after the incident on Facebook's Workplace intranet product]."

This is not the first time in recent days that Vodafone's social media output has caused consternation among some of the workforce: a newspaper poll that placed Voda as the 29th best place to work in the UK was circulated.

Staff are still awaiting a direct apology from Vodafone for the "See You Jimmy" pic. "We got no apology, no explanation... I've never worked within a communications company that seems so incapable of communicating coherently to its workforce."

Vodafone today sent an apology to staff via The Reg: "It was an internal event. No offence was meant and we apologise unreservedly," a spokesman said.

"Our teams are currently spread out in smaller offices are the UK. We are moving some people into larger centres of excellence across our consumer, digital and technology operations. This will impact 312 employees currently based in our Glasgow office."

This will leave Vodafone with 410 employees in its Berkeley Square office in Glasgow and "more than" 500 at the partner customer service centre in Kilmarnock.

Vodafone made no comment about offshoring but insisted Glasgow will be "one of our main 5G test beds". Scant consolation for staff.

The company has also outsourced cloud delivery to IBM, as previously revealed, though it will sell the services itself. ®

* A stereotypical tartan hat with fake ginger hair attached, so called because of its resemblance to the costume worn by "CU Jimmy", a character created by comedian Russ Abbott.