HMRC: How about a client-led dispute resolution process?

Organisations hiring off-payroll contractors will be responsible for handling disputes over tax status and ultimately liable for missing tax payments once IR35 reforms hit the private sector, HMRC has said.

In its second consultation on the private sector rollout (PDF), published today, HMRC said it wanted to improve communication through the labour supply chain and acknowledged some concerns about the reforms.

Broadly, IR35 reforms shift responsibility for determining tax status from the employee to the employer. Those caught in the net will be taxed as employees rather than through their personal service companies (PSCs).

The taxman first changed the way off-payroll workers' tax statuses are decided in the public sector during April 2017. Now it plans to do the same for the private sector, saying that just 10 per cent of PSCs apply existing legislation correctly, with the cost of non-compliance estimated to reach £1.3bn by 2023-24.

The reforms are controversial – critics have slammed a "mass exodus" of IT bods from the public sector and claim the tool HMRC developed to check a person's employment status (CEST) isn't fit for purpose.

The government responded by pushing back the private sector rollout by a year, to April 2020, and has said it won't include the 1.5 million smallest companies. The consultation also acknowledged that public sector rules need tweaking because private organisations are more varied.

One of the main focuses of the report are long and complex labour supply chains. HMRC has said it will legislate to make it a requirement that a client's decision on employment status is passed on from one body to another down the supply chain.

This means clients will be required to inform workers of their decision directly, and to provide the reasons for the determination on request.

It said that in long and complicated chains, the cascade effect could end up being "very cumbersome", and that there may need to be a "short circuit" that would require the client to tell the fee-payer directly. 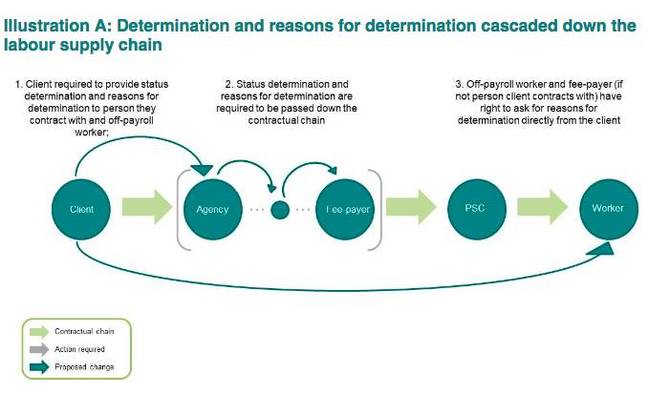 A screengrab of the proposed determination cascade

Under the new proposals, the client – the organisation looking for a worker – will also be ultimately liable for non-compliance, as this will escalate up the chain from the fee-payer in cases where they don't or can't pay.

"We expect that agencies at the top of the supply chain will assure the compliance of other parties, further down the labour supply chain, if they are ultimately liable for the tax loss to HMRC that arises as a result of non-compliance," the taxman said.

The client will also be expected to draw up mechanisms to resolve disputes about the determinations themselves – HMRC has come under fire for the lack of process to challenge a decision, and this is its solution for dealing with this.

This should be based on requirements that will be set out in legislation – the Finance Bill is due to be introduced this summer – but "as a minimum" should include "the consideration of evidence put forward by the off-payroll worker and/or fee-payer, advising the party of the outcome of that consideration and the reasons for that outcome".

HMRC said this "dialogue" would "inevitably" mean the client took "reasonable care" in its decision-making, and that fewer workers would have to rely on end-of-year processes to challenge determinations.

Commenting on the proposals, Seb Maley, CEO of tax insurance provider Qdos Contractor, said: "While the consultation talks of ways contractors can raise concerns about a status decision, independent workers will still be left wondering why more action isn't being taken to make sure engagers are administering IR35 accurately in the first place."

He also noted that the reference to evidence meant that it was crucial contractors kept records and information "that strengthens any case for operating outside the rules".

HMRC also reiterated promises to continue working on the CEST tool – although as The Reg recently reported, the department has been less than open about what testing it has undergone to date, having just one page of documentation to show for more than two years of work.

UK taxman told: IR35 still isn't working in the public sector, and you want to take it private?

Another concern among contractors has been that organisations might make a blanket decision for similar but different roles. HMRC said it was "clear that it is not right to rule all engagements to be within or outside of the rules irrespective of the contractual terms and actual working arrangements".

However, it went on to say that there is "no evidence" this has happened in the public sector – something Maley disputed, saying it was "common knowledge that a number of organisations practised them".

Meanwhile, Dave Chaplin, CEO of Contractor Calculator, warned more broadly that the reforms could encourage companies to hire off-shore workers where there is less threat of tax risk, or choose to relocate outside of the UK entirely.

"The off-payroll rules impose a significant barrier to business growth and a threat to the future prosperity of the UK economy. This legislation effectively raises a sign to entrepreneurs saying 'do not start a company here'."

He said that if the government wants to raise tax from the flexible workforce, it should introduce a "new, simple off-payroll tax, payable by every firm that hires contingent workers, and discontinue their misguided crackdown on their concept of 'disguised employment'."

The consultation closes for responses on 28 May. ®

Britain's wallet-checkers suspect VAT avoidance from some of them – to the tune of 10,000-case tribunal backlog
Legal5 Dec 2022 | 69

HMRC: Contractors, don't worry about IR35 reforms in private sector 'cos it all went so well in public sector

No help for IT contractors on IR35 tax errors

IR35 is the biggest threat to the contractor working model, survey finds