Another quango? Really? 'It's deliberately not that,' says Lord

The world's tech titans have been warned that none are too big nor too international to be regulated on UK soil – though, Blighty's government must stop taking a piecemeal approach and ensure existing laws are effectively enforced.

The latest in a long line of reports into measures for controlling companies in the internet age comes, today, from the House of Lords Committee on Communications.

The 84-page document [PDF] broadly steers away from the hyperbole of earlier assessments, saying that digital policy discussion "seems to be driven by public perceptions of specific harms".

But it emphasised that regulators, parliament and government are all behind the curve when it comes to keeping pace with technological developments, suggesting a body that will monitor developments as well as some specific actions.

That includes measures to address market concentration. "We do not accept that tech giants and what they do is too international, too complicated for an individual country to deal with," committee chairman Lord Stephen Gilbert told The Register.

Competition is one of the most complicated of these areas, but the committee has still recommended changes to rules on market concentration akin to those applied when media firms plan mergers.

The proposal is that when mergers are driven largely by a bid to suck up the data held by a smaller company, they must be subject to a public interest test.

The aim is to stop companies abusing their dominant positions and becoming data monopolies – and they can use their position to more easily spot potential threats to their model and snap them up without competition authorities registering the move. 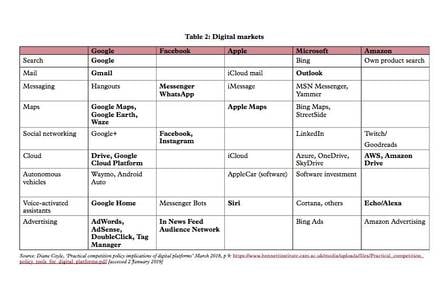 A handy chart to show just how much of a stranglehold each of the five major tech titans has on the digital market, published in the report. Click to enlarge

The report also discussed the problem of lock-in – one witness pointed to the "horror stories about the vendor lock-in that Oracle imposes on people" – and called on the government to recognise the power of intermediaries and ensure that competition standards encourage long-term innovation.

Another immediate action is to back the widespread calls for a so-called duty of care – which have attracted criticism especially from proponents of free speech online. Gilbert said, though, that this should be handled by Ofcom, rather than a new regulator, "otherwise it'll never happen".

Unlike many other reports into internet and tech regulation, the committee did not ask for a new digital regulator. It pointed out that there are already more than a dozen such bodies, creating a fragmented system that allows for gaps and duplication.

Instead, the group mooted a "Digital Authority", a statutory body to sit in the Cabinet Office and oversee all these regulators. It would not only coordinate their work – identifying gaps and overlaps – it would also have the power to instruct their activities.

The Digital Authority would carry out horizon-scanning to spot issues that might need regulatory action in advance, rather than reacting to newspaper headlines.

It would also develop a pool of technical expertise for regulators to draw on – a common lament in the sector is that the regulators don't have the tech know-how, which is both costly and prevents them from being effective.

The committee hopes to dodge the criticism that proposals for a new regulator fail to consider the time and money doing so would cost.

"One of the reasons that setting up a new regulator is expensive is because we never close down another one," said Gilbert. "This isn't that; it's deliberately not that."

He said the cost would be relatively small and that this could be stumped up either from the individual regulators, through cash or in kind, or by the government.

In a sort of quid-pro-quo deal, the Digital Authority would also allow the regulators to wield more power with government. Since it would act as a direct line into both government and parliament, with a proposed quarterly report, they could use it to lobby for extra funds.

"It will be a noisy body," he said. "I would have thought a regulator who feels strongly that there is a gap in resources would use this body to help them make that argument."

Gilbert also argued that the committee's authority would be able to get up to speed quicker than a new regulator – and that it could tackle the duplication that exists in the sector.

"I would hope one of the things [the authority would do] is see where there's overlap and eliminate it," he said, when asked about the proliferation of well-meaning digital advisory bodies, offices and ethics groups spreading like a rash across Whitehall.

"I'd say to government, stop creating lots of little bodies, create an overarching framework, have a good look at the existing bodies and work out whether they're the right ones for the future."