They all fell over, fears of massive DDoS denied

On Wednesday morning, around 0800 Pacific Time (1500 UTC), Google said it was "investigating reports of an issue with Gmail" in which some users were seeing error messages, and the webmail platform was running very slowly. Netizens were, at the time, already loudly protesting about the knackered service on social media.

At 0945 PT, Google acknowledged the Drive outage, and admitted Gmail was still experiencing problems, especially with attaching or accessing files. By 1100 PT, however, the Chocolate Factory claimed the hiccups were resolved; your mileage may vary.

"We apologize for the inconvenience and thank you for your patience and continued support. Please rest assured that system reliability is a top priority at Google, and we are making continuous improvements to make our systems better," the web ads giant said in a statement.

Soon after, folks started reporting that Facebook was also taking the day off, leaving people unable to access it, suggesting all was not well at Menlo Park. The antisocial network's other properties, such as Messenger, WhatsApp, Oculus, and Instagram, were also suffering outages, according to netizens. 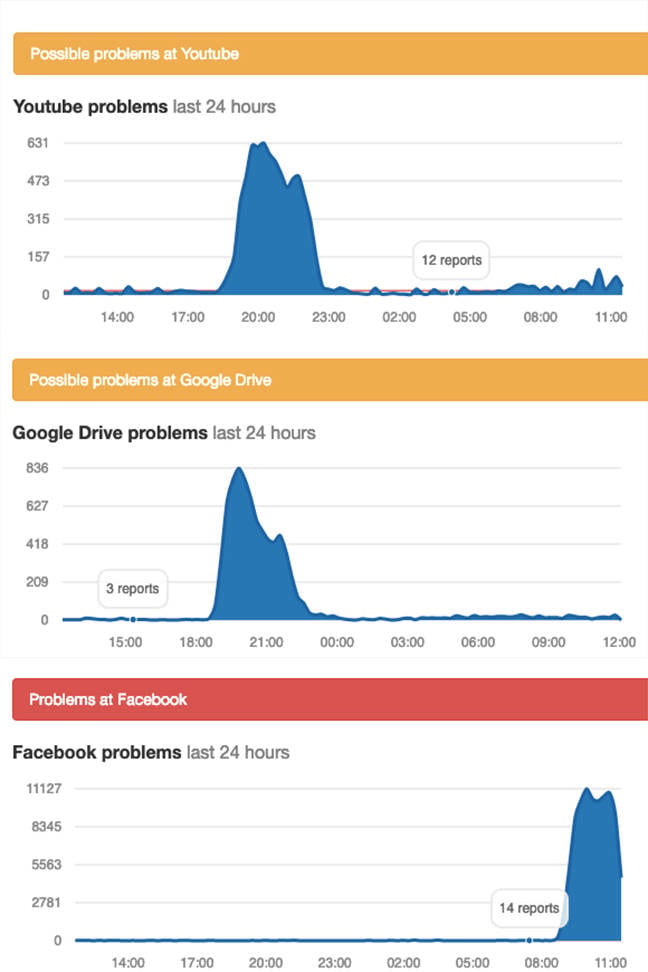 One comes up, the other goes down ... Downdetector's reports of complaints from Google and Facebook services

"Account Temporarily Unavailable," was a message that some Facebook users from across the globe discovered on checking their pages. "Your account is currently unavailable due to a site issue. We expect this to be resolved shortly. Please try again in a few minutes."

Facebook confirmed its systems were unwell and falling offline for unlucky folks around the world. "We're aware that some people are currently having trouble accessing the Facebook family of apps. We're working to resolve the issue as soon as possible," it said.

Then, at noon here in California, a Facebook spokesman denied one possible explanation: that the Silicon Valley giant, and Google before it, were being subject to a massive denial-of-service attack.

We're focused on working to resolve the issue as soon as possible, but can confirm that the issue is not related to a DDoS attack.

We'll update this story as more details emerge. As far as we're aware, Google is back to normal by now, and Facebook is still working to right its servers and connectivity. ®

It was speculated earlier by network management biz Netscout that a BGP leak caused today outages, a claim made by its PR team and now withdrawn as there was no evidence to actually support it.

When investigating Facebook’s issues today, we’re not seeing any BGP changes that are affecting connectivity, packet loss or latency. Since Facebook uses its own backbone network, it’s not clear as to how an external transit route issue would cause a disruption within the internal Facebook network.

If a route leak were affecting user access from the internet to the Facebook edge, then it would most likely manifest as paths changing, such as what happened when user access to Google [in November last year] was impacted by a route leak. Our global vantage points were able to capture the path changes in that case, but we’re not seeing any evidence so far of that happening today.

Meanwhile, Facebook and its services are still down, hours later, for some unlucky netizens.

Some 14 hours after falling over, Facebook's platforms are back online, with virtually no explanation.