How many Reg columnists does it take to turn off a lightbulb?

Something for the Weekend, Sir? I became old this week.

My birthday is still eight months away but time waits for no homo sapiens bearing the DNA stamp of either/both X and/or Y-chromosomed gender fascism. (Sorry about the second half of that last sentence but I have learnt to be careful when reciting old proverbs that can be interpreted as bearing subliminal agenda payloads. If you were affected by the issues raised, etc.)

The first hint of accelerated decrepitude, as Pris famously put it, was laid bare when the invitation arrived: "Come and join us for a celebratory dinner to mark 30 years of CorelDraw!"

Another anniversary, damn. Recent times have witnessed plenty of such digital graphic arts milestones, such as the PDF file format passing its quarter-century mark last year and Photoshop set to turn 30 next year. If you're interested in such things, Adobe InDesign will be 20 years old this August, and both Illustrator and QuarkXPress are already 32.

Now here's CorelDraw holding a birthday party to launch its new 2019 release, and to celebrate turning 30 while still living with its parents. And for me, Corel conjures conflicting memories of its fortunes and flounders, perfectly mirroring the wayward history of packaged consumer software development through the Nineties. From its fast and furious early versions, it embarked on a relentless acquisition drive, swallowing utility programs, ultra-crappo fonts and cheesy clip art with the appetite of Val Kilmer in an all-you-can-eat doughnut store, rapidly swelling into the very epitome of bloatware.

And does anyone remember Corel's attempt to develop an Office suite entirely in Java? Interesting project though it was, it was let down somewhat by being slower at text entry than making punched cards with a nail gun.

If this all seems a long time ago, I should remind you that one of the finest sci-fi movies – Aliens – came out 33 years ago in 1986. The chances are that most Reg readers have seen this film, quite probably several times. Now, bear with me, do you remember the following scene?

Ah, the industrial exoskeleton: a mainstay of hard sci-fi and futuristic manga. I bring it up because a company called Sarcos Robotics is making them right now. 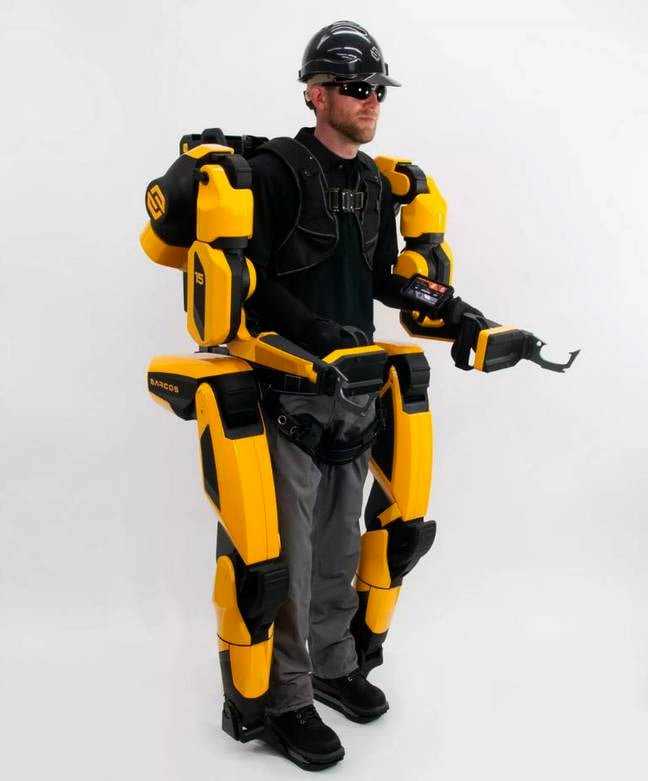 Surely one of the most powerful examples of getting old is when something you remember as pure sci-fi becomes reality. Don't give me crap about Star Trek communicators and mobile phones, because they are definitely not comparable. Captain Kirk can chat to his crew on the Enterprise from the surface of a planet; I'm lucky if I can get adequate reception to make a local call without having to lean from the upstairs toilet window.

My first signs of ageing manifested themselves upon arrival at the hotel just before the CorelDraw Graphics Suite 2019 launch presentation. Up until then, I had navigated two sets of airport security thanks to my mastery of biometric passport readers, leaving my fellow middle-aged passengers befuddled in my wake, and had negotiated my taxi arrangements via mobile as I strode across the baggage hall and through the customs exit towards a waiting car.

At the hotel reception desk, it all went to pot. Passport, check. Amex card, check. Card PIN? Ah, it's a new card with a new PIN. No worries, I keep these stored away safely in KeePass. Except… KeePass kept insisting I was entering the wrong credentials and refused to access the encrypted data store.

It's one thing to forget one PIN among a dozen; it's another to forget the password to your own password manager; and it stretches all comprehension when this same password manager insists that your finger has forgotten its own fingerprint. Now that's what I call ageing: even my fingerprints have crow's feet.

I tried all the usual things such as blowing imaginary dust from the fingerprint reader, pressing harder, pressing more softly, and shouting just fucking let me the fuck in you fucking fucked fuck-headed fucker.

This forced me to present the hotel receptionist with my alternative credit cards in order of decreasing prestige – British Airways, Waitrose, Marks & Spencer, Wilko, Poundland – but I couldn't recall their PINs from wet memory either. The receptionist was positively smirking as the sample payment of €0.01 finally went through from my Greggs Mastercard, and KeePass duly chose that moment to spontaneously sign the fuck in.

Things got worse when I retired to my hotel room after dinner. Shower, brush teeth, head to pillow, switch out the lights. It was the last of these that foxed me.

You will be aware that even the tiniest of hotel rooms have multiple light switches on various wall surfaces for the same lamps but in different groupings. In my case, I found that switching some lights off had the effect of toggling others back on again. After spending a minute flicking the switches up and down in alternate configurations but without succeeding in extinguishing all the lamps at the same time, I got out of bed to try the other banks of switches.

Half an hour later, I was still wandering around the room flicking switches up and down in combinations of ever-increasing complexity. Time and again, I'd reach a point where just one bulb was still illuminated… only for the final flick to turn every single one back on again, even including the circular shaving mirror backlight in the shower room, all together filling the room with a blaze of brightness to match the noonday sun.

I finally managed to kill the lot at around 1:00am. Exhausted, I slumped back to enjoy a few minutes staring up at the pitch darkness.

I turned over and a light came on.

There was a motion detector inside the wardrobe to illuminate a light inside when you rummage around looking for your socks. And since there was a gap between the wardrobe doors, the motion detector at the back was pointing straight through and directly at me in bed. It was time-switched to turn off after a minute but every twist, cough and arse-scratch triggered the light back on again.

Keeping perfectly still makes for a long night. It's no wonder that I couldn't work out how to reset my Casio G-Shock back to UK time during the flight home. Well, that and suddenly becoming old, I suppose. Nothing that can't be fixed by leaving the watch by a north-facing window overnight to resync to the time signal, but still.

Luckily, things will be different for oldsters of my generation. No mobility scooters for us. Instead, I'll be getting Ripley's power loader. And when I get hold of whoever wired up my hotel room lights, this is what I'm going to do wit' dem bitches:

Alistair Dabbs is a freelance technology tart, juggling tech journalism, training and digital publishing. It would appear that one week he's complaining about running out of batteries, the next he's whingeing about not being able to turn things off. Kill the power! @alidabbs
Corrections Send us news
176 Comments