Time to revisit the idea of patent portfolio as nuclear deterrence? 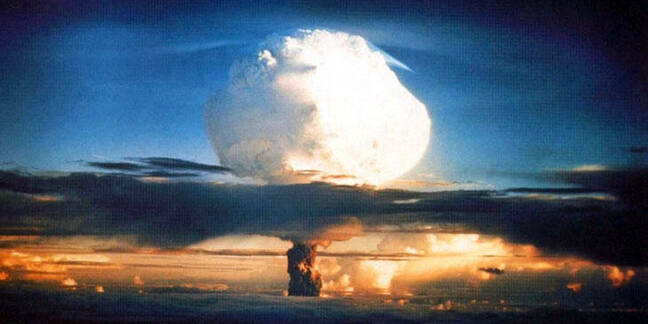 Analysis Qualcomm has won a $31m judgment against Apple in the US after the iGiant infringed three of Qualy's mobile phone battery patents – the latest ruling in a long series of intellectual property spats between the two companies.

After an eight-day trial, a jury in San Diego, California, decided the iPhone slinger had made use of the chip designer's technology without paying for it and so decided in its favor. The fine is almost inconsequential for Apple, which has annual revenue of over $200 billion.

But, critically, the fine was calculated on a per-iPhone basis: something that could have significant implications in other ongoing patent lawsuits between the two.

Although Qualcomm can claim victory this time, it is a battle in a much larger war that may end costing both companies more than they win. Last month, Qualcomm lost in the German courts when four of its eight patent lawsuits against Apple were dismissed. And last week, Qualcomm was ordered to pay Apple $1bn in royalty rebate payments, although it may not actually have to write the check because of the myriad of other patent disputes it has with the company.

Then there is a recent FTC court case against Qualcomm in which the federal government argued that the chipmaker was abusing its market position to charge unreasonable patent fees on its mobile technology.

Apple was a key driver and witness in that case, although the trial brought out some eyebrow-raising testimony that demonstrated both companies were equally amoral. At one point, Apple agreed to actively undermine Intel's competing WiMAX technology to Qualcomm's in order to get a lower royalty rate.

Calm before the storm

The Apple-Qualcomm agreement stood for five years and saw Apple exclusively use Qualcomm chips in its iPhones – and it is the root cause of the global patent battle both are waging against one another.

The agreement included numerous compromises that gave both sides what they wanted – often at the expense of competitors – and from Qualcomm's perspective was designed to tie Apple into their products.

So when Apple took the decision to walk away from the contract when it ended in 2016 and buys chips from competitor Intel instead, it knew that the chipmaker would respond aggressively.

It did. Alongside numerous patent infringement lawsuits, Qualcomm has also fought for – and occasionally won – injunctions against Apple preventing it from importing or selling iPhones under the argument that they continue to infringe its patents.

The feud kicked into high gear in January 2017 when Apple sued Qualcomm claiming that it was charging "excessive patent royalty fees" for its cellphone technology. It asked for a billion dollars in compensation.

Apple said Qualcomm was charging five times the going rate for patent licenses and that the company had withheld payments to Apple in retaliation for Apple cooperating with the Korean authorities in a probe that eventually led to Qualcomm being hit with an $853m fine. It has been all-out warfare since.

Apple sued Qualcomm in China for $145m. And then sued again in the US in an effort to invalidate its patents. In response, Qualcomm sued to get an iPhone import ban in America. But before things really got out of hand, Qualcomm's CEO offered Apple an olive branch. Which Apple snapped over its knee.

Apple started backing electronics factories that were being sued by Qualcomm for not paying their royalties, in an effort to put the squeeze on the chip designer. Qualy's CEO stood his ground, telling analysts: "We believe we have the high ground on Apple."

And then Qualcomm formally complained to the US government's International Trade Commission (ITC) about Apple, and it opened an investigation into whether iPhones should be banned from import into America over patent infringement.

In short, it is an enormous global mess with two huge companies battling against one another and both sides refusing to back down. Apple believes it has the upper hand because it can afford to outlast and out-sue Qualcomm thanks to its vast revenues and stashed cash.

Qualcomm is on shakier financial ground – as indicated by the fact its share price went up two per cent when the $31m judgment in its favor was announcement – but it believes that ultimately Apple will be found to have infringed its patents.

The fact that the most recent judgment was calculated using a per-iPhone royalty rate of $1.41 means that if it does ultimately succeed in its patent infringement suits with Apple that it could receive an enormous settlement, with ongoing royalty fees.

In other words, if Qualcomm can hang on long enough and prevail, not only would it win, not only would it receive a huge influx of cash but Apple would have to keep paying it for every iPhone it sold. It's not clear if Apple believes it can win or if its strategy is to hurt Qualcomm so much that the company is forced into signing a favorable settlement with it.

Two things are clear however: one, there was a strong seam of logic in the previous status quo where large tech companies built up a patent portfolio in order to act a nuclear deterrent against others – don't sue me and I won't sue you. And second, the only people benefiting from this whole sorry legal campaign are, of course, the lawyers. ®