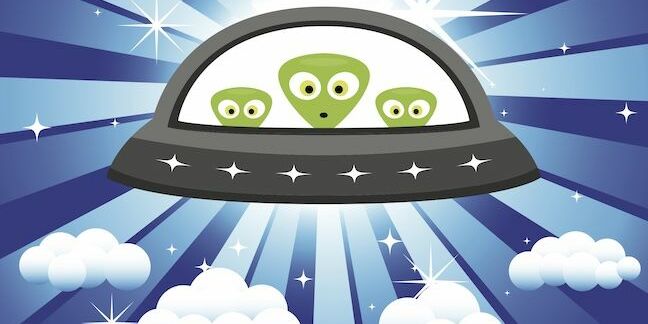 Comment Executive editor Andrew Orlowski was invited to share his thoughts on challenges to the uptake of 5G at a Westminster Forum event on Thursday 14 March. This is what he told the panel.

Sometimes one can get so immersed in a subject we lose our sense of context and we overlook what's obvious. As a reality check, I sometimes find one particular thought experiment to be useful. I'm going to do this with 5G.

Which is: "How does it look from space?"

Imagine that a friendly and curious civilisation of Little Green Men and Women – who may or may not be little – had crossed deep space to eavesdrop on the state of human technology. What would they make of our current preoccupations? Let's take three: AI, blockchain and 5G.

For a start I think they'd find the AI obsession a bit odd.

They'd be curious about the faith policy-makers put in probabilistic, statistical methods, and surely be aware of the pitfalls of doing so. These tend to make a machine more expensive and less reliable – not the best basis for an industrial revolution. I suspect they would be baffled by the idea that a probabilistic approach was itself a clever one. In an analogy Noam Chomsky likes to use, today's AI is akin to scrapping the physics department and trusting data analysis to produce the weather forecasts. On some days you might get a better forecast, but you're jettisoning an understanding of the underlying mechanics of weather systems. You're throwing out physics.

The excitement over blockchain would strike them as even stranger, I suspect. "We thought you'd invented databases 50 years ago, when we last visited!" they might say. "You seem to have made them slower." Also, "Why is the problem of co-ordinating two untrusted actors such an important one? You seem to manage to do that in the art auction market, where buyers and sellers can be anonymous." Cue baffled little green faces.

But compared to these two tech preoccupations, I think 5G emerges quite well.

"Ah," say the aliens, "what we see here is the world's best boffins, the best engineers and maths people you have, and they're being thrown at solving real problems. This is good. And we see enormous capital being invested to bring these to people very quickly. This is even better."

Compared to blockchain, or the "Fourth Industrial Revolution", this is reality-based. And it works – I'm thrilled when I read that an emerging economy, Mauritius, sees dramatic annual improvements in download speeds, leapfrogging others.

But we're here to talk about the short-term prospects and 5G is not going to excite consumers like it excites us. The consumer view is different. The consumer is not interested in the things that excite me, like beamforming and mmWave and network slicing, and all the new opportunities for new models and markets.

Speed isn't actually the solution. Awkwardly, people take speed for granted, so they may be sold 5G as the bug that fixes the bug of slow 4G. LTE in London on at least two networks is unacceptable – often unrecognisable as 4G.

At the coffee break a few panellists were musing on the irony of discussing 5G here in Whitehall, at the heart of government, where even 3G isn't accessible. And where the Wi-Fi induces terrifying security warnings.

The MVNO was conceived of 25 years ago and filled mobile operators with horror. This has to be seen as a gradual decade-long transformation, not a race. Touting leadership in a race that's five minutes old isn't smart. "Faster" isn't going to be sufficient.

Dear Britain's mast-fearing Nimbys: Do you want your phone to work or not?

I have a modest suggestion. We've heard lots today about regulatory challenges to deploying 5G: ducts and poles and spectrum. But as much of an issue is the consumer perception of mobile networks – somewhere between a utility and a bank. They're rather grudgingly used. I'm not saying this is an entirely fair perception, but it is a real perception. Utilities don't care about much more than reducing churn. MNOs often play down to the worst expectations of what a utility should do.

This can change, and I think 5G will oblige networks to change. They'll have to. For networks to win, they have to think like true full services companies, like a concierge service, rather than utilities. I'll give you an example.

I can't find a data-less SIM card anywhere. For parents of kids between seven and 11 that's a staggering omission. You need to buy them an antique phone. And kids who use an antique phone tend to get beaten up more than kids who use modern phones. I'm also fascinated and encouraged by Vodafone's V-Kids consumer IoT range – because they're new and useful and a clue on how consumers can capture some of the value.

So Vodafone has an app. It's a nice app. But I can't manage my kids' PAYG SIMs from the app. It can't do PAYG. I can't add services like the V-Kids watch using 1-click Amazon or Apple checkout. Or easily see what they're up to. We don't even do family plans here – let alone manage them.

All of that matters more to me than speed.

Finally everyone in the room is going to have challenges about fulfilling the promise of 5G if Nimby**-ism expands. This is as much an urban issue as well a rural issue. Affluent liberal areas – the ones that get the wobbles about vaccinations – are also getting the wobbles about mobile phone masts. Trust me, I live in North London.

In short, I'm excited about 5G, but there are real challenges for consumers to realise the benefits of 5G. ®

** Not in my back yarders