We fought through the crowds to try Oculus's new VR goggles so you don't have to bother (and frankly, you shouldn't)

Rift S adds some technology... but not enough

Hands-On It's the annual Games Developer Conference (GDC) in San Francisco, where the great and the good from the games industry converge to show off their new products.

And we have arrived with basically the same question as last year: are virtual reality headsets ready yet? The big news this year is a new high-end headset from Facebook: the Oculus Rift S.

The original Oculus Rift almost single-handedly kicked off the revival in virtual reality when its pre-production models started appearing in 2013. It stirred so much excitement that Facebook paid a then-massive $2bn to acquire the company as part of its world domination plans, without Oculus having put out a full-blown product and tested the market.

But while the Rift was a jump forward, and sparked a number of other companies to get serious about VR, the truth is that it remains only for enthusiasts. It is clunky, and heavy, and expensive. It has to be connected to a powerful PC – with a wire. And it feels like you are wearing a computer screen very close to your face. It's fun. But also tiring. Few outside hardcore gamers are that excited to try it again. At least not until it's better.

So is the new Oculus - the first refresh of its high-end headset – better?

Yes, it is. Critically it has "inside-out" tracking which means that if you want to move around when playing you don't have to also buy and install and configure real sensors in your room: they are now built into the headset. This is great news for widespread adoption: very few people either have the space or want the hassle of setting up a dedicated gaming space.

The S is also more comfortable. It is slightly heavier but comes with an over-the-head strap and rigid behind-the-neck strap that you can tighten and so put less weight on your face. This is also a step up.

Critically it has slightly better resolution, which means it feels a little less like you have a phone pushed right up to your face. That is the one thing that non-gamers really dislike.

The new headset allows you to look through it to the real room (sort of, it does it by showing you what cameras on the front of the headset are capturing). And it includes speakers inside the headband, rather than earphones than hang down, which is… different. Less clunky but also a little less immersive. 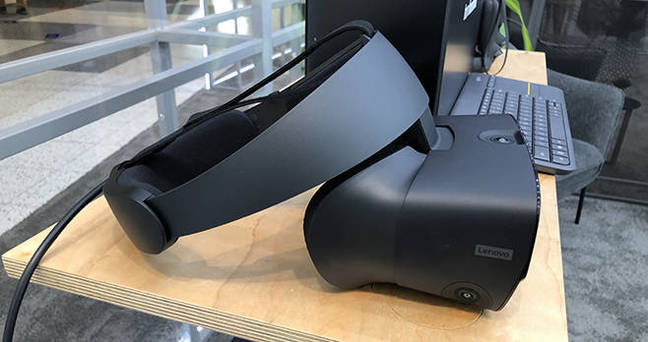 The new Rift-S. Thanks to Lenovo, it is slightly better.

So, all in all, a series of improvements. And we got to play with the new Oculus S (after a tediously long wait) and can now exclusively report that…it needs more work.

For the third year in a row, it’s still not enough. It's still not there. And everyone knows it. But, like every other year, few want to admit it.

The truth is that Facebook/Oculus is desperately trying to find a sweet spot where its headset is good enough to get more people buying and using it, so that more companies investing in producing games for it, so that more people get excited about spending money on a new bit of gaming kit so they can play those games.

That's the magic virtuous circle. And in theory it would allow Facebook to grab a large part of the future VR market before others – like Apple – come in and steal it from under them.

But getting there has meant tight deadlines and tough compromises. The Oculus S is a compromise headset in every way. It's better than the original Rift but not that much better. And in some areas it even has downgraded performance – it has a slower refresh rate, which makes it slightly jumpier – in order to keep the same PC specs.

But, as compromises often are in the consumer world, it's not enough. This still isn't the product that will become the Xmas super seller. Why? Because it's still too heavy. Not one wants to stick a bag of sugar on their head, no matter how ergonomically designed.

And the truth is that when you are stuck in a virtual world, the extra weight on your head just feels destabilizing. Especially if you want to physically move around.

It still feels too much like a phone screen inches from your eyeballs. The resolution is better – but not enough (VR nerds will talk a lot about OLED screens and LCD screens and AMOLED screens but all it amounts to is: the screens aren't good enough yet.)

And you still need an expensive PC to make it work. And you still have to be permanently attached to a cable. And the field-of-view (how much of the virtual world you can see out the corners of your eyes) is OK but it's still too small.

And then there's the stuff that isn't in the headset. One of the most exciting things going on in the VR world that lets you overlook much of the other downfalls of the technology – in much the same way that it doesn't matter that a fun game like Tetris has basic graphics – is eye-tracking.

Eye-tracking does what it says it does – it tracks your eyes and so knows where you are looking within the virtual game. And this makes the whole thing feel much more real and far less like your computer has been squeezed onto your head. The Oculus Rift S doesn't have eye-tracking.

The whole line is also starting to suffer from productitis. It has new, improved controllers but the old controllers won't work with the new system. The new and old product lines are clashing. Oculus also has a lower-spec wireless Oculus Quest for the same price ($400) but while the new controllers will work with it, it's not clear whether the same games will be available.

It's not just this reviewer that feels this way either. The VR specialist press is feeling very meh about the whole thing. And Oculus' founder – the odd and alt-right-troll supporting Palmer Luckey – was so annoyed about the fact that Oculus is settling for compromises rather than leaping for the stars that he wrote a whole rant/blog post about it.

His feeling was that Facebook had decided that the solution to widespread adoption was a lower price, rather than a better-performing headset. The $400 Rift S may well prove him right when it launches this spring.

And then there was the speculation that Oculus Board member Brendan Iribe jumped ship lat year largely because he was uninspired with Facebook's steady-as-she-goes approach and its decision to scrap a new-generation Rift in favor of a slightly updated version – which we now have.

The Rift S is fine. We still felt a bit sick playing it. It still has that initial ability to transport you to a different world but, as before, you find that that world is a little unpleasant. Disneyworld with a hangover. A shopping mall when you have a cold. A stroll in a beautiful city, jetlagged.

Here's the thing: there is supposed to be a Rift 2 blowing everyone's minds right now. God knows the VR industry needs it after years of clinging to the hype and wild dreams without the actual success. But, you know, they got the Oculus S.

There are other headsets coming. The new Vive Pro from HTC with built-in eye-tracking could be good. The HP Reverb promises more. Perhaps that will be the one. Maybe PlayStation or Google will pull something out the bag. Maybe Apple will come good. (Magic Leap? Ha, just kidding.)

Or maybe we'll have to wait until next year. Again. ®