Top UK pop-pickers CCS Insight have predicted that smartphone demand will decline 3 per cent this year, the latest in a flurry of gloomy forecasts.

CCS revised its earlier forecast down: it reckons 1.8 billion smartphones will shift in 2019 rather than 2 billion, as it thought earlier. Marina Koytcheva, VP of forecasting, cited longer upgrade cycles and high flagship prices. The analysis outfit also prognosticated that China could see a 9 per cent decline in unit shipments.

The stick-with-what-you've-got trend was first noticed in Europe but has now spread to the United States, Koytcheva said. Sales in Western Europe have declined 23 per cent in the five years to 2018, with consumer research showing people hold on to their phones for longer.

Koytcheva blamed smartphone makers for "getting carried away" with their pricing.

"The psychological threshold of $1,000 seems to have prompted some consumers to re-evaluate whether they really need to replace their phone as quickly as they have done in the past," she said, adding that demand may perk up next year with 5G. 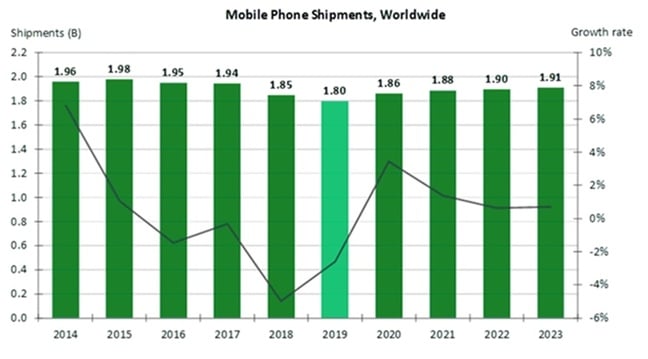 On Monday Samsung issued its second profit warning of 2019. The chaebol manufactures DRAM memory chips, displays and other components for a range of electronic goods including PCs, so it's a decent bellwether. Another memory chip-maker, Micron, has also pointed to an inventory glut. In January, Samsung warned that revenue would be down 11 per cent year-on-year. Both Micron and Samsung are confident demand will pick up after the inventory glut has cleared in the second half of 2019.

Gartner's numbers are slightly different, but it also sees the big two smartphone makers hardest hit in the current market.