IBM has replaced its entry-level Storwize arrays with faster boxes and introduced an NVMe-oF accelerated mid-range.

The V5010E has four times more cache than the V5010, and twice its maximum (but unspecified) IOPS, and scales to 12PB maximum flash capacity, courtesy of new 30TB flash drives.

The V5010E is 30 per cent cheaper than the V5010 and can be upgraded to the V5030E. IBM said it's a good fit for edge storage, virtual and containerised environments. 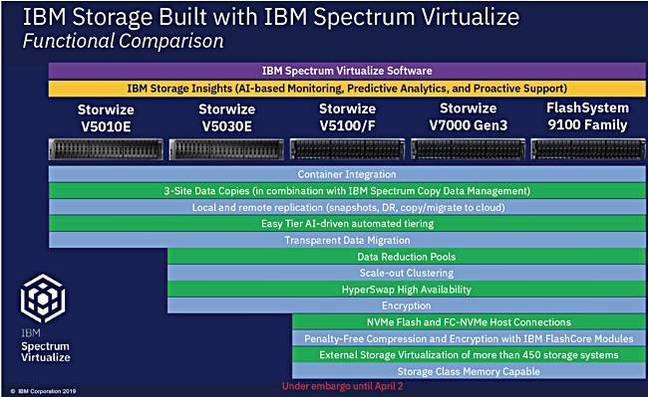 The V5030E has data reduction features; both compression and deduplication. It can use 30TB flash drives, and scales to 23PB of all-flash storage in a single system; 32PB with two-way clustering. It has, IBM said, a 30 per cent lower street price than the replaced V5030 and 20 per cent higher maximum IOPS.

The V5100s have accelerated NVMe drive and NVM-oF performance. They can have 2PB of flash in a 2U chassis, and they scale out like the V5030F, with 23PB of all-flash storage in a single system or 32PB with two-way clustering. They also have nine times more cache than the V5030, and pump out 2.4x more IOPS than the V5030F (with data reduction, costing 10 per cent more.

IBM said the V5100s are ready for storage-class memory and 32Gbit/s Fibre Channel. Like the V7000, they support end-to-end NVMe.

Spectrum Virtualize, the management and virtualization software used in the Storwize and FlashSystem arrays, is now available on AWS.

IBM is supporting the Container Standard Interface (CSI) to speed storage provisioning for its storage, and plans to add a container-native software-defined storage capability for Spectrum Virtualize (block) and Spectrum Scale (file.)