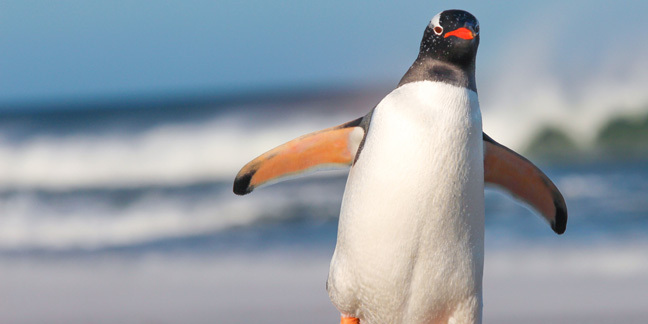 There was good news this week for the Venn region of Windows 10 users who also enjoy a bit of Linux bothering on the desktop, as Pengwin 1.2 popped up on the Microsoft Store.

The Debian-based distribution tuned for the Windows Subsystem for Linux (WSL) was formerly known as WLinux before a visit from the rebranding elf saw it named "Pengwin". Because of penguins. And Windows. Geddit?

The makers, Whitewater Foundry, are justifiably proud of their baby and have shovelled in a wide variety of handy developer toys for the WSL user as well updating the wslutilities suite to make life easier when it comes to hopping between the Windows and Linux worlds.

The changelog for Pengwin 1.2 is impressive, bundling in tools for developing Linux C/C++ apps using CLion and Visual Studio. Add-ons for IBM Cloud, OpenStack, AWS and Terraform have also made an appearance.

And, of course, the thing has still retained preconfigured settings to run up Linux graphical applications with a suitable X server (or similar). In our case, we used X410 from the Microsoft Store.

Having installed Pengwin, set-up is kicked off via the command line pengwin-setup application, which brought up a delightfully retro text-based installer (WSL is, at its heart, a command line interface after all) with a near bewildering array of options.

And there, in a nutshell, is one of the issues with Pengwin. If, like me, you simply check every box because – hey, got tons of space, what could go wrong? – things may not go well for you, and the install could take several hours before you realise just how unwell they’ve gone.

So - top tip (for an amatuer:ed) - consider what you need from Pengwin before blithely selecting everything.

The second time round, after considering what was actually needed from the variety of tools, things were considerably smoother and, once again the surreal delight of firing up a graphical Linux app from WSL could be enjoyed. In this case, Visual Studio Code.

As before, the distribution has been tuned specifically for WSL rather than a simple clone of a vanilla distro.

Aside from the plethora of tools, Pengwin has joined the ranks of more mainstream distros by dispensing with the need to upgrade in the future via GitHub and scripts. apt is now the way forward. The gang has also refactored its own scripts and addons into modular components that we're assured will make things easier to maintain and accelerate the arrival of new features.

Microsoft, it seems, is quite the fan of the start-up, and has invited the team to present at its upcoming Build conference.

How times have changed in Redmond.

So much so that serial soda borrower and presenter of the Visual Studio 2019 keynote, Scott Hanselman, declared his love for the distribution while ponying up the cash to pay for it.

Pengwin, of course, is not free. However, if WSL is your thing, it can be yours for less than the cost of a couple of London beers. ®