A piece of UK computing history is going on the auction block this month in the form of a plug-in package for a Ferranti Pegasus Computer.

Readers of a certain age will remember the joy of feeding and retrieving punched paper tape from the looming bulk of machines like the Pegasus, while others may recall seeing one of the beasts occasionally fired up at London's Science Museum until a fault in 2009 shut it down permanently.

The vendor, a chap apparently into his vintage hardware, is hoping to score some substantial cash for the item. The auction has an opening price of £1,800, with an estimate between £3,000 to £5,000.

Working Apple-1 retro fossil auctioned off to mystery bidder for $375,000

That may seem high, but let's face it, someone was willing to stump up $350,000 for one of Jobs' finest. Although Apple fans are known first and foremost for their deep pockets.

The Register had a chat with the Computer Conservation Society (CCS), which described the price as "ludicrous" and suggested a value in the region of £25-£75 since the items are actually quite common, likely found changing hands at electronics and radio jumble sales. One person at The National Museum of Computing (TNMoC) owns a dozen of the boards.

So, either a goldmine, or a collection of parts unlikely to ever trouble the power supply of a Pegasus again.

We also note that TNMoC is holding its first "ElectroJumble" on 21 April, where all manner of gear can be picked up, including "vintage components". Spank a tenner on what could be a lottery-winning bit of board or, more likely, an interesting souvenir, and you get entry to the museum itself.

Matt Nunn, MD of Flints Auctions, who is charged with auctioning the piece, told us that the reserve was set by the vendor, although the guide price was driven by the market and general interest in the field. Nunn cited the example of boards from an Atlas computer, which sold for £390 back in 2017.

Rather than the transistors of the Atlas, the Pegasus board features valves, which makes things a bit more intriguing. Hence the hoped-for jump in price.

Nunn also pointed out that Flints had been unable to find any examples coming up in auction in the last 15 years.

What was the Ferranti Pegasus?

The Pegasus contained hundreds of plug-in electronic modules featuring two or three vacuum tubes, predating the transistors and microprocessors used in more modern devices. While some of the boards were used for storage, much of the up to 7,936-word memory of the machine was held on a magnetic drum, spinning at 3,750rpm.

The board up for auction is an example of the neat design of the Pegasus. By keeping things modular, maintenance was considerably simplified thanks to the "plug-and-play" packages.

Built from 1956 at Ferranti's factory in Manchester, the machine is described as the first "user-friendly" computer, despite lacking the fripperies of modern life such as, er, a keyboard. The logic design of the thing was what impressed users and 38 were sold, finding homes in banks and universities.

At the end of its selling period, in 1962, you could pick one up (if you had a room big enough and a floor strong enough) for £47,000, or around a million pounds in today's money.

One was, until recently, on display at London's Science Museum. Computer number 25 is celebrating its 60th birthday this year, and was still running in 2009. Volunteers from the CCS kept it ticking over, demonstrating the machine to museum visitors until elderly wiring within the Pegasus shorted out, causing a small fire.

Nervous museum bosses decreed that the machine should not see power again and, while repaired, the Pegasus remained dormant. In 2015 the Science Museum closed its computing gallery and moved the hardware into storage.

A representative for the Science Museum told The Register: "Given the age and fragility of the electronics within the machine, we do not plan to operate the computer in the future." As for the auction, the spokesperson said: "We have no plans to acquire the item."

While we are unlikely to see a Pegasus running again in the foreseeable future, Christopher Burton of the CCS put together a simulation (PDF) to give enthusiasts a feel of operating the machine. Naturally, we downloaded a copy and, having fired up DOSBox because it won't play nicely with 64-bit Windows 10, we spent a happy hour flicking switches on a virtual control panel. 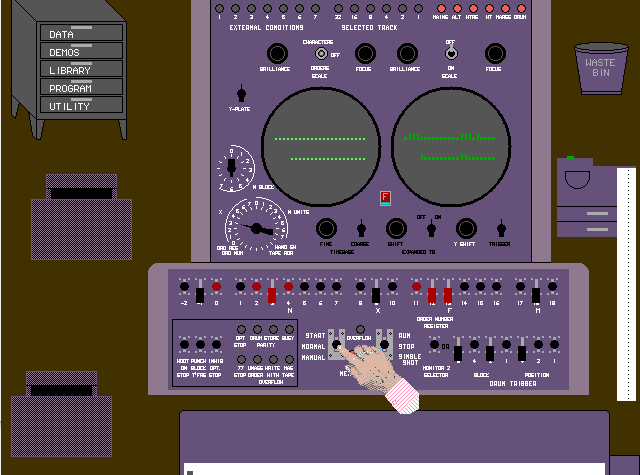 The Pegasus Simulator in action

Those were the days.

Thanks to Reg reader Stephen Walters for the tip. ®