Hey kids – fancy chucking paper planes at the supply teacher while your real one hops on a micro-gravity aircraft? You'll need to think about something interesting to bring aboard Zero-G's ageing Boeing 727 to get your mentor airborne and, briefly, floating. 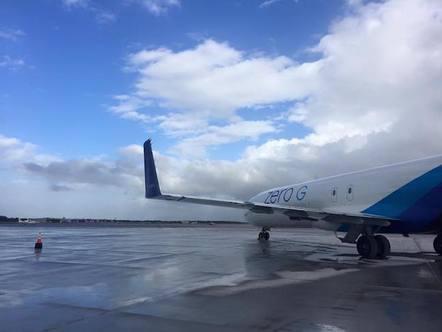 The company has launched a competition, Mission: Microgravity, aimed at showcasing a handheld, creative and "thought-provoking" experiment over the course of 15 parabolas.

Based on my own experience of a flight in the aircraft, drawing a smiley face on a sick-bag would result in something both handheld and creative. Pondering the contents of one's stomach would also, we suppose, count as thought-provoking.

It's only open to participants in the US, where one lucky teacher of grades 8 to 12 (secondary school, in UK terms) will climb the stairs into the padded, wipe-clean interior of the elderly Boeing 727 on a free jaunt to try out whatever experiment the little darlings have come up with.

Entrants must post a video to social media explaining their students' plans between 1 May and 7 May 2019. Content must be a little more detailed than "I want to see what happens if Miss Smith drinks 12 sodas and then does 15 parabolas".

Although the propulsive properties of the subsequent violent expulsions would certainly merit some investigation.

Your correspondent took a flight on Zero-G's finest and while the experience (which involved simulating lunar and martian gravity before attempting the "Superman" as the aircraft plummeted) is both highly recommended and unforgettable, equally unforgettable was the gastric reaction of several of the participants. A delay had led several flyers to pop out beforehand for pizza and Coke against the advice of Zero-G.

The results were... not good. My plea for "just one more" parabola didn't go down at all well with those strapped in with heads between knees.

A top tip for the competition would therefore be to devise something to persuade flyers to take heed the company's warnings, and something to help the unlucky crew clean up after those that don't.

It's all very laudable, although pales into comparison with programmes such as the Student Skylab Project, which picked 19 proposals out of 4,000 submitted by students to be flown on the laboratory, including one that famously tested the ability of spiders to create webs in micro-gravity.

For the experiment, the Zero-G gang has warned against anything that uses large quantities of liquid, and taking animals or insects aboard is a definite no-no. Students also have to remember that there is only around 30 seconds of floating around per parabola and that it will be the teacher conducting the experiment.

So nothing too hard to operate. After all, we're talking about a profession that has historically struggled to even coax video out of televisions. ®

Step one: Run malware on your victim's machine. Step two: Mount some storage...

It's been a rough September for the digital fun-bucks

Lavazza's latest brew, with a slight psychological hint of urine