I slapped you in Nebraska, sunshine, not California 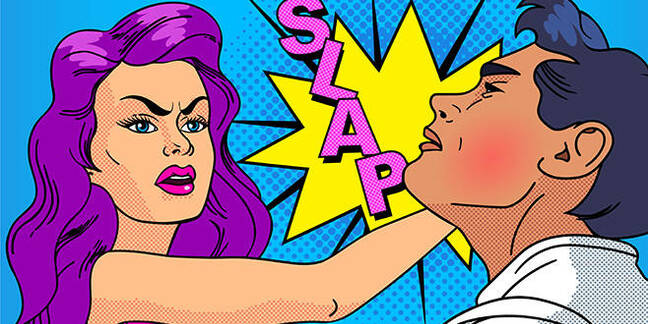 Special report In the internet era where people are able to interact across wide geographic areas, the world's legal systems have struggled with the question of where an offence occurred and so where a lawsuit or criminal charges should be lodged.

But this month, the most tech-savvy court in America, the Ninth Circuit Court of Appeals, faced a less virtual and far more physical question: where exactly, while mid-flight, did one airline passenger slap another, and should that have a bearing on the subsequent legal case?

Amazingly, the court decided that, yes, you should figure out in, or rather, over which jurisdiction a crime – in this case, assault – occurred, even if it happened while soaring through the skies at 35,000 ft, and file a lawsuit there. For Monique Lozoya, the slapper, and Oded Wolff, the slappee, that is not California but instead Nebraska.

It really depends on where the plane was at the time of spat.

As ridiculous as it may sound, the court decided that "the proper venue for an assault on a commercial aircraft is the district in whose airspace the alleged offense occurred."

But before we get to that and the fact that it may require the US Supreme Court or Congress to resolve the issue, let's dig into the fight itself.

Monique Lozoya was flying with her boyfriend on Delta Airlines flight 2321 from Minneapolis to Los Angeles back in July 2015. She was sat in the second-to-last row and behind her was Oded Wolff, who traveling with his wife.

You can probably guess what happened already. If you've ever been unlucky enough to get stuck in those back-row seats, you'll know that they don't recline. And if the seat in front of you does recline it can be uncomfortable to say the least.

And so the eternal seat-back etiquette battle began. Lozoya wanted to sleep but was unable to because her seat was constantly "jostled" by Wolff behind her who was trying to watch his TV screen positioned in the back of her seat. According to the passenger sat next to Lozoya, Wolff is one of those passengers willing to let their frustration known repeatedly.

And then it turns ugly

We've all been there. Except in this case, things got out of hand. Wolff and his wife went to the toilet and when they came back, Lozoya decided to have it out with him. She asked him to stop hitting her seat and he didn't take it well.

Accounts of what precisely happened at this point diverge – who shouted at who and whose hands went where – but everyone agrees that Lozoya ended up smacking him with the back of her hand and his nose started bleeding.

At which point a flight attendant swept into view and tried to calm everything down. And they did a pretty good job: they got both Lozoya and Wolff to agree to meet up after they got off the plane in Los Angeles and talk it through.

It wasn't perfect, however: Wolff said he would listen to her explanation and only then decide whether to accept her apology or to press assault charges. But you can see how once everyone had calmed down a few pleasant words and an apology could resolve the whole thing.

Except once she'd got off the plane, Lozoya decided she didn't want to apologize to the man who had been shaking her seat and walked off. And Wolff, infuriated, decided he would press charges. And so began a four-year legal battle – with a lawsuit lodged in the Northern District of California, where the plane landed.

There was a bench trial and the magistrate found Lozoya guilty of assault, although the judge did note that it was a "really an unfortunate situation borne out of a misunderstanding in a situation that I think almost anybody that flies commercially can relate to." But Lozoya wasn't ready to let it drop and appealed. The district court then reached the same conclusion and fined her $750.

At which point, you would imagine she would put it down to experience and let it drop. But not our Monique. Her lawyers appealed the case and made a couple of novel legal arguments, including that the lawsuit has been filed in the wrong jurisdiction: it should have been filed where the slapping happened, not where the plane landed.

This argument should have gone nowhere especially since both the Tenth and Eleventh Circuits decided in previous judgments that where a plane lands is the proper legal district for any legal disputes.

'This repository is private' – so what's it doing on the public internet, GE Aviation?

Fancy talking to Virgin and Amazon? Get into the CAA

Partners now have trade wars to fly around

Aviation regulator flies in face of UK.gov ban, says electronics should be stowed in cabin. Duh

If lithium batteries go boom in the hold, you're all screwed