Thanks to the NASA InSight probe (and British tools), you can now listen to the sound of a Martian earthquake 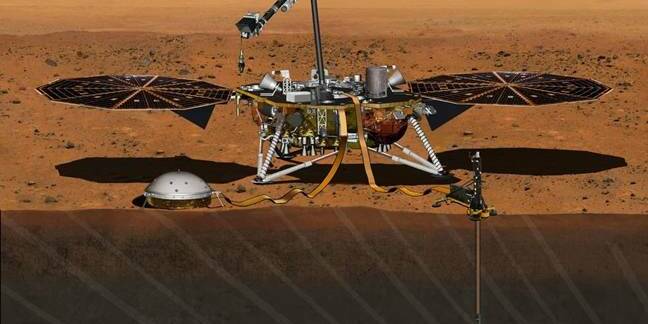 Video NASA’s InSight lander has detected seismic waves on Mars for the first time and the space agency is letting everyone else listen in too.

Scientists working with the InSight’s Seismic Experiment for Interior Structure (SEIS) instrument Have recorded four of the so-called ‘marsquakes’ since the instrument came online but the newly-unveilled 6 April event was the loudest. That date marked the 128th Martian day, also known as a sol, since the mission began and the other quakes occurred on March 14 (Sol 105), April 10 (Sol 132) and April 11 (Sol 133).

“This is what we what we were all waiting for, the first quivering of the planet picked up by our sensors,” said Tom Pike, a professor of microengineering from Imperial University London, who helped build the tiny microseismometers for the SEIS.

“We worked hard to develop the most sensitive silicon sensors on Earth to send to Mars as part of SEIS. Up to now we didn’t know if even that was going to be good enough. But it looks like Mars, although very much quieter than Earth, is giving us seismic signals we are able to clearly detect. Our first investigation of the interior of another planet is now under way.”

Funded by the UK Space Agency, the sensors cost £4m (~$5.17m) and was built by a team of researchers from Imperial College London, the University of Oxford, and RAL Space, a British government funded research lab focused on space exploration.

SEIS works by measuring tiny vibrations on the order of the sub-atomic scale from waves caused by marsquakes, meteorite impacts striking the Martian surface and dust storms. The instrument is housed in a protective vacuum covered by a metallic shell made out of chain mail. The InSight lander also has a 1.8-meter-long robotic arm with a grapple at the end to deploy a heat flow probe into the ground.

The researchers are able to separate real signals from noise after they studied the background sounds in more detail. A low rumbling wind also causes vibrational energy to be captured by SEIS, which the team could tune out when searching for marsquakes.

Mars isn’t the only other body to have seismic activity. The Moon trembles with “moonquakes” too. “Thanks to the Apollo missions of the 1960s we know that moonquakes exist,” said Sue Horne, Head of Space Exploration at the UK Space Agency.

“So, it’s exciting to see the Mars results coming in, now indicating the existence of marsquakes which will lead to a better understanding of what’s below the surface of the red planet.”

The announcement was made on Tuesday during this year’s Annual Meeting of the Seismological Society of America held in Seattle.

The InSight lander will continue to study the interior structure of Mars in the hopes that it will shed light on how the inner rocky planets in the Solar System formed. ®