Huawei P30: New No-Pro's cameras are flash ... but there are some curious bits

As solid as ever, but not such a bargain any more

Review Perhaps it's an English thing about being fair to the underdog, but I quite warmed to Huawei's "ordinary" P series model last year, while its attention-seeking big brother P20 Pro hoovered up all the attention.

Despite missing some tickbox flagship features, the plain ol' P20 offered much of the low light capability of its more expensive sibling, it was compact, reliable, it and crucially, priced in a newly vacated gap in the market.

But can any Huawei phone be regarded as the "underdog" in 2019? And more to the point, it's £100 more than the model it replaces. 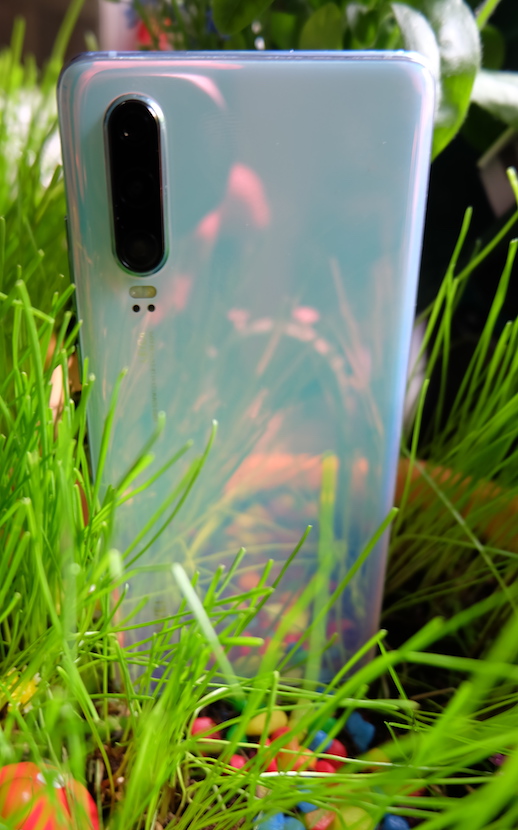 The P30 is pretty much the same size as the P20, remarkably. It dispenses with the small front-facing fingerprint sensor, allowing for 100 extra vertical pixels in 0.3 inches of display height. That design change also permits a slightly higher (by 250mAh) battery.

In today's market of giant slabs, I'd say this qualifies as a "compact". I really like the iridescent glass effect Huawei deploys here, which works spectacularly well on the "Breathing Crystal" variant. Yes, I know, this sounds like a New Age mindfulness workshop, but the multilayered glass that reflects blue and twilight pink hues (depending on how you hold it), is subtle and cheerful.

The P30 differs from the £100-more-expensive Pro not only by being more compact, it has a more modest, but still impressive, camera system. It adds an audio jack (missing from the Pro). However it lacks infrared and more bafflingly, Qi wireless charging. Perhaps Qi would have added to the bulk of the device but this is now fairly standard in phones over £500 SIM-free. Huawei's immediate rivals at this price point generally all include wireless charging.

It lacks 5G too, but that isn't really a factor this year, as the 5G deployments we'll see this year are really live betas.

I appreciated the outstanding build quality. Huawei's in-display fingerprint sensor worked well here, but not one model on the market has the dependability or speed of the far more mature dedicated sensor. I know many people demanded in-display fingerprint recognition, but be careful what you wish for. This is still first-gen technology.

Call quality was excellent, as you would expect from the most consistently reliable phone maker, and the modem really shows up the poor quality of the current, Intel-powered iPhones. Battery life sees an improvement over last year's too. 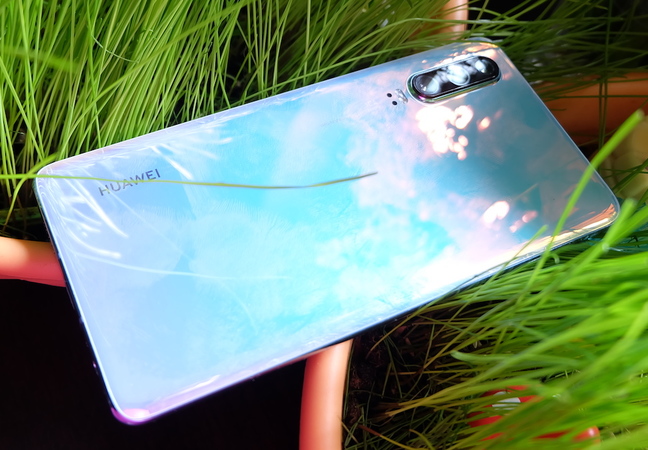 Huawei's fast-charging is excellent, although a little off the advertised claim, going from 17 per cent to 55 per cent in 33 minutes, and hitting 91 per cent in 66 minutes. That fast top-up has allowed users to forgo the nightly charge.

I wasn't best pleased to find that the power button had been captured and imprisoned by the Google Assistant. For years I've been able to rapidly activate the camera on almost any Android by double-clicking the power button, but that doesn’t work any more. Even worse, I found I couldn’t reboot the device without un-mapping Google's AI data slurper. Thanks, Huawei! 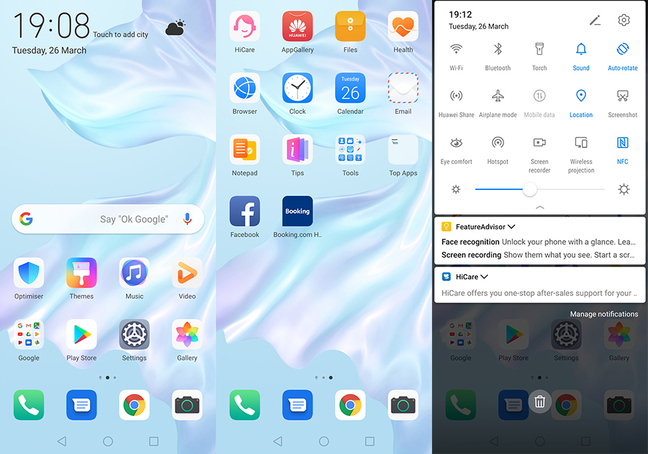 The P30 family introduces the latest (9.1) version of Huawei's EMUI skin, and the best thing about that is that scrolling around the launcher is now as silky smooth as on an iPhone, and app startups are very rapid. Otherwise EMUI is an incremental improvement.

The really big change to the user experience, and it's huge, year-on-year, is because of the large number of services now bundled with the device. Huawei has always been relatively naggy, but now it offers more: the requests for data permissions and other prompts are endemic. Huawei now even bundles its own browser and App Store and music service with a phone – it didn't a year ago. This is very much a version 1.0 product – you can only set the search engine to Google as yet.

Forget the idea of turning on the phone for the first time and politely declining to use Huawei services, as you're already on (say) Google or Microsoft's cloud. Huawei now replicates much of that functionality, such as photo storage, backups and passwords. The requests will continue to surprise you across the device. As with Samsung's Bixby, there's a whiff of desperation to it.

Some are useful: the App Assistant allows you to protect certain apps from Huawei's aggressive power management regime.

Many professional and technically educated users have never warmed to EMUI, but I wonder how many ordinary users really care. If the phone remains fresh a year after purchase, most will be more grateful for that.

With Google dropping the ball on UX (Android is very much is the second class citizen at the Chocolate Factory, behind Chrome) with gestures that replace the navigation bar, each phone maker has their own gesture semantics. Huawei closely apes Apple's, and does it quite well. The visual feedback is nice and clear. The response to gestures isn't quite as smooth using a third party launcher as using EMUI, but it got better during the review period thanks to a software update.

I think Samsung has a much stronger all-round "retail offer", with a very decent email client, a browser that supports plug-ins (cough, aka an ad-blocker) and payments, and a thoroughly credible range of companion wearables. Samsung has de-cluttered while Huawei has um, cluttered. 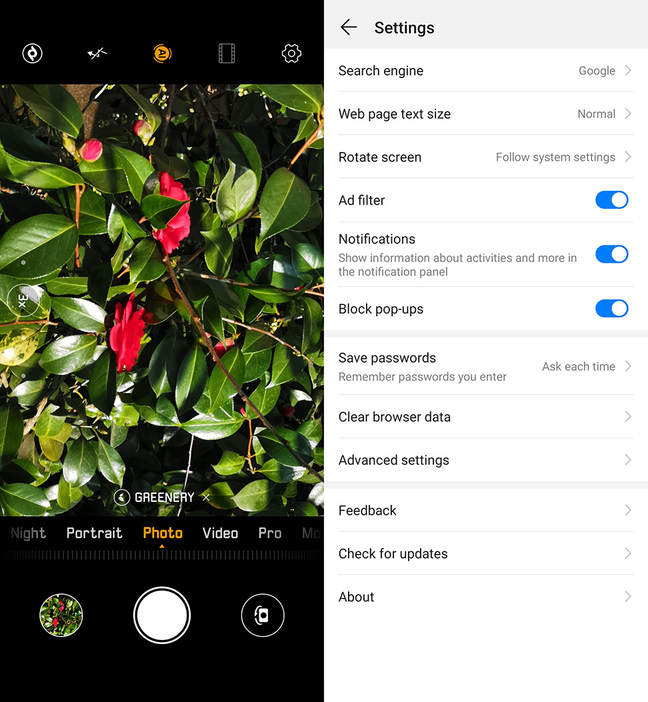 The Viewfinder [right] and Browser settings [left]Click to enlarge 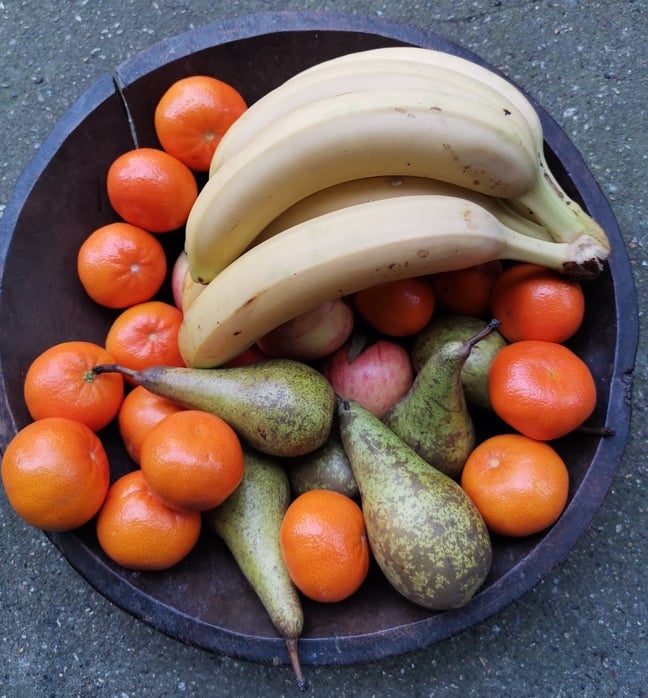 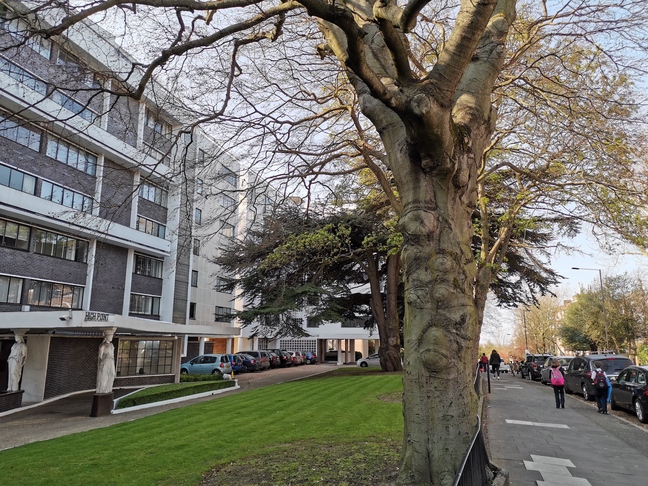 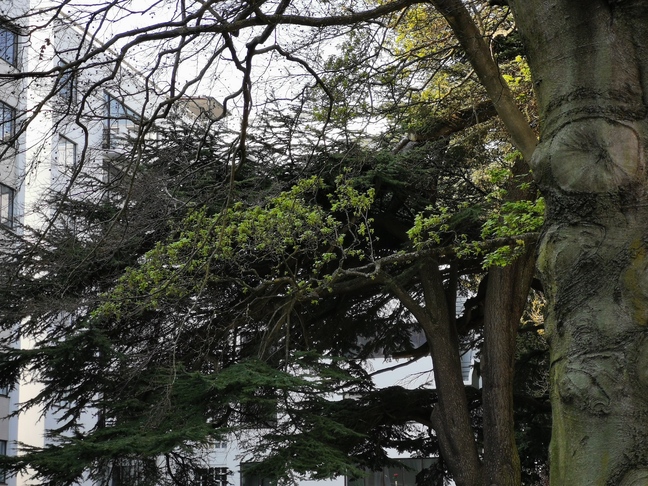 The P30 shows considerable improvement on shots that caused problems on the P20 a year ago. Last year's model was too aggressive with the sharpening and detail, and lost the colour balance. This year, the P30 does much better.

In the first shot below I've used "AI", giving the postbox a lurid red, as if it has landed from another planet where they make replica postboxes but don't quite get it right. It looks plain weird. 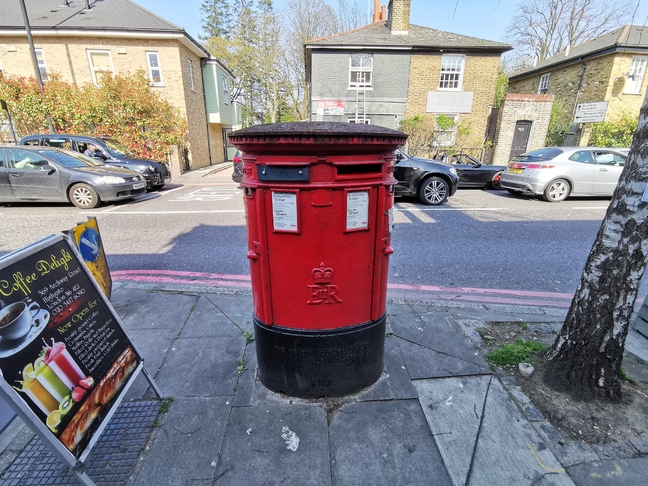 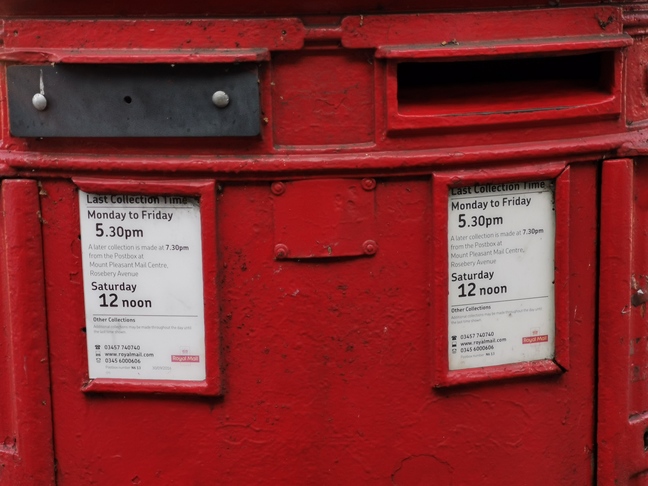 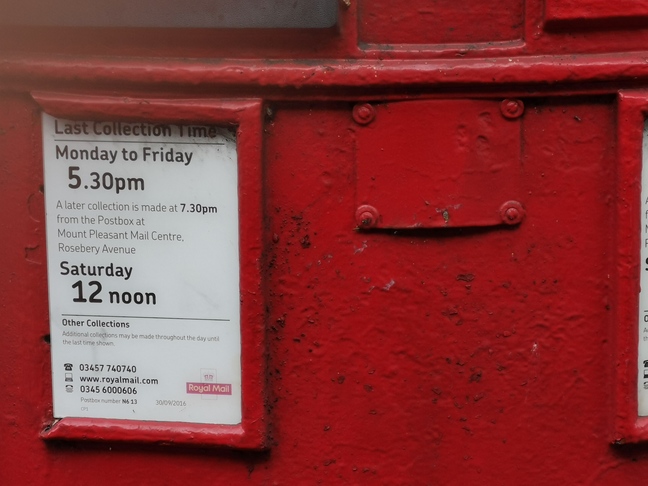 Saturation is also better this year, the first being an example of the super macro mode, the second reverting the oversaturated blow out we often see from Huawei/Honor phones. 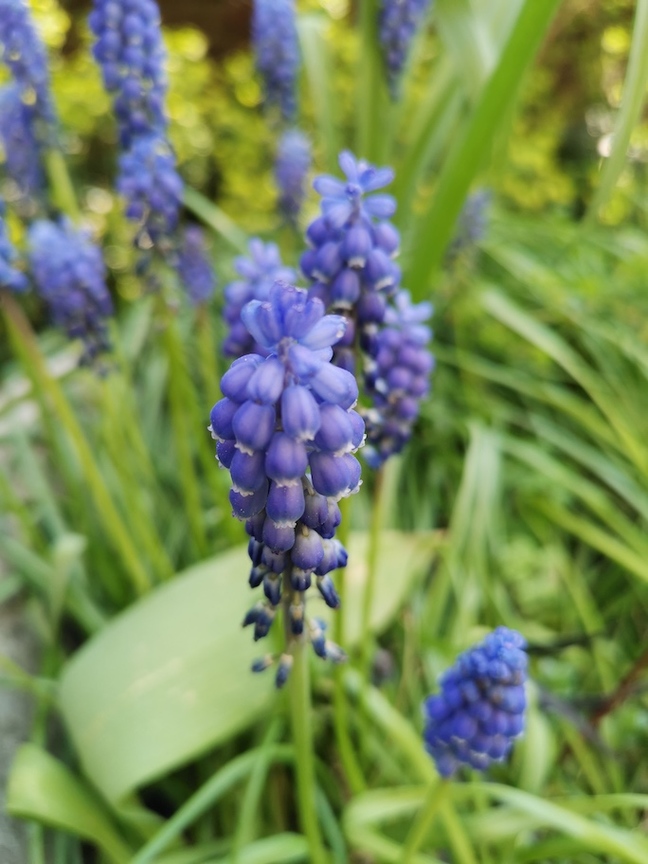 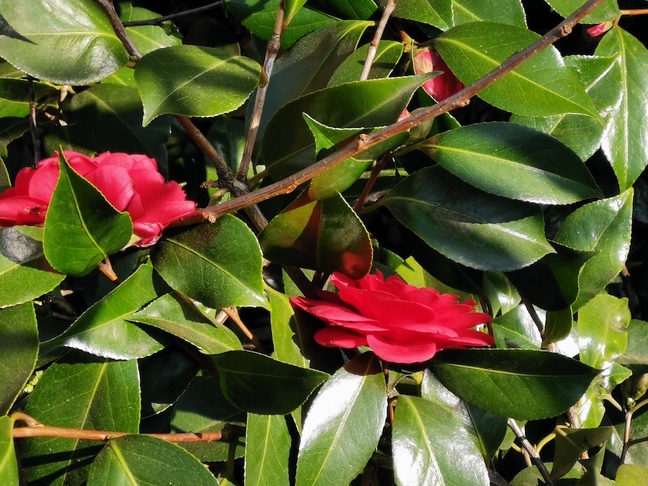 The first step up on the camera app's zoom slider is 3x ("lossless"), and the next 5x. Using the P30 merely confirmed that I very rarely need more than a 3x zoom, although your mileage may vary. Here are zooms at 5x and 10x. 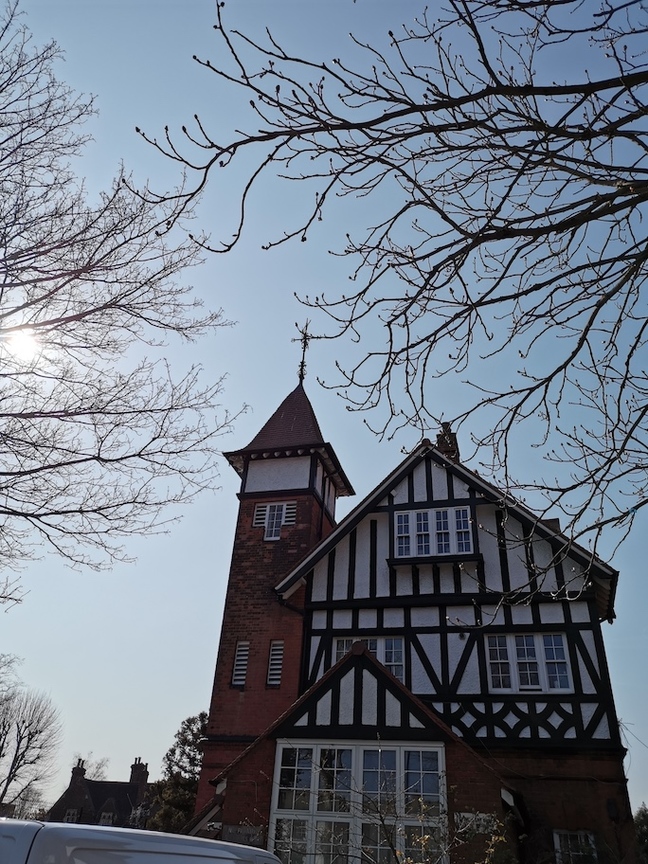 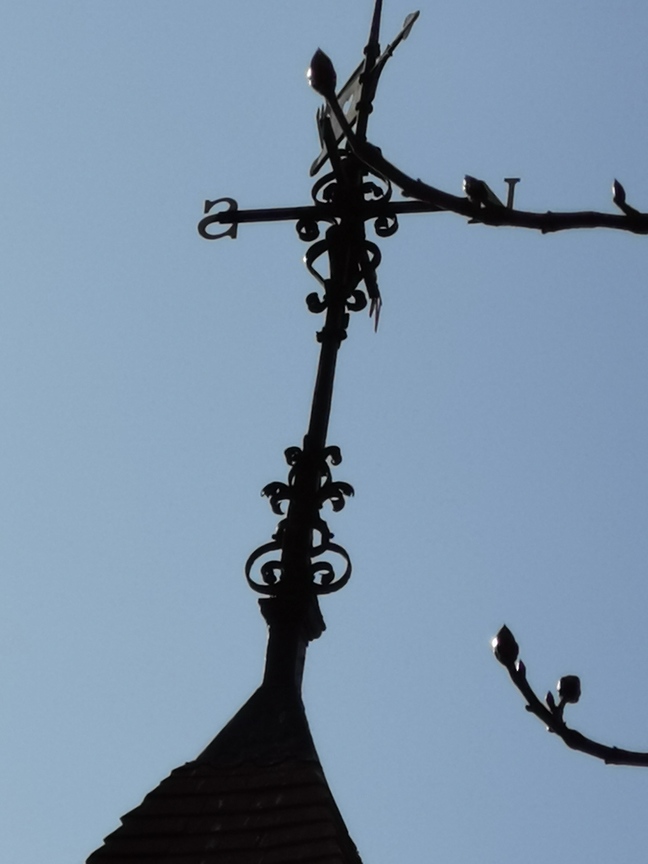 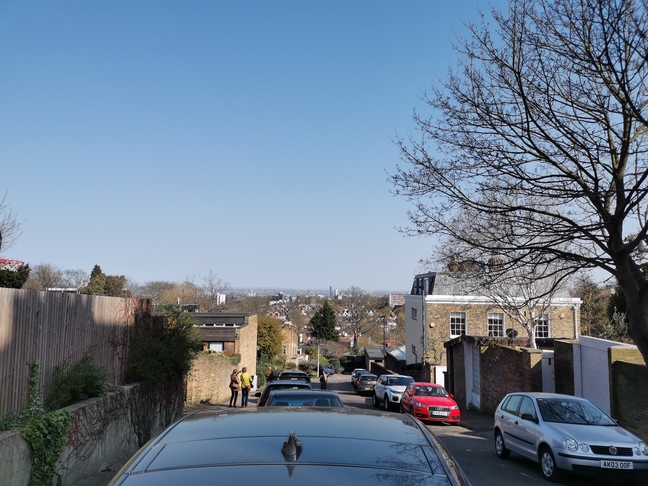 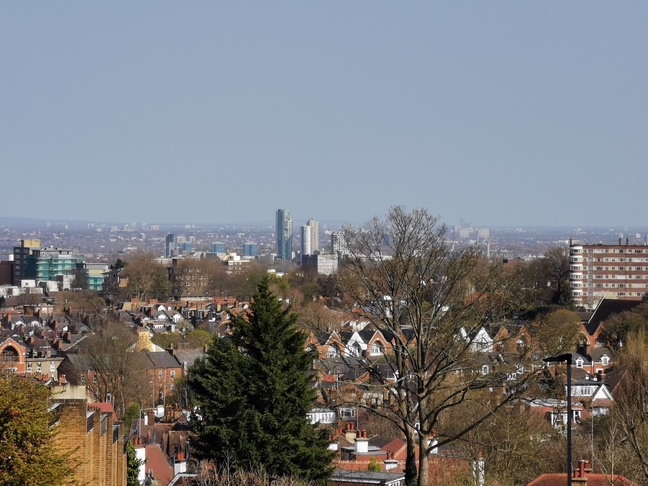 Overall, the P30's camera is a very respectable performer. The wide angle mode and (mostly) closeups worked well. Using the in-built tools, I could tease some very fine portrait shots out of the results. As with last year, the ability to illuminate a low light scene can still astonish. As with the P30 Pro, though, the video results were fairly underwhelming, and need much work.

What was a £599 punt in 2018 is now, in 2019, a more hefty £699 investment. And, alas, the P30 is still missing features that really should be standard now, when handing over that kind of money. The market continues to shift, the P30 enters a highly competitive part of the market. Samsung is getting its act together with its Galaxy S10E, where £669 buys you similar specs (6GB/128GB), but a superior screen, slick UX, Qi wireless charging, a more affordable microSD slot, Samsung Pay.. and it's 15g lighter. 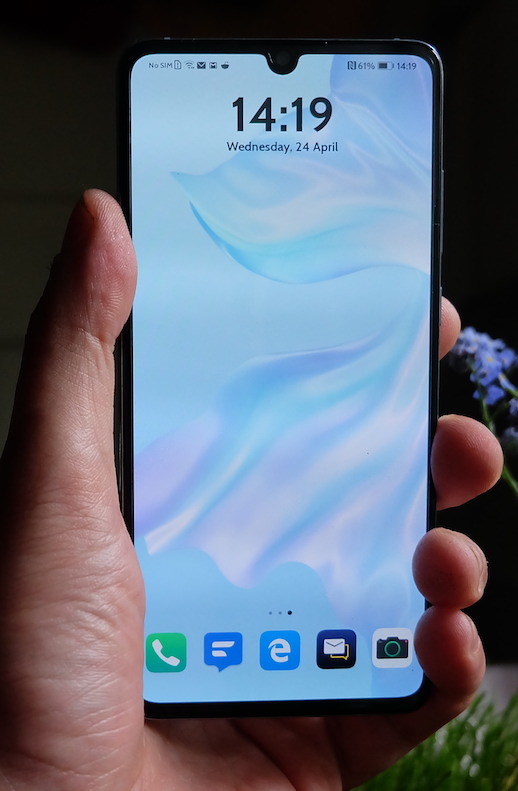 With its curious omissions and eccentric choices, the P30 is harder to recommend. ®