A chap who runs a B&B an actual stone's throw from the US-Canada border has been ordered to put up a sign warning guests not to cross as a bail condition.

It should be noted that the hostelry in Blaine, Washington, is named the Smuggler's Inn.

CBC reported that its owner, Robert Joseph Boulé, appeared in the Provincial Court of British Columbia, just north of the border in the city of Surrey, yesterday morning to face 21 charges of allegedly "inducing, aiding or abetting" seven people who attempted to illegally enter Canada.

The 2m x 1.5m sign – one of just 16 other bail conditions Boulé needs to meet if he wants to avoid porridge for now – must read "Warning. It is illegal to enter Canada from this property" on both sides and be situated within three metres of the border. 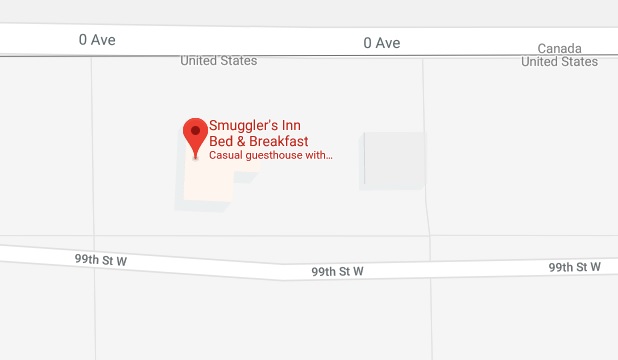 Yes, it really is that close (Pic: Google Maps)

Unfortunately, the circumstances surrounding the property are not so anodyne. "A 21-year-old guest... was caught in 2011 by US Department of Homeland Security agents heading to the inn with 11 kilograms of cocaine jammed into a box," according to CBC's report.

The offences Boulé stands accused of are alleged to have taken place between May 2018 and March 2019, and breach court orders that Boulé was "not to assist any person in the United States with attempting to enter Canada illegally".

The Register suggests that a subtle rebranding exercise might help keep the attention of the law and ne'er-do-wells away from the place. "Definitely Not A Smuggler's Inn" is a strong mission statement. ®