The OpenStack Foundation has announced that Kata Containers and Zuul have been very, very good and so worthy of the moniker "Top-Level Open Infrastructure Project" after the teams met the foundation's lofty goals.

To score the confirmation, a project needs to be aligned with the aims of the OpenStack Foundation (OSF), have actual governance procedures, follow the "Four Opens*" of the OSF and keep up an engaged and interested community.

Tick all the boxes, and the OSF will commit to carrying on supporting the project, now freshly shorn of the "pilot" sobriquet. 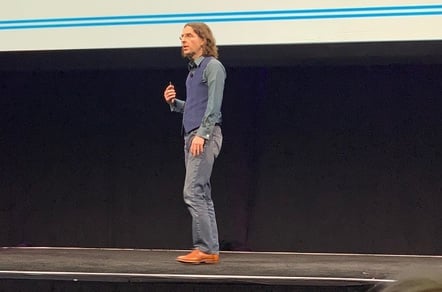 Kata Containers, which became an OSF pilot project in December 2017 is all about creating a secure runtime beneath container technology such as Kubernetes via lightweight virtual machines. The technology supports a variety of hypervisors including QEMU, NEMU and Firecracker, which took a bow in Kata 1.5 and was originally developed by the AWS gang.

The latter is particularly interesting since its minimalist design means a titchy footprint and a faster start-up time. However, as the team acknowledges, it doesn't handle every container workload. For example, direct device assignment, bashing a GPU or dynamically adding CPU and RAM are not in Firecracker's utility belt.

For that, the team teased rust-vmm, a container-specific hypervisor written in, you guessed it, Rust.

Zuul, the Gatekeeper of Gozer

The second project to shed the pilot prefix was Zuul, a gate-obsessed continuous integration and delivery pipeline tool. Yes, another one.

While the imagery (and Ghostbusters reference) might call to mind a gate (one to keep the code demons at bay) Zuul is actually all about pipelines, with a "gate" pipeline potentially implementing "Project Gating" where changes are only merged if tests pass.

The Zuul team has taken this further, as project leader (and Red Hatter) James Blair explained from the Open Infrastructure stage during Denver's OSF shindig. With the unfortunately named "Speculative Execution" feature (words that sent a shiver through an audience battered and bruised by Spectre and Meltdown mitigations) developers can play a game of "What if?" as part of the project gating process.

Blair said allowing developers to see the potential effect of their changes (be it anything from code to a tweak to the base container image) is a handy feature, modestly describing it as "a new way to experiment in a way that was previously inconceivable."

Zuul has, of course, been doing that for code for a while now, with devs able to see the effect source changes will have before merging into the repository. The gang are now implementing the functionality in the container world with changes to base images sent down the "what if?" path to see the impact on container images stacked above before any potential nasty seeps into production.

The transparent process allows testing to see the whole world in light of the change, rather than just the change itself. Once passed, those exact images can then be promoted into production.

The aim, according to Blair, is "to make testing more like production, not the other way around."

We can think of at least one Seattle-based software giant that would glumly agree. ®

* The "Four Opens" of the OSF are Open Source, Open Community, Open Development and Open Design. Not to be confused with the "Four Horsemen of the Apocalypse": Death, Famine, War and Microsoft Bob.