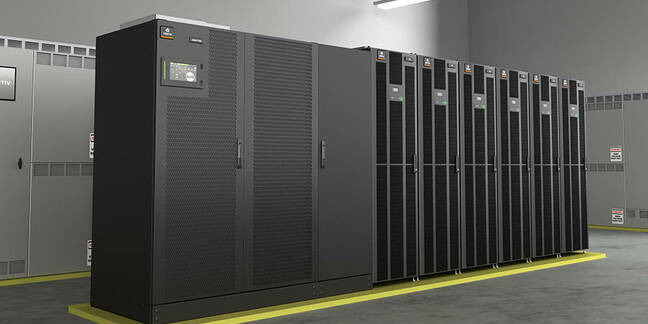 US data centre power biz Vertiv reports that li-ion cells are selling like hot cakes, and are now responsible for a third of its battery business - despite lingering concerns about their safety among some IT pros.

The company has launched a new battery box designed specifically for li-ion – its first product to use a homegrown battery management system (BMS). Such systems are designed to protect the cells against over-current, over-voltage and temperatre anomalies; a proprietary BMS could alleviate some of the concerns typically asscoiated with introducing li-ion into the server room.

The Vertiv HPL system is sized like a standard server cabinet and contains six battery modules, equipped with sensors to enable real-time monitoring at the cell, module, system and facility level.

It can support 200 kW of IT per box – with average power densities being somewhere between 5kW and 10kW per rack, a single unit would easily serve an entire data hall. Up to eight battery cabinets can be connected to a single UPS for more capacity.

The HPL is compatible with most current and legacy Vertiv three-phase UPS systems. It is available immediately in the US and Asia – Vertiv told The Reg that availability in EMEA is expected in late Q3.

Li-ion batteries offer several facets to data centre operators: they are smaller and lighter than traditional valve-regulated lead-acid (VRLA) batteries, but supply the same amount of power and their lifespan is approximately twice as long.

On the downside, they cost approximately twice as much, and there are long-standing concerns about their safety, no doubt inspired by an endless barrage of stories describing mobile devices exploding and catching fire.

Li-ion enthusiasts like Schneider Electric (PDF) have long maintained that thanks to their lenghthier lifespan, the total cost of ownership of li-ion power backup systems is actually lower than VRLA-based systems – as long as you’re planning to sweat your assets for at least a decade.

“Lithium-ion batteries are increasingly common in the data centre, now representing about 30 per cent of our deployments worldwide,” said Jeff Kessen, veep for energy storage at Vertiv. ®