Updated Cloud backup bods Backblaze this week cracked open another spreadsheet and fed it some log files, spitting out a bunch of fresh drive availability stats that show a mild uptick in Seagate drive failures.

Over the last three years, the general trend for both Seagate and HGST has been that annualised failure rates (AFR) have fallen, however, Backblaze has noted a shift in the opposite direction of late.

The storage provider - as you'd expect - uses thousands of Seagate drives, as well large numbers from HGST. It has tracked their AFR and charted them by calendar year quarters.

Backblaze has been previously rapped for skewed analysis by not flagging up that certain drive models are a lot older than those they were compared to - among other issues such as sample size and favourably comparing consumer drives to enterprise grade HDDs.

As ever, we'd like to point out that this not an exhaustive study: Backblaze has just four brands in its estate, with models ranging from older 4TB units - which it is slowly deprecating - to newer 12TB and 14TB drives. 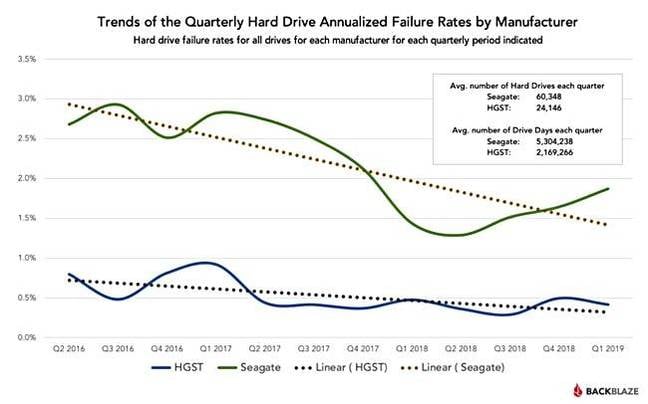 The graph from Backblaze's Andy Klein, its director for compliance, shows a steady downward trend overall, both for Seagate, which has the highest AFR, and HGST. The difference between the two has been decreasing as Seagate has improved its AFR.

However, the firm claimed there had been an uptick in failure rates of the Seagate drives in its estate since the first quarter of 2018. Klein opined: "While Seagate has reduced their failure rate over 50 per cent during that [three-year timeframe], the upward trend over the last three quarters requires some consideration."

Backblaze didn't include the numbers for Tosh and WDC drives as it didn't have enough drives from those manufacturers to observe any trend.

Backblaze provided a table showing drive failure rates in its data centres during the first quarter. 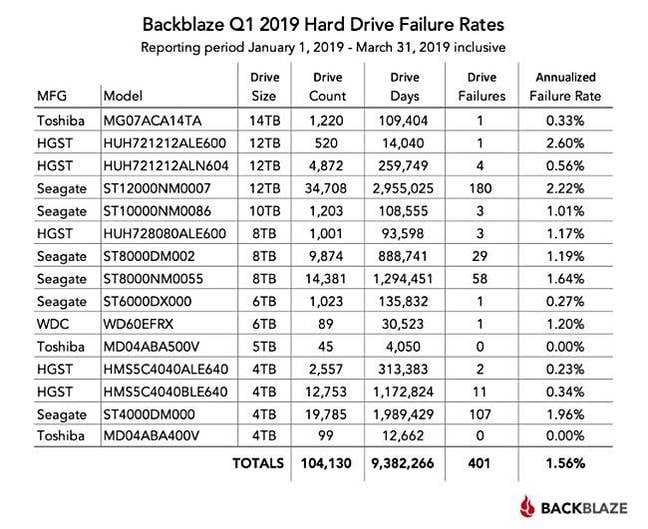 The highest AFR, 2.6 per cent, comes from a 12TB HGST helium drive. A different model of that drive has a much lower AFR, 0.56 per cent.

Another chart looks at the disk drive capacity levels used by Backblaze and their AFR, using Backblaze's numbers from the table above: 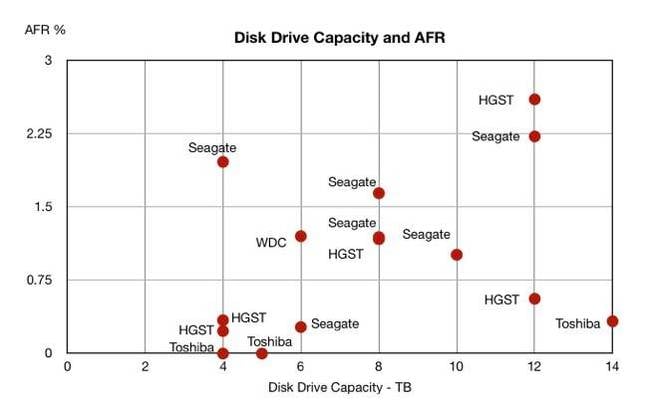 It shows a general trend of improving AFR numbers with several points clustered along a high left to low right diagonal line. The chart also shows Toshiba has provided the most reliable drives to Backblaze: two of them have a zero per cent AFR.

A Seagate spokeswoman contacted us with the following statement:

"Seagate works continuously with its global customers to monitor the performance of our products and use that information to refine our designs. We are committed to ensuring our data storage products offer world-class, competitive reliability and quality over a wide range of capacities and form factors.

"We are proud of the fact that Seagate drives are regarded as high quality and extremely reliable. And we back them with an industry leading 5-year warranty. Customers should also make sure they purchase the right product for the task at hand to ensure the best overall experience and performance." ®