Cocaine, psychedelics, DMT? They sure knew how to party 1,000 years ago: Archaeologists make startling discovery 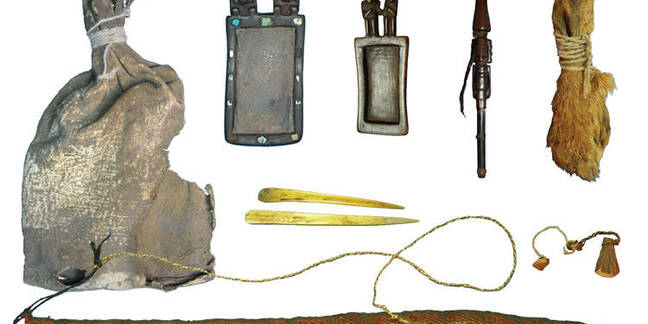 An image of the leather sack and its contents ... Image credit: Juan Albarracin-Jordan and José M. Capriles

Pic Humans have been tripping off hallucinogens for at least a millennium, according to a crew of archaeologists who discovered a 1,000-year-old pouch of mind-bending drugs in a Bolivian cave.

The team discovered a strange leather sack buried in a rock shelter in southwestern Bolivia and took a peek inside. They found a pouch and a range of tools, including spatulas made from llama bones, a small tube, tiny carved wooden containers, and a long strip of fabric.

These mix of objects may have seemed odd at first, but when the researchers chemically analysed the contents of the pouch using liquid chromatography tandem mass spectrometry technology, it all clicked into place. The seemingly innocuous pouch, made out of three fox snouts snitched together, contained traces of cocaine, harmine, and dimethyltryptamine (DMT), the latter being part of the drug ayahuasca that is still used by shamans and drug tourists today.

It seems they had discovered the remains of an ancient drug stash. Using carbon dating, the researchers estimate the paraphernalia are about a thousand years old. The tube was probably made for sniffing powders, the wooden containers are "snuffing tablets," used for preparing the drugs and the fabric was probably a headband to keep the hair away as someone cooked up illicit substances with spatula.

“This is the first evidence of ancient South Americans potentially combining different medicinal plants to produce a powerful substance like ayahuasca," said Melanie Miller, first author of the paper published in the Proceedings of the National Academy of Sciences of the United States of America and a research associate at the University of California, Berkeley, on Monday.

Ayahuasca is popular among hippy-dippy techies, celebrities, drug connoisseurs, or people lost in life, for its powerful psychedelic experiences that are said to promote spiritual healing. Unlike other recreational psychedelic substances, ayahuasca is not for the fainthearted.

“The tryptamine DMT produces strong, vivid hallucinations that can last from minutes to an hour, but combined with harmine, you can have prolonged out-of-body altered states of consciousness with altered perceptions of time and of the self," explained Miller. It also puts people into a purgative state, causing them to vomit furiously and it occasionally leads to diarrhea, too. So it’s not exactly made for clubs or parties.

Instead, ayahuasca is made for sacred rituals. "There are civilizations who believe that, by consuming certain psychotropic plants, you can embody a specific animal to help you reach supernatural realms, and perhaps a fox may be among those animals," said Miller.

She believes that whoever owned the drug sack must have been very experienced and knowledgeable in how to prepare and find the ingredients for ayahuasca. The plants found do not grow around the same altitudes of the cave, so it’s possible that the owner was probably a wandering shaman or a drug dealer of some sort. "A lot of these plants, if consumed in the wrong dosage, could be very poisonous,” she warned.

"Our findings support the idea that people have been using these powerful plants for at least 1,000 years, combining them to go on a psychedelic journey, and that ayahuasca use may have roots in antiquity." ®