Supernova of allegations turns into black hole for HPE

Autonomy Trial Autonomy's former US head of sales made a series of startling admissions in court yesterday which contradicted his witness statement, throwing a curveball into Britain's biggest fraud trial.

Christopher "Stouffer" Egan's second day in the witness box was characterised by him admitting that in some instances he could not state as a fact that Autonomy CEO Mike Lynch knew about his company's allegedly dodgy revenue-bulking tactics.

I just got here – what's it all about?

In 2011, HP bought Autonomy – a maker of software to keep track of unstructured data, founded by Mike Lynch in the UK – for $11bn.

While he faces the civil case in London, Hussain awaits sentencing in the US after being found guilty of criminal fraud by an American court last year.

Egan had been the "star witness" in the US criminal trial against Sushovan Hussain, having signed a deferred prosecution agreement and agreed to testify against his former bosses.

Miles referred to a particular deal Autonomy's management struck with software company Filetek, and Egan's assertion that Lynch and Hussain "knew that the primary reason for the deal was Autonomy's need for additional revenue in Q1 2010".

The barrister asked: "So there you are, on the face of it, giving some evidence about Dr Lynch's state of mind at that time. Now, I think you've agreed that in fact you can't properly give that evidence because you do not know what was Dr Lynch's understanding at that time?"

Egan replied: "I maintain that we as a group would have elected to do this deal differently or later if the primary reason were not for the revenue," trying to keep his answer consistent with his written witness statement.

Miles went for the jugular: "You're unable to give any evidence about what [Lynch] understood the purpose of this acquisition was, how useful it would be, any of those matters, because you didn't discuss any of those with Dr Lynch, did you?"

Egan has signed a deferred prosecution agreement with the US government, meaning he has admitted his own wrongdoing over some of Autonomy's deals. HPE's argument is that many deals had no real commercial value and were struck mainly to bulk out Autonomy's revenues by moving cash in a circle that began and ended with the British software firm, making it a more attractive prospect for a buyout.

The real hit for Egan came when he was questioned about paragraph 40 of his witness statement, which reads, in part, as follows:

Dr Lynch was aware of, and was required by Autonomy's internal procedures to approve, all purchase made by Autonomy in the amounts involved in these deals. Mr Hussain, Dr Lynch, [COO] Mr Kantar and [CTO] Dr Menell also generated emails whose purpose, in my opinion, was to create the appearance that Autonomy had a genuine need for the other company's product or service. From Autonomy's perspective, the reason for the round trip deals was that they generated revenue that was recognised in the financial period in which Autonomy's sale to the third party was made. The revenue would not otherwise have been recognized because, except for the quid pro quo feature, the other party would not have purchased the autonomy software licence, or would not have paid the price that it did pay to licence the Autonomy software.

"You don't give any examples at all there of any emails that Dr Lynch was involved in preparing or generating, do you?" asked Miles.

Miles then read out a transcript of Egan's testimony to the US criminal trial. There, where he was asked who created fake email chains to help forge the appearance of real revenues, he named Kanter, Menell and Hussain as being involved – but not Lynch.

"You're not actually able to give any evidence, are you, that Dr Lynch was involved in generating emails to create the appearance that Autonomy had a genuine need for the product or service?" Miles asked Egan.

"No," conceded the salesman, trying to strike back by adding: "I can't, here, today, tell you I remember emails from Dr Lynch that were pretextual. I believe that at the time I created this statement that I was aware." 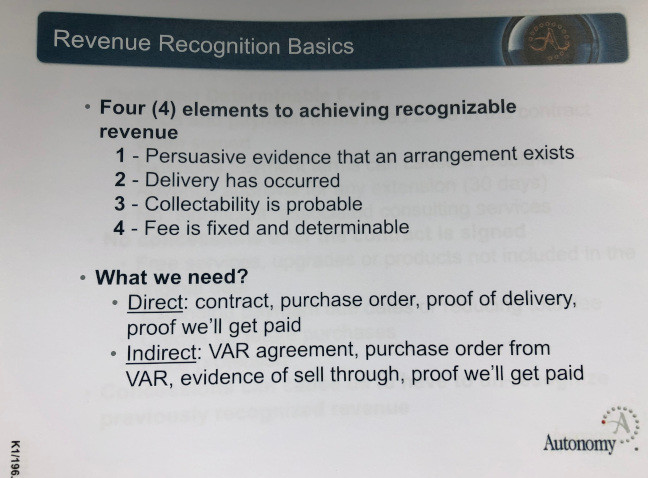 An internal Autonomy guide to revenue recognition, as exhibited in court yesterday

Picking up a theme from yesterday about whether Egan was just parroting things he had been told to say, Miles retorted: "Is the reason that Dr Lynch's name appears in that list that this statement was produced by some lawyers and you thought it was right to sign the statement because that's the evidence that HP wanted and you never thought you'd have to be cross-examined on it?"

Levelly, Egan responded: "No, I don't think so. I took a very careful approach to this document, edited it significantly, removed names very frequently, so I don't believe that."

"But," responded Miles, "you're unable to point to any evidence to support that very broad assertion that you make in paragraph 40?"

"Not with respect to Dr Lynch, as you say," said Egan, giving up.

Later in the day, Egan appeared to concede that lawyers had written part of his statement for him. Miles had picked up on a phrase Egan used to describe Autonomy's hardware sales – talking about its "primary motivation" – and commented: "It seems very improbable that you'd ever have a discussion with someone where you'd talk about something being the 'primary motivation' for a deal. It sounds like the kind of thing a lawyer would say rather than something business people would say at the time."

Egan remains on the witness stand this afternoon for cross-examination by Hussain's barrister, Paul Casey. The Register will be reporting on the proceedings. ®