AI has automated everything including this headline curly bracket semicolon

Can someone have a look at that code again?

Something for the Weekend, Sir? This week's [article|column] comes to you fresh from our latest in automated journalism, The RegAIster. We hope [you|they] enjoy [it|them].

Some people will believe [everything|nothing|anything].

It was demonstrated several years ago how statistics-based reporting such as sports scores can be collated and chucked at pre-written natural language text quite reliably by computer. Now the UK's Press Association news service has ramped things up with RADAR, a robot for automatically generating "local" news stories from open data sets held by public bodies in the realms of government, health and police.

I'm reminded of an anecdote from my cousin's husband who had joined his father's sign-writing business as soon as he was old enough to hold a paintbrush. His father had insisted sign-writing was a job for life. "They've not invented a machine to do what we do," he'd chortle.

Well, they did. And now it's my turn.

Except... is this [story|content] all that it seems? To start with, lots of journalism has always been templated, especially the aforementioned sports reports. I witnessed this myself while working as editorial systems support on a newspaper floor. The big match was playing on one of the large TV screens, and just 30 seconds after the final whistle, the completed match report landed in the Sports Desk inbox.

How was this possible? Match-fixing? Time machine? Well, at the risk of bursting your illusions, sports writers absolutely do not watch a match and then sit down to write it up afterwards. If they did, they'd never hit deadline. So what they do is prepare a couple of versions in advance based on the possible outcomes, stuff it with non-committal sports clichés, paste in a few paragraphs of pre-written praise for one goalscorer or another, and insert in the final score just before clicking SEND.

It's all part of the creative illusion. AI-powered robot journalism is similarly smoke and mirrors. It's not quite what people think it is, not least because people think the robots are actually robots. Bleeping, clicking noises, little spinning radar dishes for ears, rubber arms with pincers at the end tapping on a keyboard – that sort of thing.

As any Zen Buddhist might point out, all perception is to some extent illusory and much of it is outright fantasy, existing only in our heads.

Look at social media as an example.

A month ago, teen-fave soap shop Lush announced it was ditching most of its social media channels. Yes, I know, I was devastated too. "Social media is making it harder and harder for us to talk to each other directly," wailed the purveyor of shopping mall smells. "We are tired of fighting with algorithms, and we do not want to pay to appear in your newsfeed."

Nor did I ever wish them to, but I'll let that pass. It seems someone at Lush experienced enlightenment and realised that real customer service meant really engaging with real customers. Endlessly chundering out promotional product photos isn't, unless letting unhinged "followers" antagonise each other online with wild criticism and rape threats is your idea of building a successful brand. Just as there is nothing so unreal as reality TV, there is nothing as unsocial as social media.

My favourite reality check on the unreality of social media came in response to a complaint by a conspiracy theorist on Twitter that they'd been banned by Facebook. "In an authoritarian society controlled by a handful of Silicon Valley giants, all dissent must be purged," they raged. Private Eye's David Ziggy Green commented: 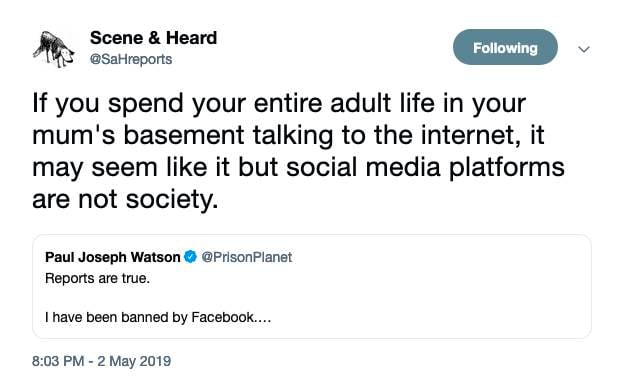 Hey, I'm as suspicious as anyone about Silicon Valley giants but at least my opinion is loosely based on facts I've come across rather than spontaneously conjured up in my head based on other things that also spontaneously popped up in the same head. On the other hand, let's not be too critical. Patronising Mode ON: the general public does not perceive everyday computer tech for what it really is. To us, it's bugs and interfaces. To them it's radar ears and pincer hands.

You see this in typical representations of "high tech" in popular media. You can forgive Hollywood movies but you'd think TV documentary editors would know better. I recently began collecting samples for personal amusement, so please excuse the quality of the following photos until I work out how to screengrab directly from my Sky+ box.

Here's a classic visual illustration of "computer tech" as the voice-over bewails how technology is taking over the world and destroying humanity. 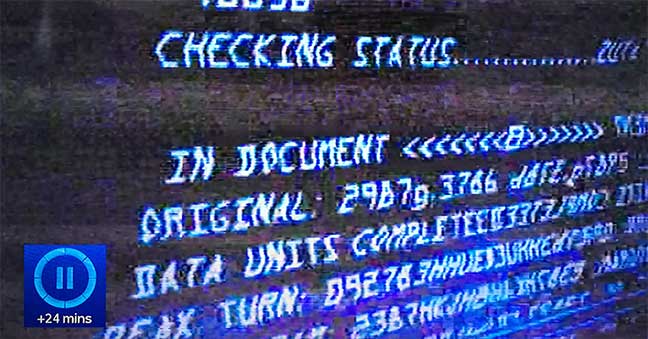 OMG what's this? It might be chkdsk. The end is nigh. 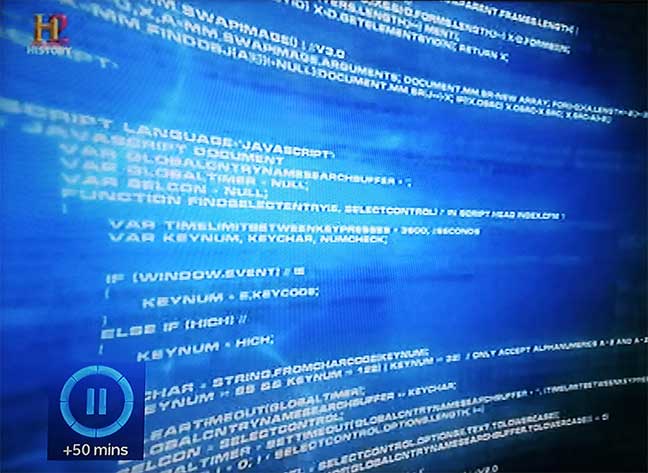 JavaScript? Pure evil. No really, I hate the bastard thing. It's the spawn of the devil himself. 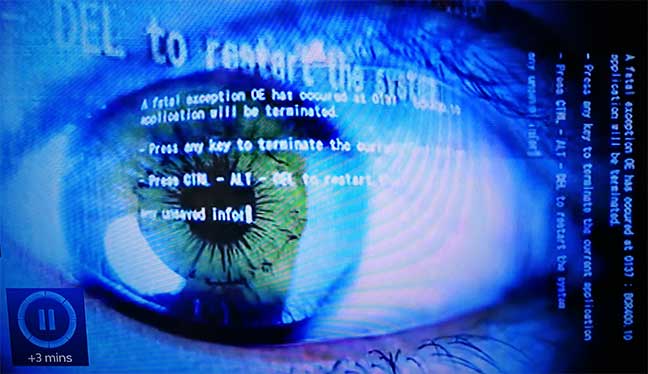 Nothing portrays the overbearing dread of hi-tech taking over as an error message, accompanied by the familiar incantation of that infamously wicked satanic spell as it echoes back to us through the mists of antiquity: "CTRL... ALT... DEL..."

The day will eventually come when creative writing can be fully replaced by an autonomous system (i.e. independent of a human handler) but we're a while off yet and hopefully there's still time for me to send in my invoice.

I'm not too worried either because I sense the way things are going. Given that any and every datum that touches a network of any kind is already routinely trawled for logins and content by a vast array of hackers, phishers, purveyors of penis-lengtheners, governments, Nigerian probate lawyers and the aforementioned Silicon Valley giants, the worst that can happen is that the circle will be completed. That is, we will have reached a stage at which data will be both written and read by robots without the need for any human participation at all.

In the meantime, I suggest we carry on meeting up here each Friday. That's real enough for me, for now.

Alistair Dabbs is a freelance technology tart, juggling tech journalism, training and digital publishing. He has been told that anyone can sound as if they speak a foreign language natively not by learning grammar and vocabulary but by spouting a small number of local euphemisms and clichés. He will soon be in a position to put this to the test. Stay tuned for updates. @alidabbs