It's the art of the deal, folks 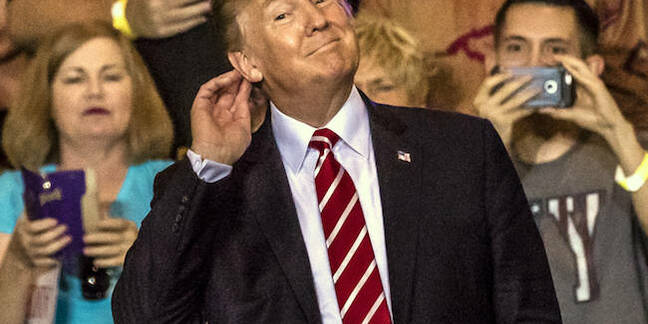 New tariffs imposed today by the US government on Chinese imports will hit the tech industry hard, with everything from semiconductors to networking equipment now taxed at 25 per cent.

The ramping up of tariffs come in an apparent game of high-stakes chicken between President Trump and the Chinese government. Trade talks, soon coming to a conclusion between the two sides, may make for good TV but are causing concern for American businesses who will have to pay significantly more for essential imported components and equipment.

Contrary to public tweets from the president, tariffs don't only hurt the country whose goods they are imposed on, they also impact domestic companies who are forced to pay significantly more for products and materials they ordered months or years ago.

Tariffs are a blunt instrument that can be effective in the medium to long-term but cause significant problems in the short-term, especially if they change repeatedly, as has happened in recent months.

The tariffs impact over 5,200 different categories of products – provided as a long list [PDF] of eight-digit codes that need to be punched into a specific search tool provided by the US Customs and Border Protection to be understood. In this case, the tariffs on Chinese goods are listed as "Section 301" duties that only apply to articles that are products of the People’s Republic of China.

There is a notable exception for products listed under the code 8517.62.0090 which means "other" in the section that covers "the reception, conversion and transmission or regeneration of voice, images or other data, including switching and routing apparatus" – in other words, internet equipment.

A list of products under that classification includes things like Bluetooth headsets, Wi-Fi extenders, some network cards and so on.

While the previous 10 per cent tariff rate on many of these products has irritated business, it was manageable. However a 25 per cent tax, introduced today on $250bn of selected imported Chinese gear, causes a significant financial impact. While business and the markets remain convinced that it is likely to be nothing but a typically brash negotiating tactic from President Trump, it is causing jitters nonetheless, especially with medium-sized businesses.

(Some imported components and products were earlier subjected to a 25 per cent tariff while for others it was 10 per cent, we note; from now on, it's much simpler: a flat 25 per cent on the aforementioned Chinese tech imports.)

Guess who's back, back again? China's back, hacking your friends: Beijing targets American biz amid tech tariff tiff

China responded to the latest tariffs this week by saying that it "deeply regrets that it will have to take necessary countermeasures," and hopes that "the US and the Chinese side will work together to resolve existing problems through cooperation and consultation."

One of the commissioners of the US telecoms regulator, the FCC, pointed out the impact in a tweet this morning. "The tariffs that go into effect today are a 25 per cent tax on the future of technology," noted Jessica Rosenworcel. "All the building blocks of 5G wireless and the internet of things - from modems to antennas to semiconductors - are subject to this new tax. It's not good - for consumers, innovation or US leadership."

Responding to her tweet, the CEO of high-speed ISP Sonic, Dane Jasper, noted: "I believe this also affects fiber optic network components too, such as passive splitters, connectors, optical transceivers, etc. Those are all key for both gigabit fiber to the home, and fiber to the tower for 5G."

And so, at the same time that the Trump Administration has said that getting broadband internet to more Americans is one of its key priorities, it is massively increasing the cost of doing so. It's almost as if national trade deals and tariffs are not the sort of things that should be subject to cheap, showy backroom dealing. ®