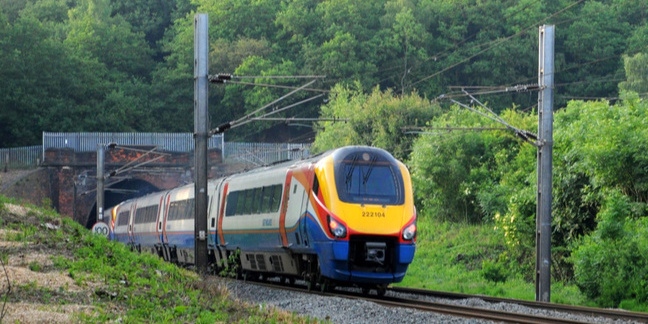 When a mummy and a daddy love each other very much... (DJ Cockburn / Shutterstock.com)

Commuters on London's Wandsworth-Clapham service last Friday morning had yet another reason to awkwardly avoid each others' gazes as grunts and groans from what sounded like a pornographic film oozed out of the train's Tannoy system.

Passenger Paul Brunton did what any self-respecting citizen would and uploaded footage of his journey to Twitter as the driver could be heard applying the handbrake a little too hard.

"Is that coming from the driver?" a fellow traveller can be heard asking.

At least they wouldn't need to be relieved at the end of their shift.

To which the firm responded:

Oh dear 😳🙈 Thankfully not one of our trains or drivers 😂

"We are investigating this incident to establish how this material was broadcast on our service.

"Today's incident is wholly unacceptable and we apologise to customers."

Wandsworth appears in Domesday Book of 1086 as Wandesorde and Wendelesorde – roughly translated as the enclosure of Waendel – apparently a relatively well-off Saxon. The place was valued back then at 12 cow hides, five-and-a-half ploughs and 22 acres of meadow, or a whopping £9. That's less than rosemary-salted and "triple-cooked" potatoes at a nearby pub will set you back.

The three-minute journey from Wandsworth Town to Clapham Junction takes place on a stretch of rail-line that was opened between 1838 and 1863. It's not known where the passenger embarked and even less clear where the announcer or guard, er, ultimately got off but Shepherd's Bush, Cockfosters and Mudchute are all very possible. ®

Bork!Bork!Bork! May we present the BSOD on Wheels