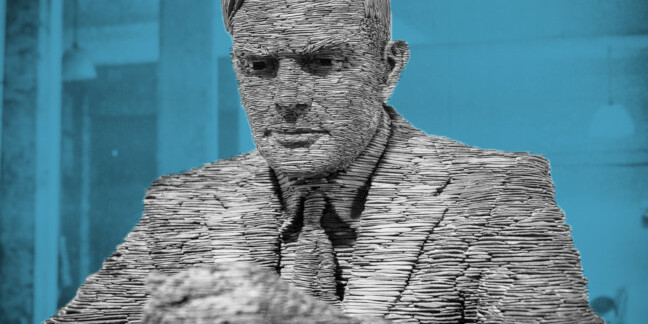 A curse follows Enigma, the cryptography device deployed by Adolf Hitler's military during the WWII to protect their Morse communications from the Allies. That curse? Invisibility.

Alan Turing has - now - become intrinsically linked with cracking Enigma, a machine of fiendish complexity capable of 159 million, million, million (1.59×1020) settings that demanded the perfect marriage of mathematics and engineering to break. Turing's work would blow open secrets that helped alter the war - for example, alerting the RAF to Luftwaffe raids during the Battle of Britain. And yet, Turing received little by way of the recognition he deserved for decades - quite the opposite, in fact.

But Turing is not the only one to have suffered Enigma's curse of invisibility. Join The National Museum of Computing on June 26 for a special Register lecture journey back 80 years to the eve of the Second World War, to hear the stories of those behind Turing.

Hear about who provided a critical leg-up to the struggling English in cracking Enigma and who helped build the Bombe - the device to mechanise the mathematics of code breaking. Eight decades after the start of the War, TNMOC will go inside the pioneering work of the Polish General Staff Cipher Bureau in Warsaw and shine a light on the roles of Gordon Welchman and Doc Keen, the long-overlooked Bombe engineering team lead, at Bletchley. Together, they helped put code-breaking at Bletchley Park on an industrial footing.

Your guide for this crypto history trip will be Paul Kellar MBE, a leading member of the Bombe Rebuild project - based at TNMOC as a working tribute to those who contributed to breaking the Enigma.

Starring with Paul will be a working Enigma to help demonstrate "knowing your enemy" and illustrate how the Bombe could attack and break the Enigma on a daily basis. You will get the opportunity, too, to participate in a live code-cracking exercise with Checking Machine - the last stage in recovering the Key of the Day after the Bombe had found the crucial settings.

Join fellow Reg readers with the TNMOC crypto historians and their machines at the Rugby Tavern, 19 Great James St, London, WC1N 3ES. Doors open at 18:30 BST with Paul taking the mic at 19:00. An audience question-and-answer session will follow a break to re-charge mind and grey matter. Get your ticket here. ®

Missing Alan Turing memorabilia to be returned to Blighty from the US, 36 years after it went walkabout

A win for 2020: Polymath's possessions headed back to Sherborne School

‘Alan Turing law’ to give posthumous pardons to 59,000 men for 'gross indecency'