Amazon’s Away Teams laid bare: How AWS's hivemind of engineers develop and maintain their internal tech

The principles of Amazon service-oriented collaboration

Here’s how Amazon’s service-oriented collaboration works based on our research:

These principles operate somewhat differently based on the part of Amazon that is using them.

For example, older products such as Amazon.com or Kindle may use services from all three of these layers. Newer products like the Alexa and Echo tend to use more of the public services on AWS.

There have been many generations of evolution from legacy to MAWS to AWS and also with respect to development tools. All of these changes happen in waves that may take years to complete.

The teams outside AWS proper are less likely to have a P&L at the service or team level. In general, AWS teams are known for having the most methodological purity, a state in which the service, team, and P&L have the same boundary.

Keep in mind this picture was assembled from talking to many people with different perspectives at different levels of the organization. It would be wonderful to make it sharper. But finding someone who knows the whole picture and detailed history is not easy. Amazon PR staff take note: we are always ready to sit down with Werner Vogels, Amazon CTO, and go over the details.

Amazon’s model encourages direct team-to-team, service-to-service collaboration, providing principles for collaboration so that as much progress as possible can take place based on each team optimizing the services it needs directly.

As your correspondent came to understand Amazon’s model, I realized that the structure of service-oriented collaboration used levers for acceleration that have been documented by two celebrated researchers who have studied how technology development can be optimized.

MIT professor Eric Von Hippel’s research into user-driven innovation shows that when the user is given direct access to the means for creating a solution, potentially at least, tremendous innovation can result. The "sticky information" that otherwise must be rendered into requirements documents or transferred from user to builder is difficult and never complete. When this step doesn’t have to take place because user and builder are the same person or same team, the outcome is much better. Amazon’s Away Team model embraces this concept and allows teams to create building blocks that have ideal fit to purpose. 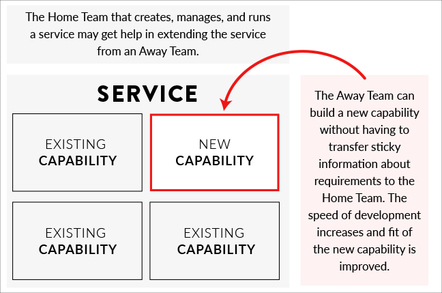 Ray Kurzweil’s analysis of the exponential pace of technology development provides another lens through which the power of Amazon’s model can be explained. Your correspondent has summarised Kurzweil’s model in Research Mission on Technology Leverage, but his thesis is as follows:

Kurzweil’s research shows how in many different areas of technology, this pattern has held throughout history. At Amazon, my view is that we are still in the early stages of this exponential curve, which is being driven by use of services both inside and outside of Amazon.

Amazon’s model wouldn’t work without data from usage driving funding and optimization. End-to-end teams and Away Teams play a crucial role in identifying new services and improving the fit of existing services. 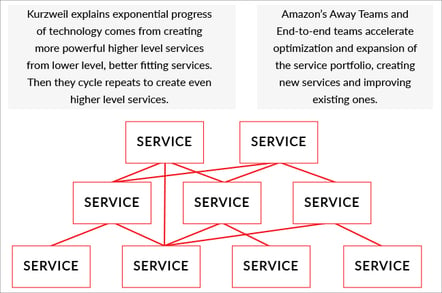 Right now, AWS has focused on creating general purpose higher level services that all fit into a generic platform for software development. The highest level services are being created on top of the platform by Amazon itself (Amazon.com, Alexa, Kindle, etc) and by AWS customers who are building all sorts of products and IT infrastructure.

Next page: The properties of Amazon’s service-oriented collaboration
Page: