Anyone still worry about the Microsoft monopoly? Executive director of the Eclipse Foundation Mike Milinkovich does.

Following GitHub's announcement of an integrated package registry, he snarked on Twitter:

A monopoly on both development experience and artifact pipelines. Just what I always wanted when I imagined the future. Not.

The Eclipse Foundation oversees numerous open-source projects including Jakarta EE, the open-source Java Enterprise Edition. It is also the home of the free Eclipse IDE, among the most popular IDEs for Java development.

One of the original Eclipse designers was Erich Gamma, who in 2011 joined Microsoft where he has worked on Visual Studio Code, Microsoft's open-source and cross-platform development tool.

Visual Studio Code has been a remarkable success. A recent Stack Overflow survey ranked it as the most popular development environment overall. Eclipse still leads for Jakarta EE development, according to its own survey (PDF), though VS Code puts in a decent showing (considering it is a relative newcomer) at 28 per cent usage (below). 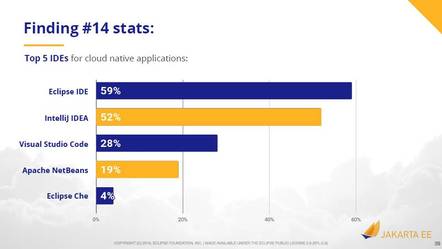 With GitHub, VS Code and now package registry, could Microsoft be too dominant? The Register asked Milinkovich to expand on his concerns.

"Monoculture is likely the better word," he said. "GitHub + VS Code already represented a very large concentration. A properly curated, universal package manager is sorely needed, so they're definitely meeting a need. But wouldn't it be ironic if all paths used by open-source developers lead to Microsoft?"

The context of this complaint is memories of Microsoft at the turn of the century, with Windows everywhere and the Internet Explorer 6 browser choking web development. Some of the impetus behind the original development of Java was to resist this monopoly with a programming platform that did not depend on Windows.

The lever that unseated Microsoft, though, was not Java but mobile and cloud. The company today makes a play of its Linux adoption, and its .NET developer platform is largely open source.

Why did Microsoft acquire GitHub in June 2018? Speaking to analysts following its latest financial results, CFO Amy Hood remarked that "we will invest aggressively in strategic areas like Cloud through AI and GitHub", positioning GitHub as a driver for cloud adoption. The company will make it easy to deploy code from GitHub to Azure, but it is a delicate balance since too tight an integration would cause users to migrate away. Microsoft seems aware of this tension and to date has been careful to preserve the platform-neutral GitHub character.

"We understand that developers need more than one tool and we believe in giving developers choices to select the tool that best meet their needs," GitHub's Bryan Clark told The Reg.

Fears of development monoculture seem overblown at the moment then. The the impact of VS Code on Eclipse usage, though? That is real. ®