Honey, hive had it with this drone: Couple lived for years with thousands of bees in bedroom wall

Come for the enterprise tech, stay for the tortured puns 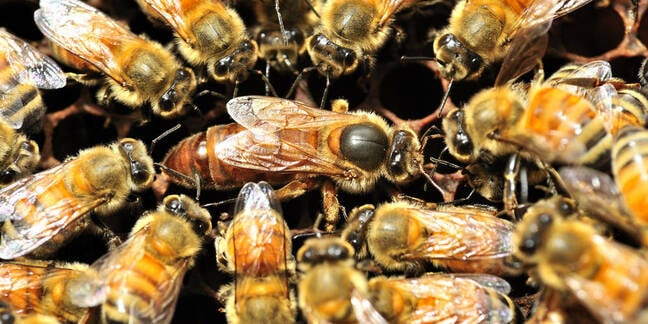 Most of us not fortunate enough to dwell in gated manors in the countryside hive to endure a simple truth – noisy neighbours can bee annoying. One Spanish couple had 80,000 of them, living in their bedroom wall.

For nearly two years, the Granada residents were kept awake by a persistent buzzing next to their heads. According to The Local, each night they would puzzle over the sound's origin. "Is it the neighbour's washing machine? Or maybe someone's air conditioning?"

Inexplicably, it took the bumbling pair all that time to put their ears up against the wall and finally rule out appliances and electrics. They were in for quite the apiculture shock.

They got on the blower to a local beekeeper, who confirmed their fears and helped to relocate the infestation.

Yay, we got a B for maths. Literally, a bee: Little nosy nectar nerds smart enough to add, abstract numbers

"With a hive that big it's a wonder they didn't have a constant buzz in their ear," said Sergio Guerrero, the man that came to the pair's aid. "I can't understand how they've been able to live with them for the past two years."

Guerrero, who has rescued more than half a million bees in Andalusia this year, reckoned recent (s)warmer weather extended the hive's reproductive period to six months from the average of two.

For context, a queen bee, who lays sole claim to reproduction rights in a hive, can pump out 1,400 eggs every day. That's got to sting a bit. ®

Scientists watch from 1,000 miles away as Charlie the Rover plays with ExoMars' toys