Why random plans made in pub shouldn't always be acted upon

Three men we can safely call geeks are looking for help to restore an IBM 360 mainframe they rescued from a soon-to-be-demolished factory in Germany.

One Monday evening in late April, Adam Bradley and Chris Blackburn were sat in the pub when they chanced upon a listing for an IBM 360 Model 20 or, as the German ad put it, "a relatively rare plant Puma Computer IBM 2020 probably from the 1980s in red".

Despite some fairly useless pictures and a stern warning that the machine had to be collected from Nuremberg within 14 days, some frenzied bidding ensued.

A quick flight to Nuremberg later...

On entering the abandoned building that housed the Big Blue hardware, there were were a couple of minor issues. The accessible door was up three steps and could only be opened 45 degrees - IBM 360s weigh over 600kg. The other door had not been opened in decades, there was no key and the false floor had been built up to it. The machines were wired in place through the raised floor and surrounded by detritus. The wheels had sunk through that raised floor.

Undeterred, Adam returned to Blighty where a van was duly hired and stuffed with tools. The pair – joined by Chris's dad, John – then returned to Germany.

A quick trip to Bauhaus, Germany's finest DIY store, and they were ready for action.

The steel shutter and old door were removed with the help of crowbars. A ramp, solid enough to support mainframe and peripherals, was built and fitted to get over the concrete step.

Then they made a start on uncabling the machines with the help of PlusGas, labelling as they went. They also made a great discovery – a set of Field Engineering manuals.

The van was packed up and, stopping only to fill any gaps with Belgian beer, Chris drove back to the UK. 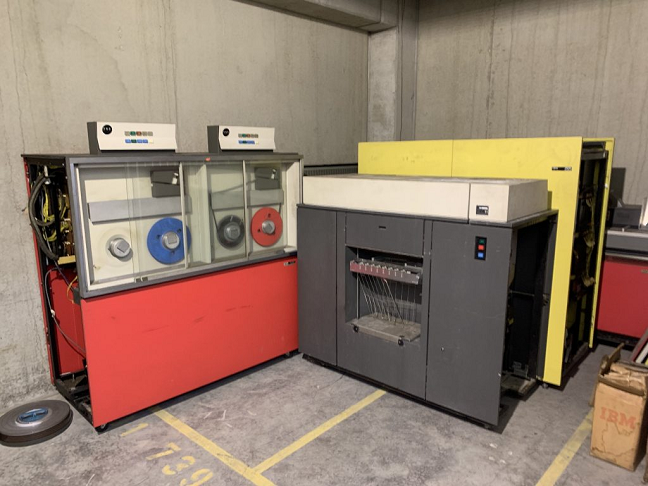 Last week they returned to actually get the machines out of the building and into storage. A larger van, replete with tail lift, was hired in Nuremberg. They started by shifting the punch card library and disk drives up the ramp and into the van.

With the help of a couple of Swiss mates, they got the 370 Processor, the Slave tape drive, and the large printer into the van.

This was all transferred to a rented storage unit.

The next day was the biggest job. Everything left was wired in under the false floor and hadn't been touched for 30-odd years. Cables were brittle, extremely difficult to trace and then access.

Despite almost destroying the van's hydraulic ramp, with the help of a couple of kind blokes from the glaziers next door, they got everything out the building and into storage. 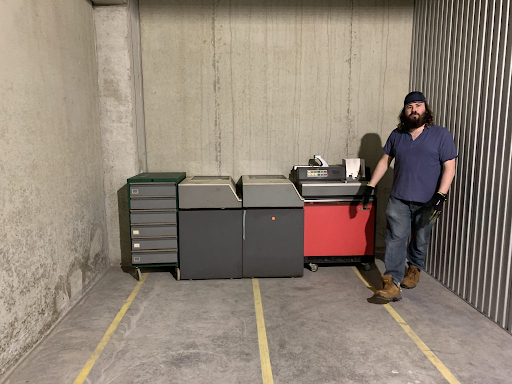 The next stage requires a man with a very large van to help them get the kit back to the UK so they can start restoring it.

Adam told us: "Our current focus is on getting the machine here and digitising the documentation. If anybody has a way to safely and slowly optically read 80 column IBM punched cards that would be extremely helpful.

"We also could do with access to specialised scanning equipment e.g. A0 Scanners and book scanners to digitise and share the full set of Engineering manuals we've got.

"Other than that I can't give any specifics as to what we need as we need to review the condition of the machine once it's landed and accessible."

There's a lot more info and a ton of photos on the project blog here.

The lads are looking for ex-IBM engineers or electronics engineers with a taste for rust to get in touch.

They're being helped out by responsible adult Peter Vaughan, an engineer and volunteer at the National Museum of Computing where he looks after the IBM 1130.