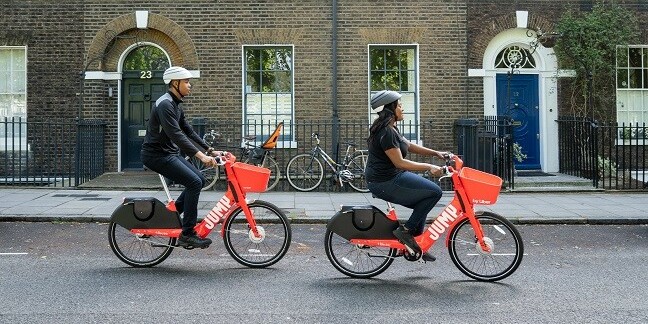 From today folk in Islington, London, can hire an electric bike off Uber rather than a cab.

350 electric bikes have been scattered around the borough as part of a trial which will be extended across the city in the next few months.

The bikes' electric assist is limited to 15 miles per hour.

Uber assured us that all bikes will be responsibly parked at the end of trips: "All JUMP bikes are GPS tracked and have built-in cable locks which have to be locked to end the trip. Together with clear guidelines in-app and on all bikes, this helps avoid cluttering and ensures that the bicycles are properly parked."

The company said users will be fined £25 if they leave the bikes in no-parking zones. The bane of dockless bike and scooter schemes, apart from idiot riders, is users dumping them on the pavement at the end of a journey.

The bikes cost £1 to unlock and are free for the first five minutes. After that it's 12p a minute, all charged to your Uber account.

Jump has launched in 12 cities in the United States as well as Madrid and Paris with plans to launch in Berlin, Brussels and Lisbon soon.

But despite its deep pockets Uber is not first to the party. There are several rival firms already putting wheels on the ground.

Best known is probably Lime which offers scooters and bikes in cities across the US as well as in Australia, 13 countries in Europe and cities in Colombia, Mexico, Israel, Singapore and Uruguay.

Uber is one of many operators offering shared vehicles in Madrid. The council banned the devices in October last year but has now allowed around 18 providers of electric scooters, mopeds and bikes to launch. Their battle for top spot is not without controversy: unused devices litter the pavements and squares across the city.