All kinds of software is moving into lightweight application containers, and the fact hasn't been lost on Nvidia – the GPU supremo has launched a platform for machine learning at the edge of the network, based on Kubernetes.

EGX is compatible with all mainstream devices made by Nvidia, from the tiny Jetson Nano boards used for prototyping (shipping in June) to full racks of T4 GPUs typically found in cloud data centres.

It is meant to simplify the task of collecting information from the sensors and running it through machine learning algorithms to get a response in real time, without having to haul the data back to a corporate bit barn.

The platform was created with Red Hat and uses its OpenShift container orchestration software. It was unveiled at Computex in Taipei, the world's largest computer show.

EGX marries OpenShift with Nvidia's Edge Stack – which includes drivers, a CUDA container runtime, a CUDA Kubernetes plugin, CUDA-X libraries and a selection of containerized AI frameworks and applications, like TensorRT for TensorFlow inference, and DeepStream for computer vision. 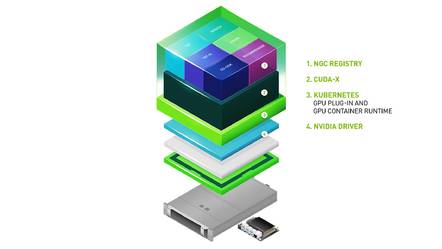 All "cloud-native" applications – those packaged in app containers – can run on EGX, and any applications developed for EGX can run in any major public cloud.

It has also tested for compatibility with networking kit from Mellanox and Cisco, for customers who want to run EGX on-premises.

The platform is positioned for applications in industries including telecommunications, healthcare, manufacturing, retail and transportation. Early adopters of EGX include Foxconn, which uses machine learning to scan for factory defects on PC production lines; GE Healthcare, which uses algorithms to speed up the MRI process; and Seagate, which has deployed ML to inspect the quality of hard disk read-and-write heads.

"The Nvidia EGX platform dramatically accelerates inference at the edge, allowing us to see subtle defects that human operators haven't been able to see in the past," claimed Bruce King, senior principal data scientist at Seagate. "We expect to realise up to a 10 percent improvement in manufacturing throughput and up to 300 percent ROI from improved efficiency and better quality." ®