Just a 16% chance of being banged up for computer misuse

Analysis Nearly 90 per cent of hacking prosecutions in the UK last year resulted in convictions, though the odds of dodging prison remain high, an analysis by The Register has revealed.

Government data from the last 11 years revealed the full extent of police activity against cybercrime, with the number of prosecutions and cautions for hacking and similar offences being relatively low.

Figures from HM Courts and Tribunals Service revealed there were a total of 422 prosecutions brought under the Computer Misuse Act 1990 (CMA) over the last decade, with the figure rising to 441 including the year 2007.

Criminals convicted of CMA offences were quite likely to avoid prison in 2018, with just nine (including young offenders sent to youth prisons) receiving custodial sentences out of 45 convictions. Among those were Mustafa Ahmet Kasim, the first person ever to be prosecuted under the CMA by the Information Commissioner's Office. A further dozen CMA convicts received suspended sentences in 2018.

Between 2008 and 2018, 79 people – 24 per cent of the total prosecuted in that period – were found not guilty at court or otherwise had their cases halted. Of the guilty, 16 per cent were given immediate custodial sentences. That number comes up to 45 per cent if suspended sentences are included.

The CMA is the main statute used to prosecute hackers, as well as some data-related crimes such as securing unlawful access to computers and their contents.

The odds of getting off with a police caution instead of a full-blown prosecution for a CMA offence were exactly 50:50 in 2018, with 51 cautions being issued as well as 51 criminal court cases. In those 51 prosecutions, 45 defendants were found guilty, a rate of around 90 per cent – slightly above the usual average across all criminal offences of around 75-80 per cent of prosecutions resulting in a guilty verdict. 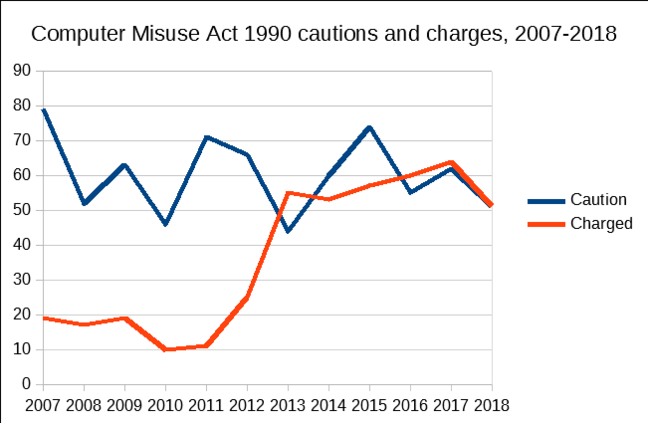 The 2013 jump in prosecutions could be explained by that being the statistical year after Theresa May, as Home Secretary, withdrew her extradition order against accused hacker Gary McKinnon, signalling a greater willingness to prosecute at home rather than extradite.

Among the lucky six to be found not guilty in 2018 or who otherwise had their cases stopped was Crown court judge Karen Jane Holt, aka Karen Smith, whose prosecution under the Computer Misuse Act was halted by order of another Crown court judge.

The most common range of fines fell between £300 and £500, with one criminal having been fined more than £10,000 last year – the only one to be so punished since 2012. In general, around five fines were issued per year for the last 11 years.

In the 11 years' worth of data analysed by The Register, just one person got away free with an absolute discharge from court (in 2017) after being found guilty. A maximum of six people per year received conditional discharges, with last year featuring just three. Community sentences accounted for a total of 95 disposals from court since 2007, with 15 of those having been handed out last year.

Don't worry about rotting behind bars

Even when a prison sentence was handed down by judges, the duration was relatively short. Over the past decade, the most frequent sentence lengths fell between 6-9 months and 18-24 months. Current UK sentencing laws automatically halve prison sentences in favour of release on licence, with release from prison usually being a bit earlier again than half the headline figure, as a criminal barrister explains on his website.

The figures could be interpreted to show that Britain is a relatively forgiving jurisdiction for computer hacking crimes, something this story advertising an IT security startup staffed with young grey hats may or may not bear out.

Not every CMA prosecution is started because of hacking, it is important to note, though the law is often used for hacking cases. In 2017, a former Harrods IT worker, Pardeep Parmar of Hitchin, pleaded guilty to a CMA offence after being let go from the posh department store and taking his work laptop to a local computer shop, asking to have it taken off their domain. Similarly, a former Santander bank clerk, Abiola Ajibade of Consort Road, Southwark, pleaded guilty after having been caught accessing and sending customers' details to her then boyfriend.

"Cybercrime has become accepted as a low-risk, potentially high-reward activity for organised criminals. If they act professionally, they can make substantial sums of money with very little chance of being caught," opined Richard Breavington of law firm RPC, which also obtained some of the data. ®