The RPG Greetings, traveller, and welcome to The Register Plays Games, henceforth known as The RPG, a column that will run on the last Friday of each month. All genres, AAA studios, indie devs, just out or decades old – nothing is off-limits, but it'll likely have to be something fun and hopefully even new to you.

Blood stains the sand. Flies flit between the broken bodies strewn across the courtyard of the Dust King's Tower. He doesn't live there anymore. Moments earlier, a dozen or so reavers broke through the gates and drew out the leader of the Dust Bandits, knocked him unconscious and ran off with him slung over their strongest shoulder. The 30,000-cat bounty on his head will do nicely. 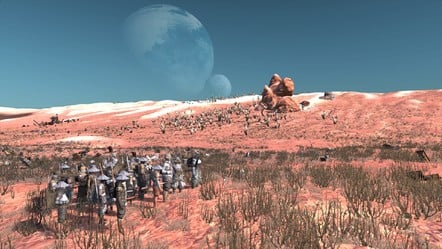 But the raiders weren't without casualties. The king's guards fought hard and a recent recruit by the name of Logan remains face down in the dirt just outside the gates, bleeding to death. His comrades were unable to drag him away for fear of being felled too, and now footsteps approach. Slavers. 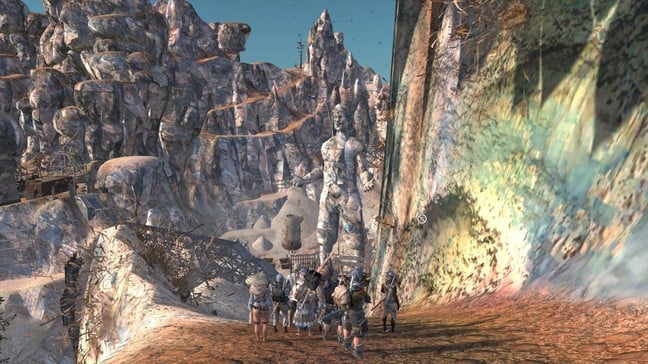 Approaching Rebirth ... Some kind of religious endeavour built by slaves

I watch somewhat helplessly as heavily armoured people traffickers bandage my guy and march him off to a location unknown. They must have heard the clamour of battle – always ripe for pickings. I can't do anything with the injuries my characters have sustained so I hurry them home (we've bought a lovely piece of real estate in a nearby city) for R&R. Then I begin hatching our rescue plan.

There is no "story" in Kenshi, an ambitious sandbox survival, real-time strategy, role-playing hybrid released December 2018. The player is not led by the nose through a narrative, and yet stories happen all the time. You set the agenda and every choice has its own spiralling set of consequences – which aren't always positive. If this was Dungeons & Dragons, Kenshi would be the dungeon master trying their darnedest to kill you. Much like the 2010 classic Mount & Blade: Warband, the world of Kenshi goes on with or without the player's input. Factions wage war, merchant caravans crawl across the wastes and cannibals eat each other. Or, as in this case, opportunistic thugs enslave one of your number. 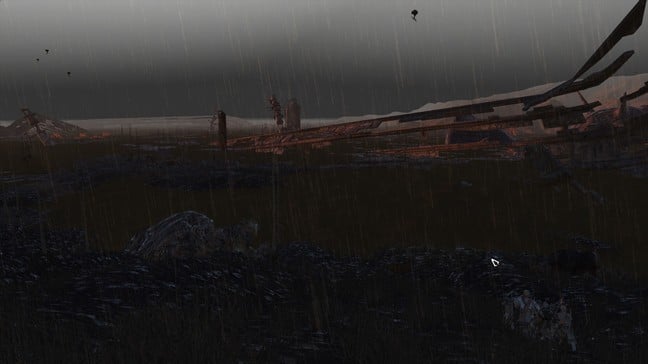 The Floodlands ... Crawling with murderous robots

And what a world it is – 870km2 of multiple biomes and regions dotted with cities, outposts and ruins, one of the largest static game maps around. Kenshi explains little about its setting outright, drip-feeding lore either through books and letters found across the land or by talking to the many characters who call it home. It is, however, a Tatooine-esque desert planet many thousands of years after the catastrophic fall of a high-tech society, gargantuan remnants of which litter the landscape. It's "sword-punk", according to its creator – the most sophisticated weapons are crossbows and the cultures depicted take cues from feudal Japan. 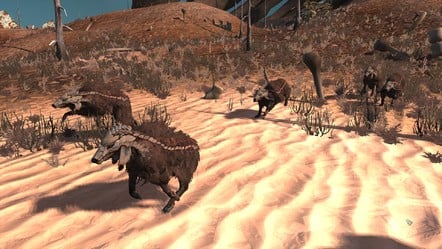 Bonedogs ... Dangerous, but not the worse thing out in the wastes by far

There are many starts to choose from and while some are easier than others, all are unforgiving. Whether beginning as a slave, missing limbs in the middle of nowhere, or just a trader outside a lawless city, in most cases you are dumped in the world naked, weak and destitute. You aren't the chosen one and you can barely swing a club. It's up to you how to seek fame, fortune or both. 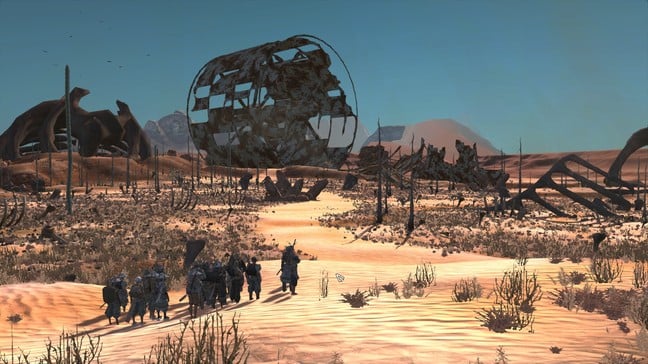 Approaching the city of Mourn ... Days of marching to get here

But from humble beginnings, it is entirely possible to build an army and stronghold to rival the most powerful empires by steadily bringing recruits into the fold. Certain characters can be hired from dens of iniquity throughout the land, and they can help maintain your outposts through an automated "jobs" system – whether mining, farming, smithing or building – to keep the fires of industry burning while the rest are out marauding. 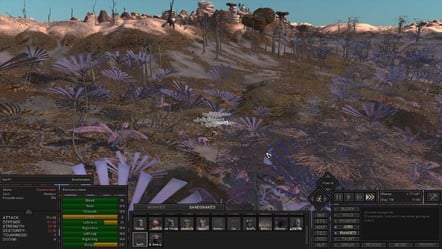 How gameplay looks most of the time ... A clusterfuck of names

Gameplay generally takes place from an overhead perspective with the ability to zoom in far enough to almost see the lice crawling on your characters and a 360° rotatable camera. Controls will be familiar to anyone who has played any strategy or isometric RPG – click/drag to select units, point and right-click to move or whack things and so on. 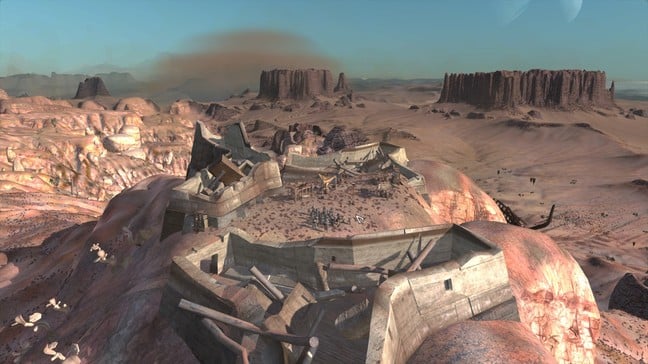 Combat, which for the first 10 hours or so will mostly have you running in terror, is perhaps one of the simpler aspects of an incredibly deep and detailed game. When units clash, victory mostly depends on character stats – whoever has the higher numbers in each skill (strength, dexterity, defence etc) tends to win one on one. There are no "abilities" or "spells" to utilise beyond micromanaging unit positions. 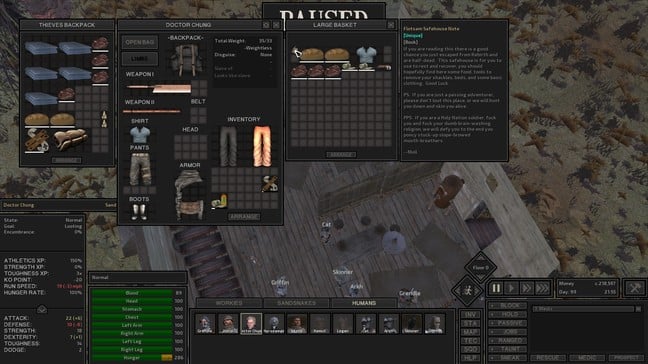 The inventory system ... Plus sweary note left by a clan of ninjas

The art, however, is in the training. The more a character does something, the better they become at doing it. And although your ass will be handed to you frequently in the early stages, it is heartening to see your squads gradually prevail over greater threats. Besides, lost limbs can be replaced with bionic improvements. Each body part has its own hit points, and getting dunked on isn't always a death sentence. Characters injured severely enough will fall into a coma to be rescued and nursed back to health – if they haven't already bled out. 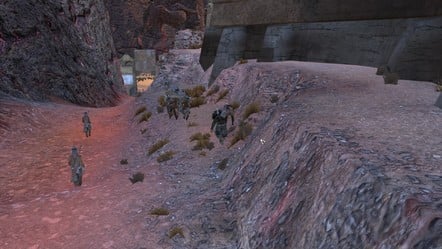 Seeking a fresh bounty ... It took a while to figure out where to hand the crim in, but there's no hand-holding in Kenshi

Though Kenshi's graphics are dated (processing power is slurped by the world simulation), gameplay trumps all and there are still plenty of opportunities for epic vistas. But considering the depth of the game, it's astounding that it is mostly the work of one Brit, Chris Hunt, who started development from 2006.

He took a job as a security guard to make ends meet while devoting free time to Kenshi until 2013 – when, thanks to Steam's Greenlight and Early Access schemes (allowing gamers to buy and play titles long before they are actually finished), he was able to hire a small crew to help.

A 1.0 was shoved on it at the end of last year to little mainstream fanfare. Yet the result is an impressively fleshed-out and immersive indie experience – though not without bugs and optimisation issues – which, with the already enormous modding community, could have RPG and strategy nerds hooked for years to come. ®