Free open source office suite gets better, but use the redaction tools with care

The Document Foundation has released the first beta of LibreOffice 6.3, with new features including a redaction tool and a Fourier Analysis spreadsheet function.

LibreOffice was forked from OpenOffice in 2010, which is when The Document Foundation was formed, including a team of OpenOffice contributors. OpenOffice has also continued and is now Apache OpenOffice. The default format of both suites is OpenDocument, an ISO standard.

Version 6.3 is planned for full release in mid August. There are new features of which the most notable is the built-in redaction tool. Existing proprietary tools do not support open document formats, the release notes explained.

The new tool works by converting the target document to a LibreOffice drawing. You then blank out parts of the document by placing shapes over the offending words. Finally, the redaction tool offers a "Redacted Export" option, which creates a PDF in which the document becomes a bitmap with no selectable text. 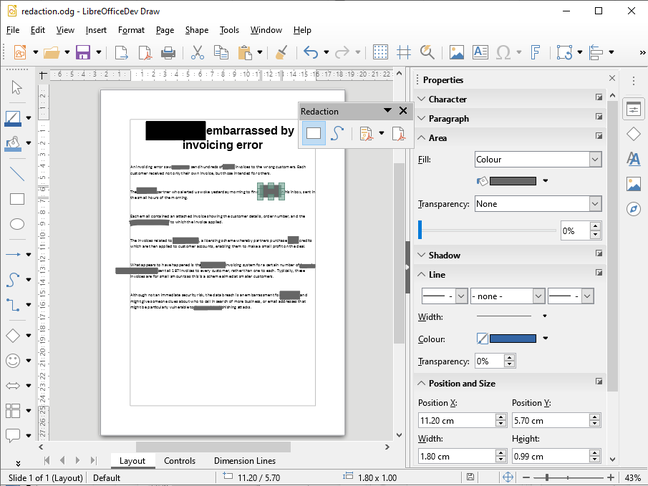 Redacting a document in LibreOffice 6.3

Use the redaction tool with care. Only Redacted Export works. If you save as a drawing, or use the "Export directly as PDF" option – curiously also offered on the little redaction toolbar – it is trivial to remove the redaction simply by selecting the shapes and deleting them. Apparently this is intended for sharing the redaction as a "verbatim copy for review", but it is easy to see how this might be misunderstood.

There is also a new spreadsheet function called FOURIER. You can use the Fourier Analysis option in the Data – Statistics menu in Calc. This function was developed by Dennis France, whose description you can read here.

Another change is that soffice.bin (the main executable, which still reflects the original Star Office name of the suite) now works correctly from the command line, where you might use it for functions like converting documents. Output to the console was previously unreliable, but "now LibreOffice has proper console mode on Windows," said contributor Mike Kaganski.

LibreOffice also has an online version, though this is not offered directly by the Foundation. LibreOffice Online needs to be hosted and requires the configuration of cloud storage. It is available from LibreOffice sponsors Collabora and others.

The software runs on Windows, Mac and Linux and is a popular free and by default option with many Linux distributions. It has a faster pace of development than Apache OpenOffice, as well as a key interoperability feature that OpenOffice lacks: the ability to save in Microsoft's Office Open XML formats.

Microsoft will not be too much troubled. The company has integrated Microsoft Office with its Office 365 cloud services, and this, combined with a massive range of features and continued use as a de facto standard in business, keeps most users hooked.

Choice is good though, and recent incidents like the US government's crackdown on Huawei and others are a reminder that the value of open source is not just a matter of feature-by-feature comparisons. ®