Video Scientists studying the degradation of lithium-ion batteries believe fast charging will damage the power packs faster than one might expect.

Boffins at Purdue University in America say they made the discovery while conducting atomic-level scanning of fast-charging lithium-ion battery electrodes. The team, led by Kejie Zhao, an assistant professor of mechanical engineering, used multiple scanning techniques and computer-aided enhancements to take a deep dive into a particular power pack, and found what may be the Achilles' heel of fast charging.

Essentially, what happens is that fast charging seemingly damages the battery's electrode particles, forcing the device to lose capacity and shorten its lifespan. This degradation is caused by lithium ions whizzing between internal electrodes, we're told.

"These fast charging batteries are often decked out with thicker electrodes, but that doesn't prevent damage," explained Zhao this week. “The capacity of batteries doesn’t depend on how many particles are in the battery; what matters is how the lithium ions are used."

To study how the unnamed commercially available li-ion battery changed as it was charged and discharged, the team built a detailed 3D model of the device using imaging techniques described in two papers published in Advanced Energy Materials and the Journal of the Mechanics and Physics of Solids.

Here's, simply put, how it all came about. The team obtained a crude image of the lithium-ion battery using x-rays. These were generated at the European Synchrotron Radiation Facility and the Stanford Synchrotron Radiation Lightsource of SLAC National Laboratory. The lithium-ion battery was placed between the source of x-rays and a detector. The electromagnetic beams traced the outlines of the battery’s internal structure, and these scans were collected at the detector.

By scanning the battery at various angles, a series of 2D images was generated and stacked to create a 3D rendering. Specifically, the planar images were converted into three dimensions using a filtered backprojection algorithm. Ultimately, artificially intelligent systems allowed the researchers to pinpoint areas of damage, it is claimed. 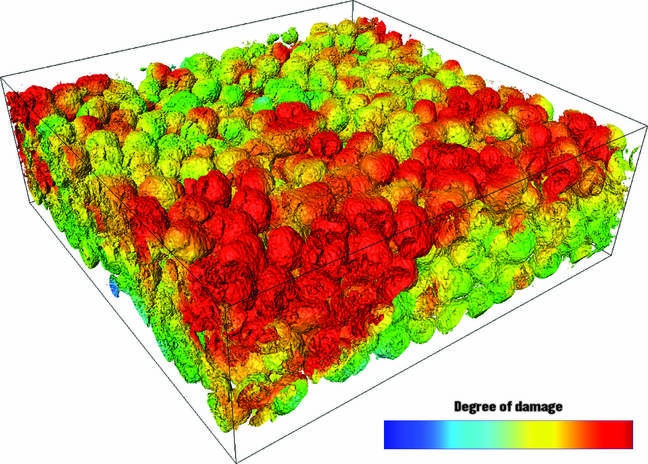 According to Purdue Uni's Kayla Wiles:

Every time that a battery charges, lithium ions travel back and forth between a positive electrode and a negative electrode. These ions interact with particles in electrodes, causing them to crack and degrade over time. Electrode damage reduces a battery’s charging capacity.

The project's generated images and models are featured in this video, below:

Trying to figure out ways to solve battery degradation is a major research problem that involves all areas of science. Before eggheads can begin to think of improving lithium-ion batteries, however, they need to understand the exact mechanism that leads to degradation. ®