NASA on Friday said it is opening the International Space Station for commercial business, a policy change expected to lead to employees of private companies working aboard the ISS as early as next year, with tourists to follow.

"We are announcing the availability for private astronauts to visit the space station on US vehicles, and for companies to engage in profit-making activities on the station," said NASA CFO Jeff DeWit in a press briefing.

NASA astronauts already perform experiments on behalf of companies and research organizations; under the new rule, the space agency will allow up to two private astronaut missions annually to the ISS. The missions may be up to 30 days and must require a microgravity environment, have some connection to a NASA mission or help to build an ongoing low-Earth orbit economy.

NASA says it will support private mission with up to 5 per cent of its annual allocation for crew resources and cargo, which includes up to 90 hours of crew time and 175 kg of cargo.

The US space agency is undertaking this change as it prepares its Artemis Lunar Mission to put the first woman and another man on the moon in 2024. It's doing so in the hope that private industry will play a supporting role in expanding the human presence beyond Earth.

"The commercialization of low-earth orbit will enable NASA to focus resources to land the first woman and next man on the moon by 2024 as the first phase of creating a sustainable lunar presence to prepare for future missions to Mars."

President Trump on Friday weighed in via Twitter, indicating that he's not so keen to hear about the Moon, despite supporting the plan less than three weeks ago. Instead he wants more focus on Mars, and displays with some novel ideas of planetoid distribution.

For all of the money we are spending, NASA should NOT be talking about going to the Moon - We did that 50 years ago. They should be focused on the much bigger things we are doing, including Mars (of which the Moon is a part), Defense and Science!

Suggestions include: providing accommodations like sleeping facilities, toilets, galleys for visitors; research and development facilities; in-space manufacturing for use on Earth (eg fiber optic components) or in space (eg spacecraft parts); entertainment; advertising; transportation to and from low Earth orbit; and large structure assembly , such as satellites or the spacecraft to take us to Mars.

Also among these opportunities is that space tourism, which began in 2001 with American millionaire Dennis Tito's trip to the ISS, could be normalized.

However, NASA has published a price list that underscores the fact that space is not a budget travel destination. Private astronauts will want regenerative life support and toilet facilities ($11,250 per person per day), supplies like food, air and exercise gear ($22,500 per person per day), power ($42 per kWh), data downlink ($50 per GB), and storage ($105 per Cargo Transfer Bag Equivalents per day). And that's on top of the cost of getting there and back to Earth, up to 90 hours of ISS crew assistance, and other expenses like trash disposal ($3,000 per kg). 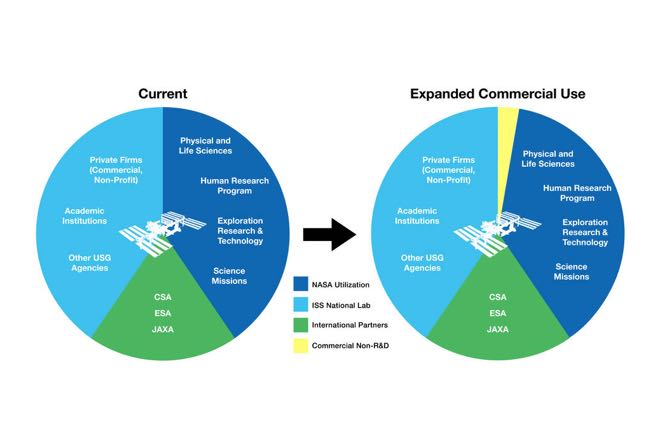 As noted during NASA's press conference, a key factor in commercializing space will be reducing associated costs. Doing so without compromising safety will remain a challenge for the foreseeable future.

"NASA realizes that we need help," said Bill Gerstenmaier, associate administrator of NASA’s Human Exploration and Operations Mission Directorate. "We can't do this alone. We need everyone to help us moving forward."

Everyone except China. NASA has published solicitation guidelines for private entities interested in space commercialization aboard the ISS. A key requirement is that those affiliated with the Chinese government or Chinese companies may not participate. ®